The Daily Nexus
News
Conservative Campus Group Turning Point USA Establishes Itself at UCSB
May 6, 2022 at 2:09 pm by Mark Alfred

UC Santa Barbara’s chapter of Turning Point USA — a right-wing nonprofit that works to spread conservative values at high schools and colleges — has been establishing itself on campus since the chapter’s first meeting seven months ago. 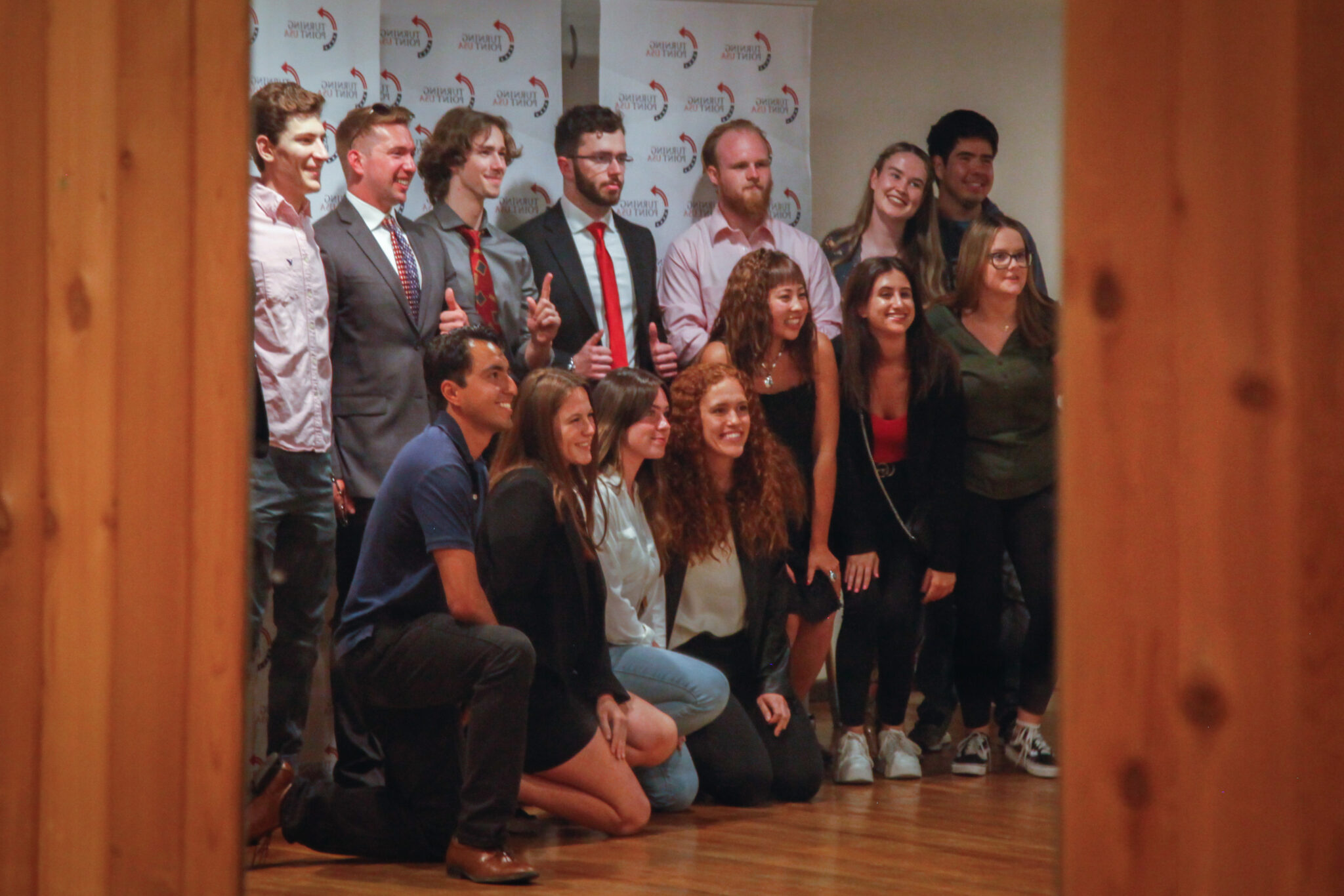 Members of TPUSA posed for a picture after their first event in April. Mark Alfred / Daily Nexus

Turning Point USA (TPUSA) at UCSB has increased its campus presence since its first meeting, protesting online learning in January and hosting conservative speakers John Doyle and Kai Schwemmer in an off-campus event in April.

Ben Corbett, a third-year history of public policy major and the president of TPUSA at UCSB, co-founded the chapter with fourth-year sociology major and TPUSA at UCSB Vice President Berkley Corey.

Corbett said the organization has been popular among conservative students due to its ability to offer a space for politically like-minded individuals to express their views, especially following the election of President Joe Biden.

“I attribute the resurgence to a combination of people needing an outlet to express themselves and [react to] Joe Biden’s America,” Corbett said.

The Bonfire Collective, a Santa Barbara-based group that “aims to cultivate [a] revolutionary political consciousness and practice,” posted on Instagram that TPUSA at UCSB and similar groups justify their agendas through a veil of defending individual liberties, aiming to inform the Santa Barbara community of the rising prominence of Turning Point at UCSB.

“All of these groups outwardly claim that they are not bigots by any means—that they are simply defending individual freedom, liberty, and enterprise against governmental tyranny,” the group said in their post. “These defenses, however, are mere crypto-fascist deceptions, designed to mask [their] truly monstrous agendas.”

Corbett said that “the chapter here was non-existent when I transferred.” There is no evidence of past UCSB Turning Point organizations on Shoreline or other campus websites, with a dormant Twitter account being the only remnant of past activity on campus.

UCSB does not supply any funding to the Turning Point chapter “as of right now,” according to Corbett, leaving the group to raise funds independently. In the weeks leading up to Valentine’s Day, chapter members sold Valentine’s Day-themed cards and candy in the Arbor.

The group had its first instance of direct protest in January, shortly after UCSB’s decision to delay returning to in-person instruction at the start of Winter Quarter 2022. Members of both the UCSB and Thousand Oaks Turning Point chapters demonstrated against the delay, taking to street corners in Isla Vista with protest signs and encouraging cars to honk for in-person instruction.

Due to its nonprofit status, Turning Point cannot endorse candidates or specific initiatives — unlike UCSB College Republicans, another conservative campus organization that is able to make endorsements and is affiliated with the national Republican Party.

In December, TPUSA at UCSB members traveled together to Phoenix, Arizona, for AmericaFest — an annual four-day event organized by the national Turning Point organization. During the trip, Corey and others posed for pictures with notable conservative figures, including TPUSA founder Charlie Kirk and former Trump administration White House Press Secretary Kayleigh McEnany.

The chapter held its first official event on April 21 at Elks Lodge Santa Barbara, where around 40 students and community members attended to hear from conservative speakers Doyle and Schwemmer. 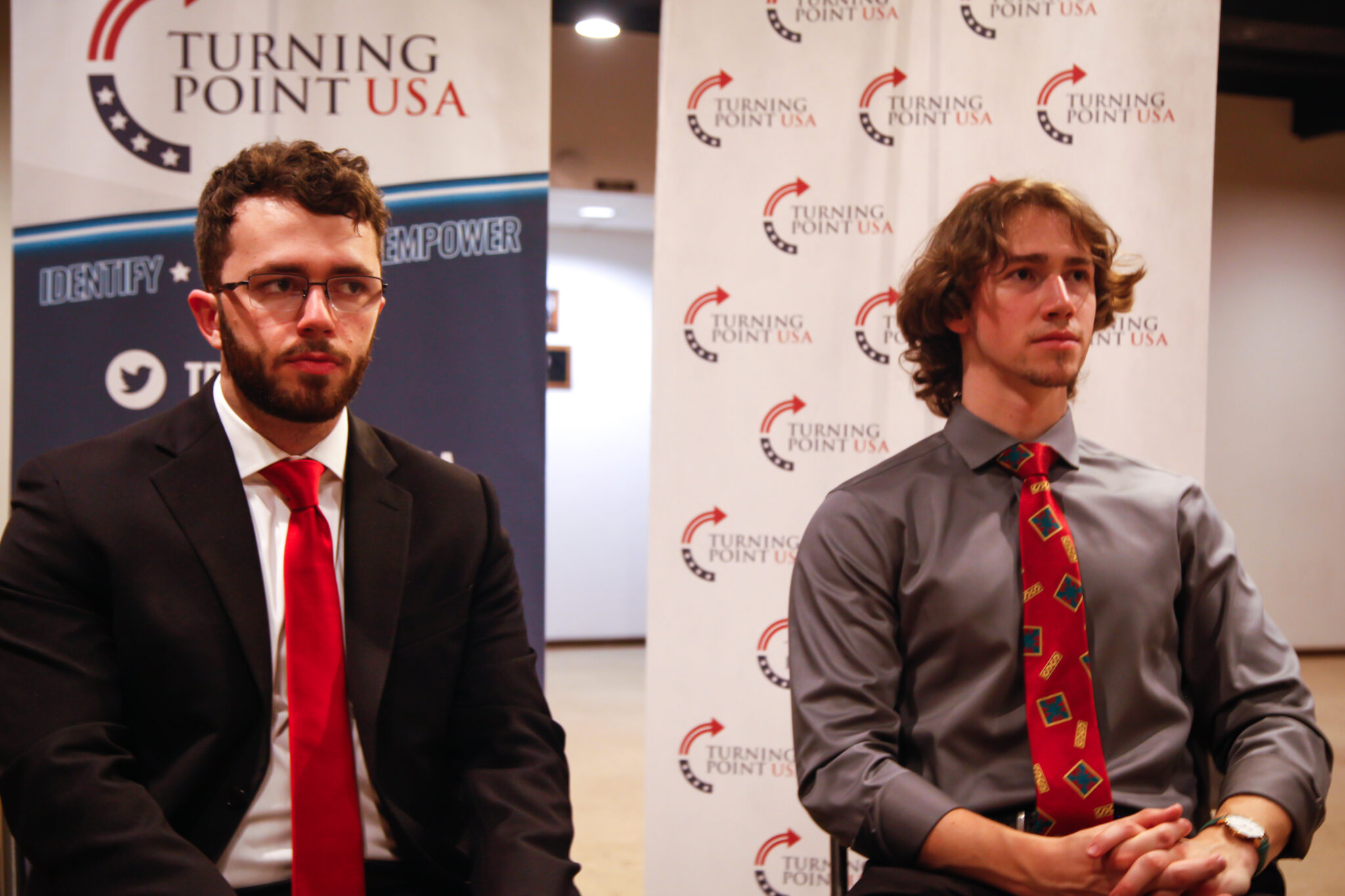 “I really appreciate the support for our chapter’s first official event,” Corbett told the crowd at the event. “I would like to think of it as true grassroots conservatism, just a couple of people getting together with a couple of ideas and putting together an event.”

The keynote speaker was Doyle, a 22-year-old conservative political commentator and host of “Heck Off, Commie!” on YouTube, a channel that has amassed over 28 million views.

Doyle spoke out against same-sex marriage and blamed immigration as well as U.S. foreign policy for what he perceives to be a decline in the “American standard of living,” particularly in California.

“If we as Americans can go out on the offensive to take our country back, to make America great again, we’re gonna have a much more beautiful place, [and] we can make California great again,” he continued.

The university made clear that it was not connected to the TPUSA at UCSB event in the days leading up to it, taking to Twitter to write that it “is not a UCSB-registered event and it is not taking place on campus.”

Doyle called the university’s act of distancing itself from the speaker event a “disgrace.”

“We are not at the university, we had to separate ourselves from the university,” he said. “I think it is a disgrace not only to the university but to the student body, and they should be ashamed of themselves.”

Corbett said that UCSB’s Twitter statement contradicted the university’s belief in supporting a diversity of viewpoints on campus.

“It definitely sends a message that the administration doesn’t really stand by its supposed belief in diversity of thought,” he said. “I’d say that the admin is not as supportive [of Turning Point] as they are of leftist groups.”

The university did not respond when asked about any alleged bias.

Turning Point hopes to continue growing its presence at UCSB as it plans for future events.

“My aspirations for the group next year are the same as they were this year, [to] provide a place for people to debate new and interesting ideas,” Corbett said.

Cameron Clark contributed to this article.