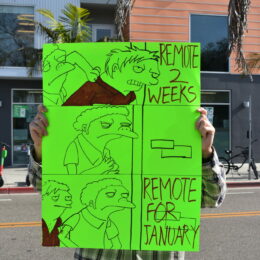 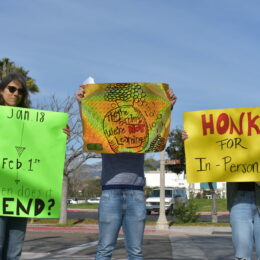 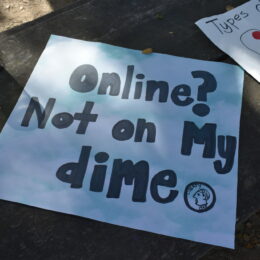 The group of students — consisting of around six people — carried signs with slogans such as “Honk! For In-Person” and “You Eat Ass but are scared of In-Person Class.”

A week after the demonstration took place, UCSB announced its intent to follow through on its plan to return to fully in person instruction beginning Jan. 31.

The protestors — affiliated with Turning Point USA (TPUSA) a national nonprofit organization that focuses on spreading conservative values to high schools and colleges — stopped at street corners to pass out flyers to pedestrians and encourage passing cars to honk in support.

The chapter also circulated a change.org petition named, “Ensure UCSB Resumes Full In-Person Learning on February 1st,” which has amassed 57 signatures as of Jan. 20. The march ended on campus, where the students arrived to pose for pictures in front of Storke Tower.

“I prefer in-person schooling, so I wanted to come out here with some friends and just make our voices heard, because I think that the people who are pro in-person haven’t really been able to get a voice,” Corbett said.

The event’s online promotion came shortly before UCSB announced that instructors would have the option to return to in-person instruction beginning Jan. 18. The group decided to continue with the march, given the uncertainty surrounding the school’s future plans with instruction.

“They say it’ll be January 18th, then it’s February 1st, who knows where that’ll lead. I just want to go back in person,” one protester, who asked to remain anonymous for privacy reasons, said.

Other protesters in attendance at the march declined to give on the record statements to the Nexus.

Corbett also expressed his frustration with UCSB placing the responsibility of choosing between remote or in-person instruction on faculty.

“I think that it kind of just shifts the blame, in my opinion, instead of [Chancellor Yang] making a decision,” Corbett said. “The student body can’t really hold teachers accountable, especially if they’re tenured. So you’re basically just screwed, in my opinion.”

The protest was first advertised on UCSB’s subreddit on Jan. 7, with a digital flyer calling on students to “Please stand with us and fight for our freedoms!” and sporting the UCSB College Republican and TPUSA at UCSB logos. The post was later taken down by the account, and a redesigned flyer was uploaded on Jan. 8 without the campus organizations’ logos. The second post was removed by the subreddit’s spam filters shortly after.

“There was a little problem with the messaging,” Corbett said. “That’s why we made the new poster because I was like, ‘Guys, why did you post that?’ We went through a couple different posters … the Gaucho one was the one that I wanted to put out. We literally made the Gaucho one and then someone posted the other one.”

Corbett noted the low turnout of the event, stating that they had ordered too much pizza and were expecting “a lot more people.” TPUSA UCSB posted photos from the event the following day, with a caption reading “We had such a great turn out at our March a couple days ago!”

Corbett said that the costs of remote instruction outweigh the benefits, despite the surge in cases nationally and locally.

“There’s a difference between cases and hospitalizations, and we haven’t really been seeing many hospitalizations,” Corbett said. “So, I still think it would be good to be in person because I think that the benefits – the mental health benefits, people get depressed when they’re online, the social benefits, meeting people on campus … I think that there is definitely a lot more at play than just cases.”

There are 150 persons hospitalized due to COVID-19 and 6,154 active cases in Santa Barbara County, according to county data as of Jan. 20.

Corbett said he did not take issue with some of the other COVID-19 related protocols implemented by the university, such as masking and vaccine requirements.

“Yeah, it’s fine, as long as we’re in person. I just want to be social. It’s really not about politics for me. I want to get the school I paid for. I’m paying so much for tuition. I’m paying for all these campus resources, the rec centers are closed. I disagree with that. I think that we should still be able to use it,” Corbett said. “There’s not even that much to do [at the rec cen] outside. It’s only like two or three benches.”

The Recreation Center announced on Dec. 31 that all indoor activities would be put on hold for two weeks due to the shift to online instruction, a move that has been extended through Jan. 30.

Although the protest was announced and advertised by the right-wing groups College Republicans and UCSB’s TPUSA chapter, and was held in partnership with TPUSA Thousand Oaks, Corbett maintained that the rally is not intended to be political.

“This is bipartisan. This is just a bunch of people who are out here protesting. I mean, some people can maybe be members of clubs, but today we don’t care about Republican or Democrat. We’re just out here trying to fight for everyone, because I know a lot of people want to be in person,” Corbett said.