The Daily Nexus
News
UCSB Student Involved in Auto-Pedestrian Collision in Goleta
May 5, 2022 at 2:25 pm by Nisha Malley and Asumi Shuda

A collision between a vehicle driven by a UC Santa Barbara student and a pedestrian occured today at the intersection of El Colegio and Camino Del Sur, California Highway Patrol Officer Dave Nees said. 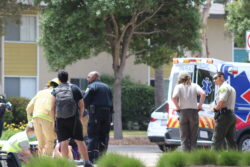 The individual was later carried from the scene on a stretcher by paramedics. Courtesy of Liam Goodin

The accident happened at approximately 12:30 p.m., when the car driver took an unprotected left turn onto El Colegio and hit a pedestrian who was crossing the crosswalk, according to Nees. The collision occurred outside Santa Ynez Apartments — one of UCSB’s university apartments.

The pedestrian hit their head and may have sustained further injuries, Nees said. The individual was later carried from the scene on a stretcher by paramedics.

Nees also confirmed the driver to be a UCSB student.