The Nexus has compiled profiles of our current Associated Students elected officials to reflect on their past year in office. As they look back on their campaign platforms, we asked our elected officials to tell us about their successes and shortfalls throughout their terms in office. The term in reviews for the other executives — President, EVPSA and EVPLA  —  can be viewed at dailynexus.com. Internal Vice President Bee Schaefer was not available for a term in review interview.

External Vice President for Statewide Affairs Esmeralda Quintero-Cubillan served with an extremely impactful and productive commitment to the student body’s needs during their 2021-22 term. 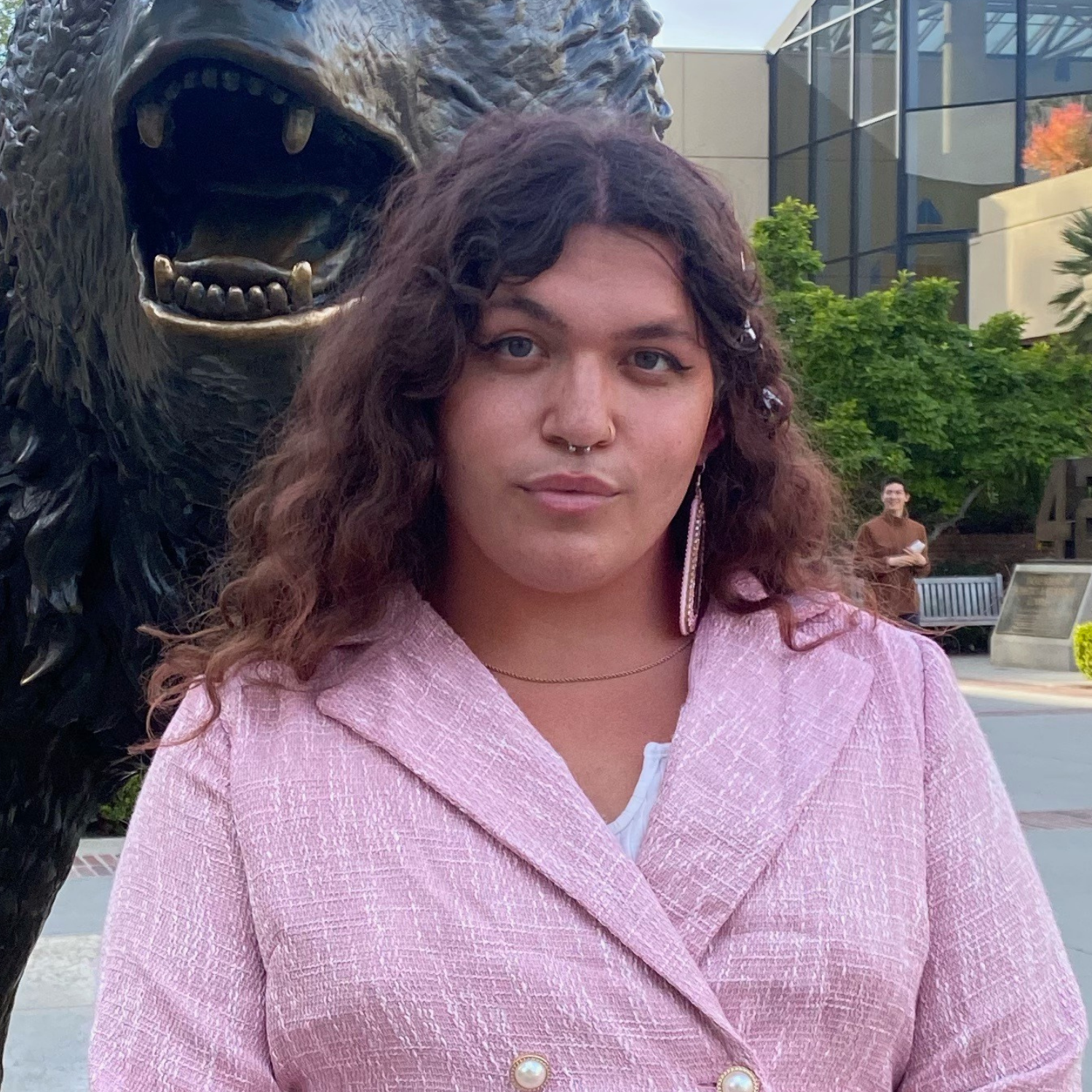 Quintero-Cubillan worked to fulfill another platform point — implementing a safe return to in-person instruction — amidst a lack of planning on the university administration’s part, they said. Courtesy of Esmeralda Quintero-Cubillan

Fifth-year sociology major Quintero-Cubillan — who simultaneously served as University of California Student Association (UCSA) president during their tenure — went above and beyond in their duties as External Vice President for Statewide Affairs (EVPSA) and UCSA president to advocate for all students, specifically the UC’s marginalized communities, through lobbying at the legislative, administrative and student body levels.

They worked on a campaign to double the Pell Grant — the largest federal grant for students at public universities across the nation — that would increase the maximum grant by over $2,000. Additionally, they advocated for a $6 million increase for foster youth in the UC system in the preliminary California state budget. Both policy initiatives have been included in the proposed upcoming federal and state budgets, respectively.

Quintero-Cubillan’s identity as a marginalized person in an institution “not built for me” was consistently at the forefront of their advocacy efforts both as EVPSA and as UCSA president.

“We’re still fighting to secure other money to support our communities, but the reason we have that $6 million is because I’m a former foster youth who went to UCSA and I demanded that it be included in our portfolio,” Quintero-Cubillan said. “We went to the governor’s office and the governor’s office included [that] in their initial draft of the state budget.”

They also worked to find “legislative champions” for a variety of progressive, advocacy-based bills, including AB 367 — a menstrual equity bill that would provide menstrual products free of charge in all California public learning institutions. Quintero-Cubillan also advocated for SB 118 — which changes how a California environmental law applies to colleges and saved UC Berkeley from cutting nearly 400 admitted students — among a plethora of others.

“There [are] so many things that we did legislatively, there are actual, tangible policy things that changed,” Quintero-Cubillan said, reflecting on their wish that more students were aware of the advances their office made.

Quintero-Cubillan originally ran for EVPSA on a platform of combating tuition hikes, tackling basic needs such as housing and food insecurity, ushering a safe transition back to in-person instruction and advocating for environmental ethics and responsibility.

The UC Regents did vote to approve a multiyear tuition raise last July despite Quintero-Cubillan mobilizing students across the UC to protest the raise. However, their EVPSA and UCSA offices were able to implement several student-serving compromises to the original plan, including a five-year reaffirmation vote and an increased return to aid within tuition.

“We were able to insert a five-year reaffirmation vote, meaning rather than being a never ending tuition raise, we could at least put a stop gap measure to protect students,” they said.

“We increased the amount of revenue that would be used in something called returns to aid. Return to aid is money taken out of tuition dollars and redistributed out through scholarships and other financial aid forms. That, I think, was a massive victory,” they said.

Quintero-Cubillan worked to fulfill another platform point — implementing a safe return to in-person instruction — amidst a lack of planning on the university administration’s part, they said.

“But when we fought for it, we were able to get COVID restrictions that were not nearly enough but were at least something to protect students. I think that was a policy win,” Quintero-Cubillan continued.

During their term, Quintero-Cubillan also advocated on behalf of the student body directly to university administration on issues like the controversial Munger Hall dorm design.

After touring the original Munger Hall mock-up alongside other UCSB student executives, Quintero-Cubillan went to the UC Regents and UC President Michael V. Drake to inform them of the mental health crisis Munger Hall posed to students.

“I said, ‘You need to stop this. This is a mental health crisis waiting, this is insane, this is undeserving of the UC,’” Quintero-Cubillan said.

Quintero-Cubillan’s work also purposefully prioritized providing direct aid to marginalized communities. In their capacity both as EVPSA and UCSA president, they have redistributed funding to a variety of identity-based organizations.

“I’m in a place of institutional power. I am in a place of having great influence, and I’m in a position in which I’ve never occupied before,” they said. “How do I, as someone who considers myself radical, who considers myself a leftist and anti-capitalist, going to distribute these funds in ways that I think are meaningful, important and help sustain the community on campus?”

“At the end of the day, it’s not my job to do that work on campus. I am solely an external representative,” Quintero-Cubillan continued. “I represent us outside of the realm of our campus. But because I have that privilege, I see it as my job to redistribute institutional funds.”

Presently, they have given over $55,000 cumulatively to student groups, including UCSB’s Nikkei Student Union and Black Student Union, as well as a variety of cultural groups’ graduation ceremonies.

“I fought tooth and nail to get [to UCSB],” Quintero-Cubillan said of their experience as a transfer student. “When I got here, people actually took a chance on me, and I cannot see any way that I leave this position without giving back to these communities. And this is the way that I can give it back to them.”

As UCSA president — which Quintero-Cubillan acknowledged was at times a traumatizing and difficult role, and one where they often dealt with transmisogyny — they worked to bolster the advocacy framework of the organization and support organizing campaigns that uplift marginalized students.

“I’ve always seen two of the most important campaigns being Racial Justice NOW! and Acquire, aka the two campaigns that have the most involvement from students of color and other marginalized identities,” they said. “That was me as president, emphasizing the importance of these campaigns, and something that I’m still working on.”

Quintero-Cubillan is also working to achieve one of their platform points — advocating for environmental ethics and responsibility — as UCSA president by establishing a fifth permanent UCSA campaign for environmental justice.

The goal of the proposed campaign will be “to start a new chapter of us as UC students actively fighting climate change in an institutional framework through the Board of Regents advocacy, through advocacy with [the UC Office of the President] and with advocacy of the entire broader UC network,” they said.

During their tenure as president, they also successfully obtained retroactive pay for UCSA employees who did not receive compensation for their work and worked alongside Student Regent Alexis Atsilvsgi Zaragoza to implement the UC Native American Opportunity Plan — which provides free UC tuition to California members of federally recognized indigenous tribes.

Quintero-Cubillan spoke emotionally to what they felt was one of their “biggest blows” while in office: not being able to stop the creation of the controversial Thirty Meter Telescope (TMT), which is slated to be built on the sacred Native Hawaiian land Mauna Kea, during a meeting with UC President Drake.

TMT is continuing to move forward with the project, as the UC continues to annually invest in the endeavor and is currently seeking federal funding for the project.

“I thought going into that meeting, if anyone could persuade him, it would be me because I spent the last two years learning how to talk to people. Learning how to talk in a way that makes people care about what I have to say. And it still wasn’t enough, and I felt like I failed my promise to my own community,” Quintero-Cubillan continued.

They also said that they wished they had communicated more clearly with the student body the various legislative wins and direct advocacy that were achieved during their tenure.

“I wish I was more public in the ways that we won and the ways that we fought for people,” Quintero-Cubillan said. “I wish I had done more in efforts that broadcast how representative our office is and how we actually serve you.”

Quintero-Cubillan believes that successor Marvia Cunanan, who currently serves as the EVPSA office’s campus organizing director, will bring a similar lens of empathy and empowerment to marginalized communities on campus, with a specific focus on disability justice.

“Marvia is the future,” they said. “I think she was honest in a way that improved the way that I ran [the office], and she will still embody the ideals of equity, care and justice.”

Throughout their time in office, a passion for empowering and advocating for marginalized communities from a place of empathy and lived experience remained the clear center of Quintero-Cubillan’s work, from the structure and mission of the EVPSA office — which they reformed to ensure safety and wellbeing for the majority QTBIPOC staff — to the time they spent advocating for individual marginalized students who reached out for their help.

“What keeps me going and what empowers me is thinking of how the ancestors fought for me to be here and how I was a direct product of their resilience, their care and their love, that has always sustained me,” Quintero-Cubillan said.

“It is so important to me that marginalized students on this campus see someone like me, see someone like them, fighting for them and understand, fundamentally, I am here for them. I’m here because they took a chance on me, and I will return everything back to them.”

A version of this article appeared on p. 4 of the May 5 print edition of the Daily Nexus.