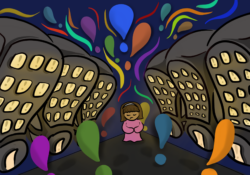 Recently, my friends sat me down for a quasi-intervention, letting me know I am a “Scary Texter.” There was a lot to unpack. I’ve distilled my thought process into the following list:

Upon reflecting on our group chat, there was one glaring disparity between the other girls and me: Rarely did I use the exclamation point. Instead of texting, “Here!!!’’ when I was at their dorm, I simply said, “here.”

The exclamation point’s overuse has been a hot subject of conversation, as women — most often in corporate and academic settings — feel obligated to overuse the punctuation to avoid coming off as “a bitch” in workplace communication. In reality, this label is given to any woman who is assertive and unapologetic (essentially someone who communicates in the same way a man does). Yet, instead of this language being the standard, women are expected to accept a subordinate role to men and accommodate their language as if their existence is an inconvenience. The corporate exclamation point is less of an indicator of personality and more of a survival tactic in the contemporary professional world.

A man is allowed to state:

“Your report is late. Please get it in as soon as possible.”

“Sorry for bothering you!! Just a gentle reminder, your report was due last night, so please get that turned in when you get the chance!”

While this may seem ridiculous, it is what women must do to avoid stepping on the toes of men.  I am not here to slam the use of this survival skill, as I, too, utilize it. Although I wish it weren’t necessary, nearly every woman who has ever sent an email knows that a couple of exclamation points ought to be thrown in there, even if you’re nowhere near an exclamation point kind of mood.

Speech being modified according to gender is not a concept unique to the digital age. Most obviously, men and women are expected to speak in different tones; yet, the differences extend beyond the biological. When speaking, women often use more vocal fry and have upticks at the end of their sentences. The general trend of women’s speech is to forfeit oneself to powerless language to avoid coming across as rude or too masculine. The exclamation point serves as the digital adaptation of these speech modifiers.

All this being said, what I find most concerning is this mentality seeping into the social fabric of familiar communication. Coming across in the right way in texts is difficult, and the leap to overusing exclamation points is only natural. Yet, I argue that these socially inflicted tonal modifiers need to be stopped before we reach a point of no return. Using exclamation points is not inherently wrong but becomes dangerous when used with a sense of obligation as opposed to honesty. Women should be allowed to communicate their truth without having to provide a buffer to their actual feelings. Each falsely optimistic exclamation point cements the standard that this is the expectation of women not only for professional settings but for familiar ones, too.

As women, we are playing into, and setting, the unnatural idea that only a very narrow range of emotion is allowed in communication, even among ourselves. When texting my closest friends, I feel pressure to coat my texts in a layer of enthusiasm that is far more excessive than what the scenario calls for. If women are only able to communicate with each other with an overly cheerful tone, we are locking the door and throwing away the key: We will never be able to achieve the freedom of men’s communication, forever confining us to a life of “Thank you so much!!!” instead of “thank you” to avoid the doomed fate of being labeled a “bitch.”

Without giving ourselves the freedom to express our feelings (good and bad), we undermine what makes us living beings.

Without giving ourselves the freedom to express our feelings (good and bad), we undermine what makes us living beings. Someone who seems to be constantly happy and excited is either a robot or, more likely, dishonest. Forcing women to communicate only within this narrow range of expression confines us to a life of being docile and dominated — leaving us with a terrifying lack of agency. It is not worth betraying our emotions to avoid stepping on the toes of those too fragile to accept that women can be more than rays of sunshine all of the time.

When women are worried about how they come across in text, especially to their other female friends, it is a signal that time is running out: This sexist ideology has colonized the digital frontier of women’s communication, with nowhere to go but to turn inward. If this seed takes hold within women, we will be unable to be expressive, leaving us in a void where any negative or neutral emotion is inarticulable.

The problem is not the exclamation point itself; everyone should be allowed to communicate in whatever way they need to accurately express themselves. If that means using exclamation points because you really are that happy, go for it. If it means ending a sentence with a period because it doesn’t deserve more than that, by all means, go ahead. Women deserve the freedom to communicate in whatever way they deem fit without sacrificing their integrity and respect.

So, I want to say “sounds good” and not have people question why I didn’t tack on 12 exclamation points because maybe I just meant that it sounded good and nothing more. I don’t want to be scary; I want to be honest and accurate and let my use of five exclamation points mean that I really am that excited about something. So no, I am not mad at you just because I didn’t dress up my text with a smiley face, an “LOL” or a goddamn exclamation point!

Talia Smith thinks that women should be allowed the language to communicate their full range of emotions (and that the decision to not use exclamation points should not be a judgment of character).

J*wish woman imagining oppression and not being able to talk how she feels like: nothing new.