The Daily Nexus
Student Gov
Associated Students elections are broken. Eliminating parties will only make it worse.
April 28, 2022 at 4:31 pm by Daily Nexus Editorial Board

UC Santa Barbara’s Associated Students is the largest nonprofit organization in Santa Barbara County, boasting a budget of $13,689,460.91 for the 2021-22 school year. UCSB’s student fees are the highest of any UC campus.

But even with millions at its disposal, Associated Students (A.S.) can’t get students out to vote. 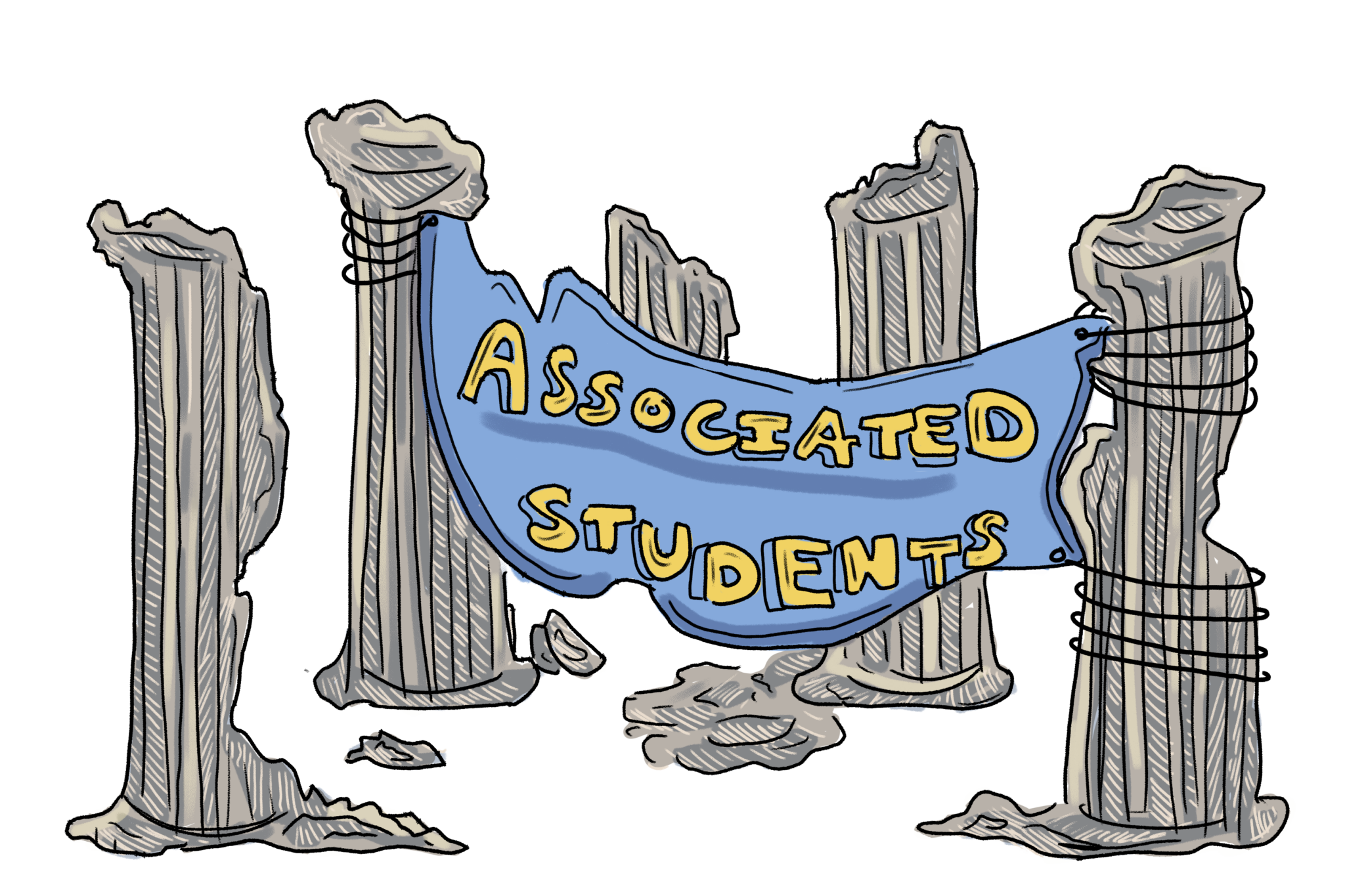 Voting occured last week in the A.S. Spring Election. According to A.S. Legal Code, 20% of the student body must vote for results to be valid. For the first time in memory, the threshold wasn’t met by its original deadline, forcing A.S. to extend elections through the weekend. After the extension, the threshold was met by just a .76% margin.

Marisela Marquez, the A.S. executive director, said in a statement to the Nexus that as far as she knows, this was the first time in recent history that the voting period needed to be extended during a regular spring election.

Not only did fewer students vote, but fewer students ran for office. The A.S. Senate is comprised of 27 seats, and only 20 students ran, leaving seven openings in the start of the term. 18 of those candidates were affiliated with Storke Party — the only party to run a senate slate — and the other two ran independently.

Compare that to the 2021 election cycle, where 31 students ran for Senate positions , or 48 in the 2020 election. In just two years, the number of students running for senator has dropped by half.

As one of the few student bodies that regularly covers A.S., the Nexus acts as the campus’s free press to ensure accountability with all our local governing bodies, A.S. included.

This year’s historically low election turnout makes it clear: Associated Students is failing to connect with the student body.

Our knowledge of the work completed by A.S. — and, in particular, the A.S. Senate — gives us an obligation to echo the criticisms many students have made approaching election season.

The Nexus believes this year’s Senate’s palpable inaction was seen both in a lack of effort to combat the intrinsically insular nature of the Senate and in a lack of tangible, completed work to benefit students. Both of these factors played a large role in the lack of awareness UCSB students had at large around A.S. functions and, in turn, A.S. elections.

This year, the 72nd Senate produced 48 pieces of legislation, and four senators resigned midway into their tenure.

Compare that to the 2020-21 school year, where senators produced a total of 114 pieces of legislation and 94 in the 2019-20 school year. A completely remote Senate working during a remote school year managed to be more productive than this year’s senators.

This year’s dissolution of the party system without a tangible solution to increase voter engagement is one example of an A.S. that is failing to prioritize student representation.

During Winter Quarter 2022, the Senate — with the support of many other actors within A.S. — unanimously voted to pass an amendment to the A.S. constitution named the Nonpartisan Act that would ban senatorial and Internal Vice President candidates from running with political parties. The bill was sponsored by Gurleen Pabla, incoming A.S. President for the 2022-23 school year, among others.

The Nexus has witnessed firsthand the divisive, petty and oftentimes cruel nature of UCSB’s party system, and agree with the bill’s sentiment that parties have fostered an unsustainable and toxic environment within the association. Parties have also traditionally fostered groupthink and loyalty along partisan lines that does not benefit democratic and independent thought.

If our student body was engaged and interested in A.S. and student politics, and willing to put in the time and effort that researching independent candidates would take, dissolving parties could provide a solution to the plethora of issues they have created internally.

However, moving forward with this decision without having a plan to reinstate the benefits that parties provide in terms of voter engagement— 79.3% of the undergraduate student population did not vote this year — ultimately feels like an internal solution to an external problem.

Although the amendment — which was also passed by the student body on the spring elections ballot — will go into effect next year and onward, parties took internal steps to dissolve during this year’s elections.

This was in hope of dissolving the partisan, divisive relationships that plagued their Senate and past Senates, 2021-22 Senator and student sponsor of the bill Jessy Gonzalez told the Nexus in April. But at the same time, Gonzalez told the Nexus he saw “somewhat of a correlation” between the dissolution of parties and low voter turnout.

Schools all across the UC, including UC Davis and UC Riverside, saw a sharp decline in voter turnout after abolishing the party system.

Shannon Hollingsworth, chair of the A.S. Elections Board, said in a statement to the Nexus that these campuses warned UCSB against the decision to abolish parties, fearing that our A.S. would befall a similar fate.

It’s true that the divisive nature of political parties might have made running with them less encouraging. But based on this year’s results, abolishing parties lowers candidate and voter turnout.

As a governing body, the Senate’s priority is representing its constituents, both with legislation and with diversity of opinion and representation. If A.S. cannot incentivize people of all backgrounds and beliefs to run for elected office, they are failing. This is abundantly clear when looking at the lack of candidates who ran to represent the student body for the upcoming year.

Incoming senators were not voted in above the competition but elected in de facto due to a lack of competition. They do not accurately represent the diversity of UCSB’s student body, and their ideas and opinions, as detailed in questionnaires posted by the Daily Nexus, are largely similar to one another’s.

While the Nexus acknowledges that the party system is deeply flawed, it historically provided a space for a broader variety of potential candidates to receive the institutional support and knowledge that is oftentimes integral to running a Senate campaign.

These spaces can also provide a safe space for students of marginalized backgrounds to run a campaign in the face of racism, sexism and general bigotry that so often accompanies spring elections. And parties are beneficial from an awareness perspective alone: parties are many students’ first introduction to the Associated Students and to student candidates each spring.

We’ve seen firsthand this year that working to abolish the party system in the face of an already apathetic student body led to less candidates, less voting and thus less engagement of the student body with Associated Students. Next year, senatorial candidates will all be running independently.

The abolition of parties also places much of the responsibility to recruit candidates and advertise voting to the A.S. Elections Board, a traditionally internal entity that has served as a liaison between party heads and elections logistics.

The Nexus would like to acknowledge that the Elections Board did attempt to educate A.S. personnel on the issues with party abolishment and were acting on a highly popular sentiment within A.S. by facilitating the dissolution.

This year’s low voter turnout and number of candidates, however, shows that the Elections Board is not enough to fill the void left by parties who do that engagement work.

Last Thursday, the Elections Board announced in compliance with Article X, Section 2 of the Elections Code of the Associated Students — “general elections shall be completed by the fifth (5th) week of the Spring quarter” — they would be extending elections until Sunday night in an attempt to meet the 20% voter threshold.

Although the Elections Board was within their rights to pursue such an extension, the continual changes they were forced to make to meet voter threshold were undoubtedly frustrating for candidates and confusing for students.

Overall, the Elections Board appeared unqualified to handle the changes that came from the decision to abolish parties and the larger issues that have created voter apathy at UCSB, acting only on the precedent of the remote elections that came before them instead of initiating new and sorely needed change required to reignite student engagement.

Students on the UCSB campus are owed efficiency, outreach and transparency from the Senate and the Elections Board— three things that the Nexus did not see from them this year. We hope that the incoming senators acknowledge the shortcomings of their predecessors and work to remedy their deficiencies for a 73rd Senate that is truly invested in being a representative and democratic body.

But without a system — parties or otherwise — that recruit candidates and get students out to vote, we as an Editorial Board are uncertain that Associated Students can fully serve our student body.

This article appeared on pg. 1 of the April 28 print edition of the Daily Nexus

We need political parties because it easily tells students how far left candidates are. OPP, CU, and Storke Party were winners because they are moderates.

AS Progressives know this. Most students are turned off by the far leftists only concerned about AS elections as a platform for BDS and to overload student fees for their virtue signaling POC funds. If you get rid of parties, AS admin knows they can push their progressive spend-happy candidates through.