The UC Santa Barbara men’s lacrosse club finished out the regular season on Saturday, with a hard-fought 10-15 loss against its rival Cal Poly Mustangs. 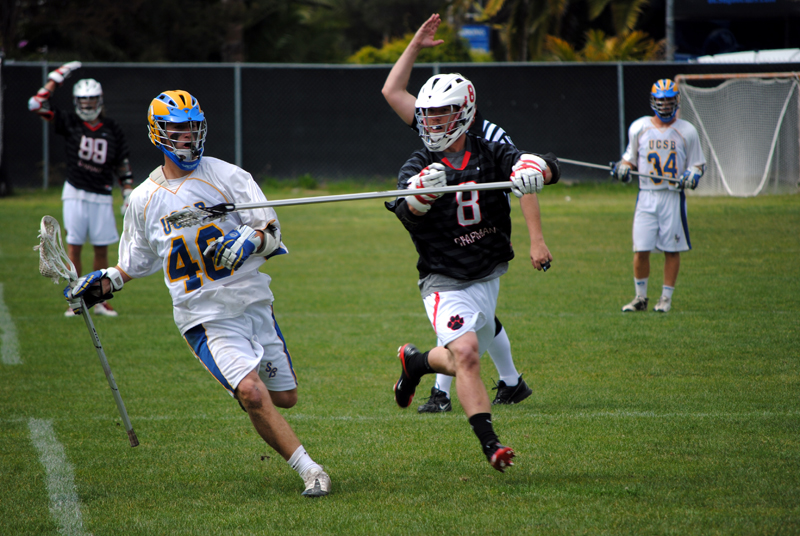 UCSB’s northern rivals had the jump on the Gauchos early, scoring 5 goals in the first quarter and 9 through the first half for a score of 9-4 at the break. An even second half resulted in the Gaucho’s first division loss of the season. As both UCSB and Cal Poly were heading into this game 2-0, its stakes were high.

A win on Saturday meant first place in the Western Collegiate Lacrosse League (WSLL) Southern Division, but unfortunately the Gauchos could not get the job done. Despite this, there were good signs for the games to come, as UCSB was able to win the ground ball battle against Cal Poly 47-42 and freshman goalkeeper Kevin Shvodian  turned in a solid outing with a save percentage of 51.6%.

Injury troubles have weakened the UCSB roster, particularly the defense. Freshman Zen Chang and senior Alex Gregory, two strong defenders, have been forced to miss time. Sophomore midfielder Patrick Gough noted that these injuries have taken a toll on the team, including against Cal Poly.

“It’s been difficult with injuries, with our defense especially being hit hard, but we have had some great players step up in positions they had never played before to make up [for it],” Gough said. “It’s been hard getting used to having some of our key starters missing.”

Despite the losses to their roster, as well as to Cal Poly, the Gauchos secured second place in the division, giving them a berth in the WSLL Division I tournament. Their first game will be against the University of Nevada, Reno (UNR) on Saturday, April 23, and optimism is running high.

“The main goal is to win it all and advance to the national championship … when we have all our cylinders firing and everything coming together, there isn’t a single team in the MCLA that we can’t beat,” Gough said.

The WSLL tournament consists of three rounds; if the Gauchos can handle UNR, they will play University of California, Berkeley, who they narrowly lost to in their season opener, 14-16. If the Gauchos can even the score there, they play the winner of Cal Poly vs. Santa Clara University/Dominican University in the WSLL finals. A win there will secure a trip to the national tournament held in Round Rock, Texas.