The No. 6-ranked UC Santa Barbara men’s volleyball team just wrapped up their regular season with a dominant 3-1 road victory over the No. 9-ranked UC San Diego team. After winning the 1st set by 4 points, the Gauchos dropped the 2nd set before taking the next 2 sets and winning the match. 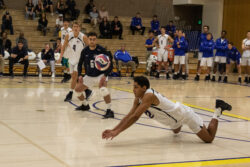 In the match, there were a plethora of standout performers both offensively and defensively. On the offensive side, sophomore outside hitter Dayne Chalmers and junior outside hitter Ryan Wilcox led the way for the Gauchos, each getting 13 kills in the match. On defense, the Gauchos were led in the block department by sophomore middle blocker Donovan Todorov, who led the team with 8 blocks. With an overall standout game, junior opposite hitter Haotian Xia provided the team with 9 kills and 5 blocks.

By the numbers, Hawai’i put up a dominant shortened season during their 2021 run to their first-place finish. They finished their season 17-1, going a whopping 10-0 in league play. UCSB, on the other hand, is 6-4 in league play, but still has an impressive 18-8 overall record, hence being ranked No. 6 in the country.

In the 26 matches for UCSB, they have put up some impressive numbers, averaging 11.91 kills per set, a .297 hitting percentage and 11.26 assists per set. The Hawai’i team that won it all in 2021 averaged 13.7 kills per set, 12.6 assists per set and had a .360 hitting percentage. Although the Gauchos have less in the stats department, it can be attributed to their longer schedule and level of competition in the Big West this season. Among their competitors included the talented Long Beach State team; defending national champion Hawai’i; and UC San Diego, who is ranked in the top 10 in the country.

Although the core for the Gauchos remained the same for them, the result against Hawai’i this season was no different than 2021, with Hawai’i beating the Gauchos 3-0 and 3-2 in conference play this season.

In the closer 3-2 conference game against Hawai’i, the Gauchos had multiple areas where a subtle adjustment could’ve been the difference. First of all, the kill percentage was in favor of the opponent with a .387 percentage, with the Gauchos being .315. On the defensive side, the most standout statistic was that the 8 blocks of the Gauchos were doubled by Hawai’i getting 16 blocks in the match.

With the Big West tournament on the horizon, it is important the Gauchos stay on the same path with minor adjustments because their games against Hawai’i show they can compete with the best in the country.