The Daily Nexus
News
Community, Reflection and a Shared Meal: UCSB’s Jewish Community on Celebrating Passover
April 22, 2022 at 11:00 am by Asumi Shuda

As the Jewish holiday of Passover continues through this week, UC Santa Barbara students spoke to the Nexus about how they observe the holiday and reflected on the significance behind its celebration. 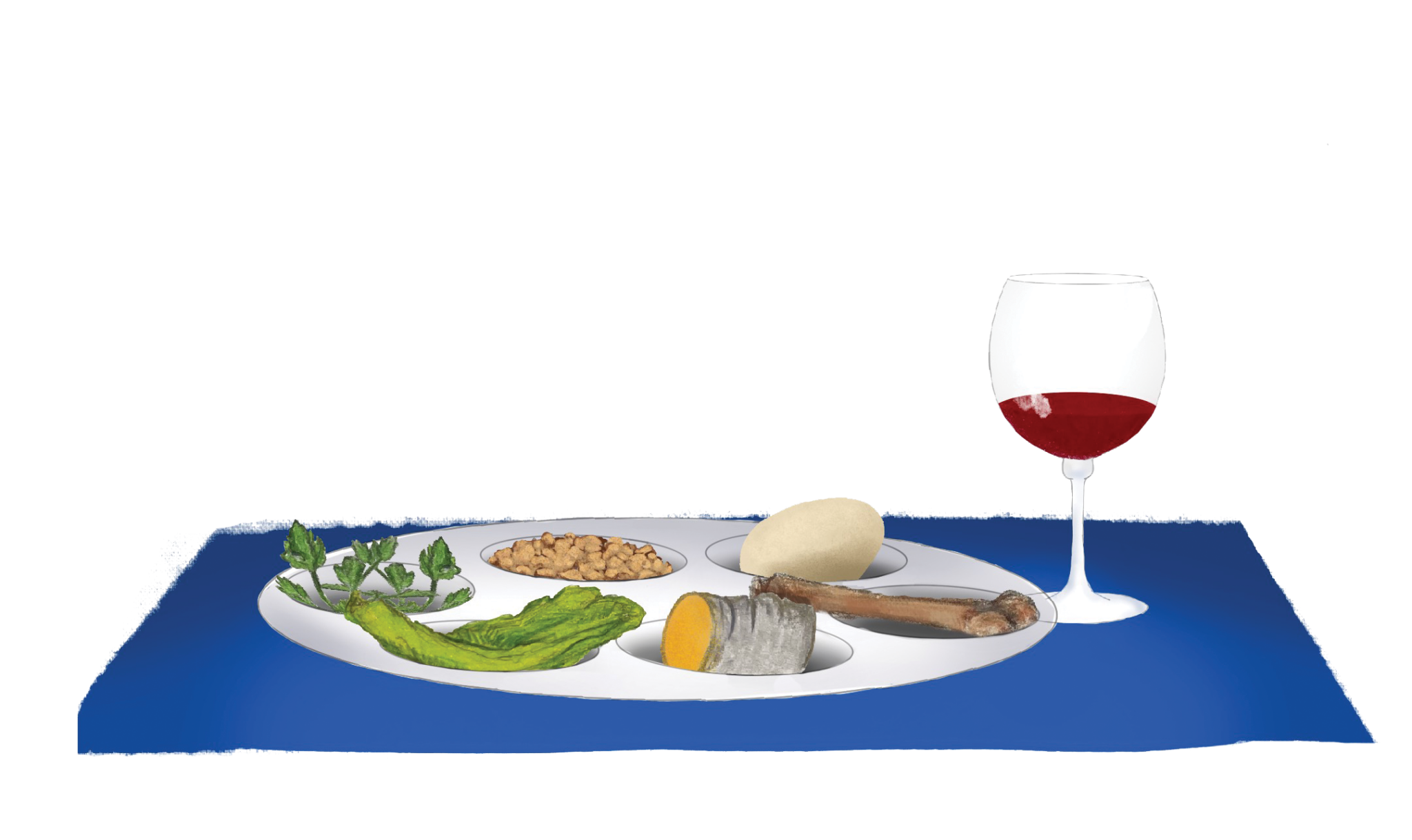 The holiday is observed through a variety of food restrictions as well as special meals and different prayers, recitations and activities. Kaitlyn Smith / Daily Nexus

Passover is a weeklong holiday beginning on April 15 and ending on April 23 that commemorates the exodus of Hebrews from slavery in Egypt in 13th century B.C.E. The holiday is observed through a variety of food restrictions — including not eating anything leavened, foods risen by yeast or any other leavening agent — as well as special meals, known as seders, and different prayers, recitations and activities.

First-year computer science major Immanuel Bareket, who practices Orthodox Judaism, emphasized the differences in Passover celebrations depending on the sect of Judaism and individual practices.

“Different Jews celebrate [Passover] differently,” Bareket said. “This year, the Iranian Jewish Student Association had a seder that was Persian style. They were teaching everybody Persian Jewish traditions, and it was really different from what I was used to, and I thought that was really cool.”

Second-year dance and philosophy double major Ashira Bloom spoke to the extensive process of preparation for Passover in her home as someone who practices modern Orthodox Judaism.

“It takes so long to prepare for Passover,” Bloom said. “You have to spend so much [time] cleaning. You clean out the entire house, and your mom makes you do so much work. You have to switch out all your silverware, you have to get rid of all of your food that isn’t kosher.”

Upon the completion of these preparations are a series of family gatherings over seders — a special meal that commences the celebration on the first night and can also be eaten on the second night of Passover — which makes up the core of Passover, according to second-year physics major Samuel Kresch who practices Reform Judaism.

“The entire ceremony is actually done over a meal,” Kresch said. “It’s entirely done within the home, and it’s a multicourse meal, and each of the courses has symbolism associated with it. You eat a course, you tell a story explaining its symbolism and then move on.”

“The standard plate is made up of eggs, matzah, horseradish, vinegar, onion, maybe sweet lettuce,” he continued.

Bareket, who was born and raised in Israel, recalled the contrast between celebrating Passover back home and celebrating the holiday in the United States.

“I was born in Israel, so when I was young, celebrating [Passover] there … the whole country is celebrating the same holiday,” Bareket said. “So in the U.S., it’s a lot different because the Jewish community is celebrating and everyone else is just watching.”

Bareket elaborated on the precise rituals that accompany seders, explaining the symbolism behind every step.

Bloom highlighted the significance of the consumption of matzah — or unleavened bread — during Passover because it is forbidden to eat leavened bread during this holiday.

“The main restriction is that you can’t eat leavened bread, and the reason why is because when we were leaving Egypt, there wasn’t enough time for our bread to rise,” Bloom said. “You also don’t get anything unless it’s marked specifically for being kosher for Passover … because this whole idea of purity comes from trying so deeply to attempt to recreate this event.”

Bloom observed Passover at home this year, flying back to celebrate the holiday with their family. For Kresch and Bareket, however, Passover was observed at UCSB and in Isla Vista. To still celebrate Passover with the Jewish community here, Kresch and Bareket both attended the Iranian Jewish Student Association’s seders in alignment with Persian Passover.

“One of the seders I went to was a Persian seder, and they had a tradition that I wasn’t familiar with before, but it was pretty interesting,” Kresch said.

“With the Persian Passover, everyone started whipping each other with green onion stalks and running around, and there’s this part of it called the Dayenu, which translates to suffering, and it’s recounting when the Jews were slaves in Egypt,” he continued.

Bareket is utilizing other resources on campus in order to stick with the diet of Passover. For instance, he spoke of getting a meal plan from Chabad at UCSB, which acts as a hub for Jewish students at UCSB and Santa Barbara City College and serves kosher Shabbat and holiday meals for students.

“[Chabad at UCSB] has meal plans that are kosher for Passover,” Bareket said. “The synagogue itself is making meals for people, and you pay them, and it’s just like a meal plan.”

Reflecting on how the university accommodates Jewish students who observe Passover, Bareket said it would be unrealistic to expect UCSB to fully accommodate students who celebrate the holiday and, specifically, follow the dietary restrictions.

“I feel like it’s unrealistic for the university to provide all these food options because they would have to follow crazy strict rules, like the entire kitchen will have to be completely clean,” Bareket said.

Kresch expressed a similar sentiment but said the university could create some accommodation for Jewish students who observe Passover during the holiday.

“I think, as a minority religion, it does make sense that we don’t take any school holidays for Passover,” Kresch said. “But I would appreciate it, and I’m sure a lot of other Jewish students would as well, if [there was] some sort of school recognition of it.”

Bloom added that there are generational differences in celebrating Passover, and those differences are clear even while sitting at the table for seder.

“I think that Jews are really familiar with generational trauma, and someone who’s a Holocaust survivor experiences Passover very differently than I do,” Bloom said. “You get to the Passover table, and there’ll be three or four generations of people at the table, and everyone experiences it differently. As the saying goes, ‘Two Jews, three opinions.’”

Above all, Bloom said that the essence of Passover is reflecting on the reason behind the holiday existing in the first place.

“This is a story that’s over 5,000 years old, and the commentaries in [the Haggadah] are thousands of years old, and they have been perfectly preserved,” Bloom said. “The entire essence of the holiday is that we’re retelling the story, and being free from slavery in Egypt is the first thing that happens, and there’s a bunch of events that happen right after that lead to us getting the Torah.”

“Jews have been exiled from somewhere in every century in multiple places, so it’s very valuable in trying to remember the reason why we have the story of escaping Egypt because it leads us to everything that happens next,” they continued.

Bareket said gathering with family and the Jewish community during the holiday offers important avenues for reflection on the meaning of freedom as a Jewish individual.

“Honestly, getting together with the Jewish community and celebrating [Passover is important],” Bareket said. “We remind ourselves that we’re lucky to be free and being in the situation that we are in because in the past, we can’t forget that we were an oppressed people for thousands of years.”

Similarly, Kresch said that the observation of Passover serves as a critical reminder of the historical oppression of Jewish people throughout the centuries.

“The most important thing is not any of the rituals, but actually just remembering the philosophy of it and why [Passover] is a holiday,” Kresch said. “It’s a reminder that Jews, in a lot of societies over time, have been treated as second-class citizens and treated unfairly.”

“It’s lamenting that pain … but also celebrating strength and perseverance through that system,” he continued.

Kresch concluded that there is a breadth of Jewish experiences present within the Jewish community and that it is crucial to appreciate Judaism for its culture and what it stands for.

“A lot of personal parts of the Jewish experience is not really recognized by a lot of people outside the community,” Kresch said. “There’s a lot of stereotypes and assumptions about what Judaism is, which can be very toxic, and I would appreciate it if people were able to see Judaism as a rich and long-standing culture with its own heritage and traditions outside of standard European practices. Just take the moment to appreciate it.”