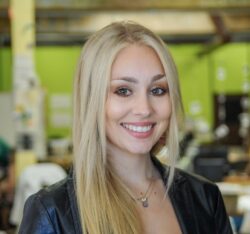 The Nexus believes that Stankiewicz — who is running unopposed as an independent candidate — has both the necessary experience within Associated Students (A.S) and a fair understanding of issues the UC Santa Barbara campus community and Isla Vista residents face to succeed in this role.

Stankiewicz, a current College of Letters and Sciences senator with the Isla Vista Party, is campaigning for External Vice President for Local Affairs (EVPLA) on a platform centered around issues of safety and policing in Isla Vista, alleviation of mold and termite infestations within local housing stock, continuation of community events, expansion of student resources and combating food insecurity.

If elected, Stankiewicz said she would develop an annual report compiling data and statistics on crime and violence in Isla Vista to assist the office in identifying what resources would best serve the community. This policy proposal comes in the wake of a recent string of high-profile crimes — attempted kidnappings and a shooting on Del Playa Drive — that shook the Isla Vista community this year.

“I would really like to institute a safety [report] that outlines everything that happened the entire year with violence and crime so that we can go in specifically and see where these instances are happening and what we can do about resources to mitigate that for community members to feel safer,” Stankiewicz said.

Stankiewicz also called for improvements to the timely warning system by increasing the expediency of notifications, providing trigger warnings and expanding the system to reach all residents of Isla Vista, including permanent residents and Santa Barbara City College students.

The Nexus appreciated Stankiewicz’s affirmation of permanent Isla Vista residents as part of her constituency and her aim to bring resources offered by the office of the EVPLA —  such as public forums and Know Your Rights workshops — to community members unaffiliated with UCSB. Stankiewicz also stated her commitment to supporting unhoused residents in Isla Vista and emphasized the intersection of the houselessness community and student population, which the Nexus finds to be a positive reflection of her candidacy.

“We’re a representative for students within Isla Vista and the local community, but also [for] community members who aren’t directly affiliated with UCSB as well,” she said.

As EVPLA, Stankiewicz would be charged with “serv[ing] as the official representative of the Associated Students on all Isla Vista and Santa Barbara County affairs,” according to A.S. Legal Code. In present practice, she would also have the responsibility of working heavily with local government bodies, such as the Isla Vista Community Services District (IVCSD), Isla Vista Recreation and Park District (IVRPD) and Isla Vista Foot Patrol.

The Nexus believes Stankiewicz demonstrated herself to be up to that task in most capacities.

For instance, Stankiewicz said that she would expand upon existing community-based policing alternatives, such as UCIV — an A.S. Public Safety Commission initiative — and prioritize student safety in her interaction with law enforcement. Stankiewicz also discussed bringing forth a system called CAHOOTS used in Eugene, Oregon where mental health professionals and first responders are prioritized in responding first to calls ahead of law enforcement, which reduced punitive measures taken by law enforcement and violence.

However, the Nexus would like to see Stankiewicz become more intimately acquainted with the operations of local agencies — such as IVCSD, IVRPD and the Santa Barbara County Board of Supervisors — and the issues they are addressing.

Although Stankiewicz exhibited fairly good knowledge of the existence and functions of such organizations in her interview with the Nexus, Stankiewicz noted that she has never attended an IVCSD or IVRPD meeting, a clear shortfall in preparation for the role  since the EVPLA office works closely with both entities.

Stankiewicz currently chairs the A.S. Finance and Business Committee, which allocates an annual budget of $10 million to student groups. As a second-year student, she worked as the resident and housing director for the EVPLA office, where she acted as a liaison to the Isla Vista Tenants Union.

In addition, Stankiewicz is a member of the Alpha Phi sorority and vice president of the Phi Alpha Delta Law Fraternity. When asked about whether her membership in Greek life may affect her capacity to handle sexual allegations or incidents that occur within Greek organizations, Stankiewicz said she does not want her involvement to pose as a conflict of interest and will look to hold offending individuals or groups accountable.

“I don’t think that, by me being a part of Greek life, I’m going to want to not hold them accountable,” Stankiewicz said. “I think that me being in Greek life, I’ve definitely seen instances where Greek life can improve.”

The Nexus retains a few minor reservations about Stankiewicz’s candidacy, primarily her lack of new and innovative project proposals for the EVPLA office to pursue.

Though Stankiewicz was able to identify present projects that the office of the EVPLA is currently pursuing, she did not demonstrate initiative to propose many original ideas of her own. Most of her proposed policy ideas — improving the timely warning system, hosting the Open Market, reopening Pardall Center, expanding the Restorative Justice Program and expanding the A.S. Food Bank — are long-term initiatives undertaken by her predecessor Shannon Sweeney.

Nevertheless, the Nexus believes that Stankiewicz has her finger on the pulse of the office of the EVPLA’s work, has a comprehensive understanding of the local government bodies at play and is deeply passionate about serving all Isla Vista residents.

If she better acquaints herself with the work of local government bodies and creates new ways to better represent the student body to local government, her experience and passion will lead to an excellent tenure as EVPLA.

A version of this article appeared on p. 6 & 7 of the April 14 print edition of the Daily Nexus.