This year’s UC Santa Barbara men’s volleyball squad has gotten off to a fantastic start against conference and non-conference opponents. 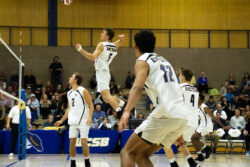 Following a 4-3 start to the season, since the month of February, the Gauchos have been rolling on the court, winning 12 out of their most recent 15 matches.

This run of games is even more impressive due to the number of high-quality opponents they have had to face.

In February, they only faced ranked opponents, losing only to No. 7 USC, who happens to have 3 wins against UCSB this season. On the other hand, UCSB was able to beat No. 2 Pepperdine and No. 11 UC San Diego, and bested No. 9 Grand Canyon and No. 13 BYU twice.

To begin the month of March, UCSB continued their hot form and started the month with four straight matches, beating their opponents in straight sets. Two of these opened up their first league series, in which they beat Cal State Northridge in each contest.

UCSB’s first blip in their recent run of play came against Long Beach State, as they lost the first match 1-3 and the second match 0-3. The most recent conference series, however, fell the way of the Gauchos, as they beat UC Irvine 3-1 and won the second match in 3 straight sets.

On the season, the Gauchos improved their overall record to 16-6 and 5-2 in conference play, putting them in second place behind the only team they’ve lost to in conference, Long Beach State.

In a conference separated by 2 games between first and third place, the Gauchos can continue to improve in a multitude of areas. For instance, the Gauchos rank third in hitting percentage at .298, trailing Long Beach State and fourth-place Hawai’i.

On the other hand, in the other offensive categories, the Gauchos rank in the bottom half of the conference, ranking fourth in assists and fifth in kills-per-match. The service aces are the one area where the team excels, ranking second to Hawai’i.

The defense of the Gauchos is an area where they can easily improve, as they are not ranking in the top two in the categories of opponent digs, opponent blocks, opponent kills, opponent assists and opponent hitting percentage. The area they excel in once again relates to the beginning of the play with opponent serve aces ranking the Gauchos second in the conference.

The Gauchos are in a prime position to finish the season strong and will need to continue their craft of solid offense, but clean it up on the offensive end.