The closure of a UC Santa Barbara campus bike path near the Student Affairs and Administrative Services Building due to ongoing construction is causing detours and other disruptions for bicyclists in the campus community. 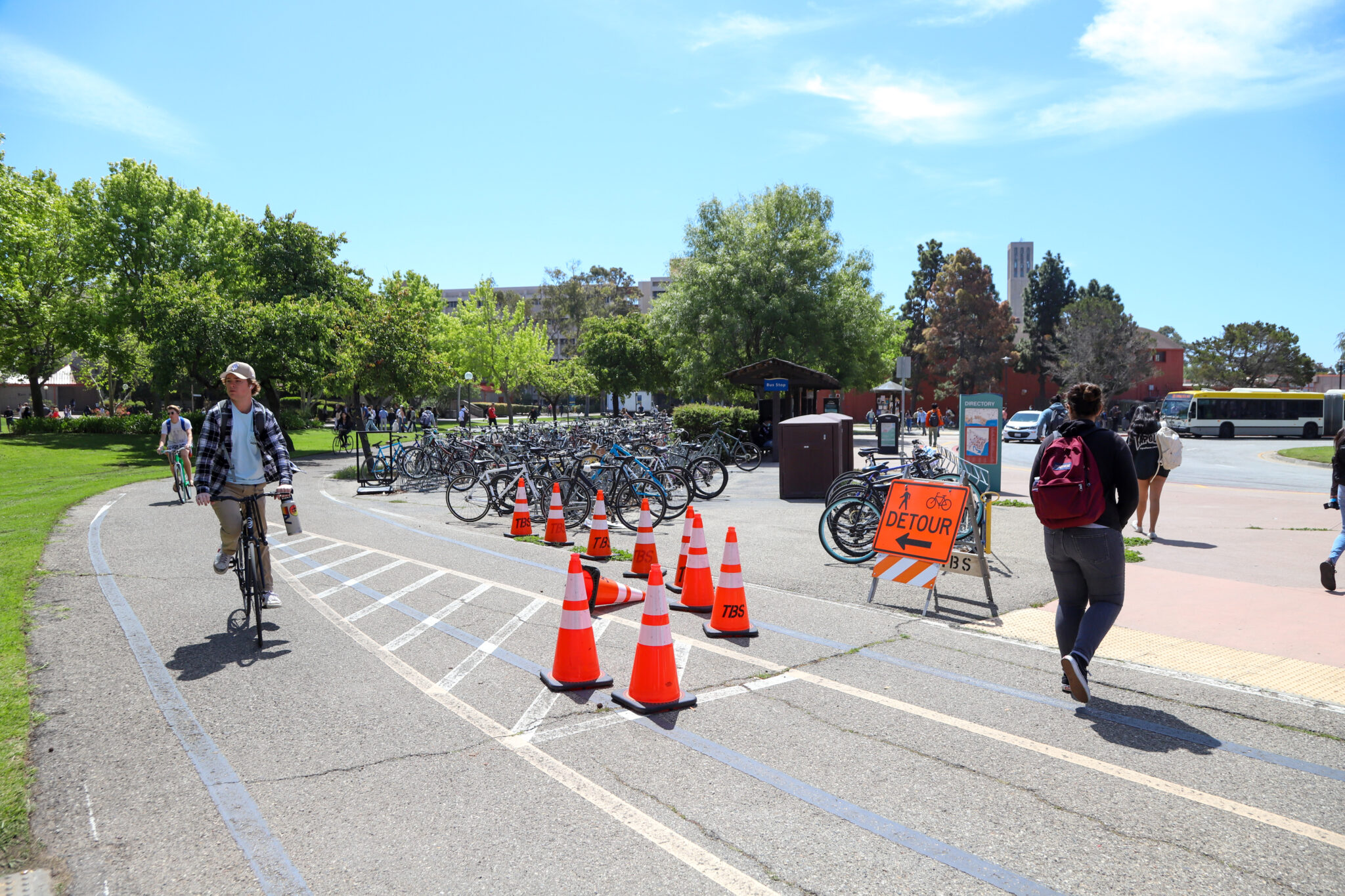 The bike path is being impacted by two projects: repairs to the Ocean Road underpass and the continued construction of the Associated Students Bike Shop. Pablo Van Dyck / Daily Nexus

The bike path is being impacted by two projects: repairs to the Ocean Road underpass and the continued construction of the Associated Students Bike Shop, according to UCSB spokesperson Shelly Leachman.

The Ocean Road underpass repairs caused the closure of the bike path’s tunnel section since March 1, and the underpass is expected to be reopened on April 8, when construction is completed.

“Bicyclists traveling that section will need to continue to dismount and walk their bicycles through the designated areas,” Leachman said in a statement to the Nexus.

The repairs to the Ocean Road underpass have long been a project in the making on behalf of UCSB’s Design & Construction Services, according to Leachman.

“Portions of the underpass were beginning to deteriorate, warranting repair,” she said in a statement to the Nexus.

Leachmean further explained that the section of the bike path on the west side of the Student Affairs and Administrative Services Building (SAASB) is closed off due to the construction of the Associated Students Bike Shop, and this construction is expected to go on for several more weeks.

According to UCSB Design & Construction Services, signage and gates were increased to provide bicyclists with more warning on these closures and to improve the overall safety of cyclists and pedestrians near SAASB.

“We understand construction of the new AS Bike Shop as well as the safety upgrades to the Bike Tunnel have caused the congestion,” said Ed Schmittgen, associate director and building official of UCSB Design & Construction Services, in a mass email to the UCSB student community. “While an inconvenience today, this is a long term investment in the cycling infrastructure at UCSB.”

Students spoke to the closure of this part of the bike paths throughout UCSB’s campus causing mild disruptions and delays in their everyday commute to campus.

Third-year economics major Liam Goodin said although the bike path closure has not made him late to classes, it resulted in significant detours on his daily commute to campus.

“Recently, I’ve been going through the detour, going past the [Recreation Center] and walking across the street,” he said. “It still is a hassle; it’s a thorn in your side no matter what, but it’s not that bad. It’s just an inconvenience.”

Goodin said he now leaves his home earlier to get to class on time.

“I have to leave a lot earlier. I’d say I leave 20 minutes before class because of [the closure],” he said. “It’s not that big of an inconvenience, but it’s still annoying. It would be a lot better if the bike tunnel was open.”

Leachman said Design & Construction Services understands the inconvenience the closure has been for users of the bike underpass, but only a few students have asked direct questions to the team in regards to the project.

Leachman added that due to concerns around safety, Design & Construction Services created an alternative bicycle route through signage that instructs cyclists to dismount and walk.

“Bicycle riding on sidewalks and in areas on campus where it is not permitted is extremely dangerous both to bicyclists and to other members of the community and can result in fines,” she said.

“[The closure] definitely added a noticeable amount of time to my commute to campus, especially for my classes that are on that end of campus,” Gonzalez said.

Because of the closure, Gonzalez said he takes an alternative path that travels past Storke Tower and Girvetz Hall, and he also noticed a significant number of cyclists biking through the road past the Humanities and Social Sciences Building (HSSB).

“I see people going [on the bike path] past HSSB, even though biking is not allowed there, but people are still taking that route,” he said.

Gonzalez continued that because there is cyclist traffic going across this section of the bike paths, attempting to go through this detour is a safety hazard.

“I myself am as well cut on time, but I’m noticing that it can be a danger sometimes because I noticed some students jump the cross sign and cross the road while the crossing traffic is at a green light,” he said.

In addition to the detours, the closure of the bike path near SAASB is causing crowding in the bike racks near the Recreation Center, Gonzalez said.

A version of this article appeared on p. __ of the April 7 print edition of the Daily Nexus.