As part of a collaboration between Isla Vista Compost Collective and St. Michael’s University Church, local artists painted a mural on the collective’s bike shed at the church titled “The Sacredness of the Waters: Salty and Fresh.” 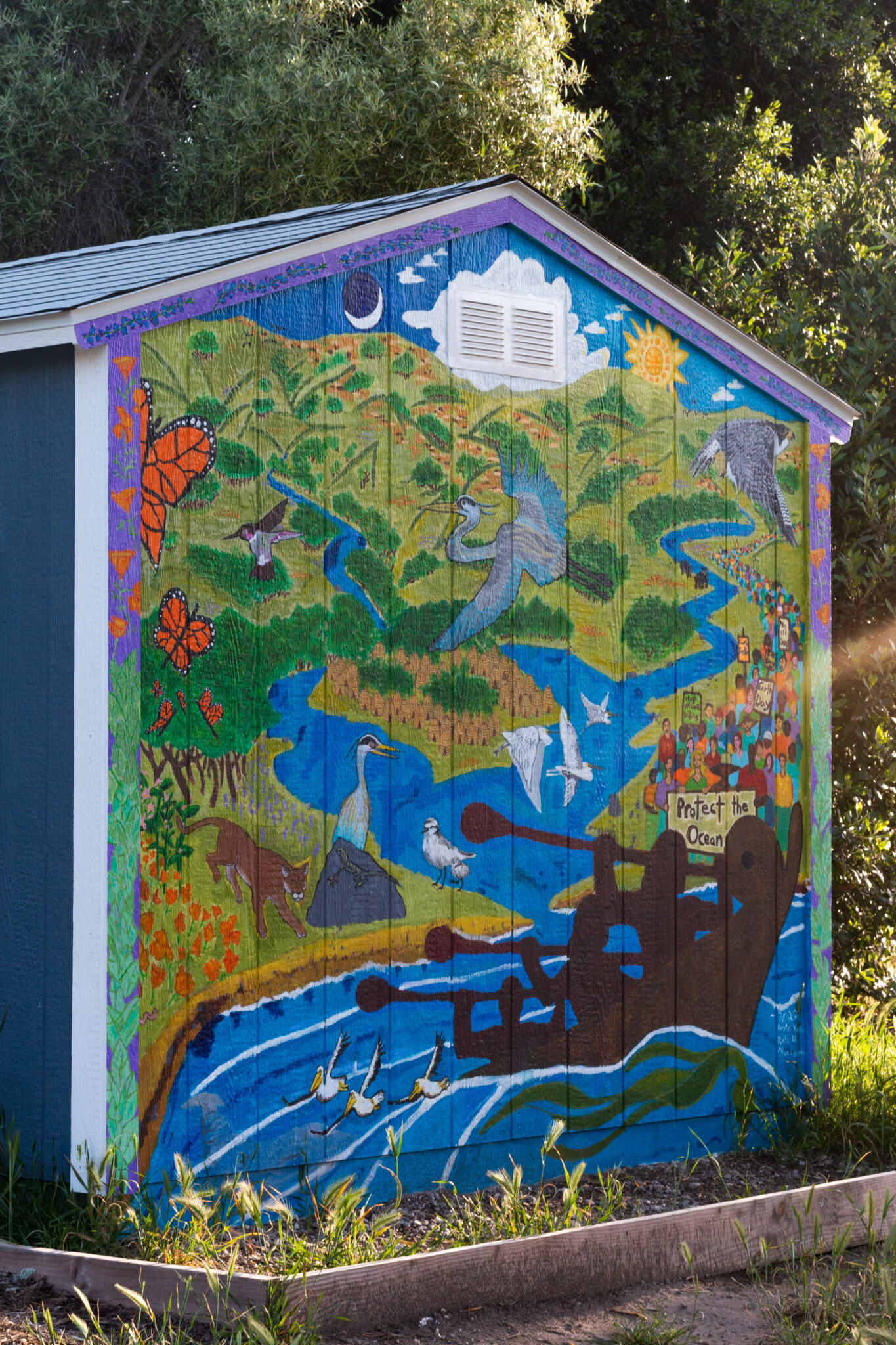 The collaboration between IVCC and St. Michael’s University Church began with the collective looking for a permanent location to carry out its operations. Ewa Zakrzewska / Daily Nexus

The mural is part of I.V. Compost Collective’s (IVCC) efforts to promote a sustainable community through composting, and showcases the Chumash history of environmentalism in Santa Barbara.

IVCC is a service under Isla Vista Community Services District (IVCSD) that provides free composting services through a food scrap pick-up service for local residents. The program started in 2017 upon being awarded a grant from IVCSD.

The village scene depicted in the mural represents an indigenous Chumash village that was situated near the Goleta slough watershed, which once had a central island in the area near Santa Barbara airport, according to IVCC Program Manager and UCSB 2021 alumna Carly Marto.

Among the donations for the mural was the bike shed on the church’s property, for which Reverend Scott Claassen found local artists to paint a mural on.

“Pastor Scott is a very devoted environmentalist,” Marto said. “He has been very supportive of us and very helpful along the way, and I think that is why the mural came to be.”

“He found these really awesome artists [who came to] paint a mural depicting a … historical representation of environmentalism and taking care of the earth,” she continued.

Upon the mural’s completion, the church had a Sunday service where they presented the mural’s dedication.

“Here at the confluence of Chumash history, natural paradise, and harmful settler colonial legacy, we commemorate the powerful public mobilization in response to the 1969 oil spill that catalyzed a global movement of earth justice,” the mural’s dedication states.

This island provided a home to two large villages, nearing 800 residents at the population’s peak, according to the dedication.

“This island (called Helo’ or Mescaltitlan) with its two springs provided home to two large villages, at one point nearing 800 people with diverse nutritional sources: abundant oak acorns to process as staple food, small game in the woodlands, and of course seafood in the waters,” the dedication continued.

However, due to policies implemented during the Mission Era — an era of California missions that forced the conversion of various indigenous peoples to Catholicism — Chumash communities were displaced, and the islands and lands of the Chumash people were irreparably harmed, according to the dedication.

Deforestation and overgrazing in the 19th century, the leveling of the slough in World War II[[ok]] and the 1969 Santa Barbara oil spill[[ok]] created the land’s current state of ecological imbalance, the dedication said.

“This mural invites a reconnection to love these lands, examine our callings, and fight for their rights and health once again,” the dedication continued.

Grace emphasized that the mural reflects the “natural beauty” of Isla Vista, from the local wildlife to the history of the people who have resided in the town.

“I.V. is a place with a lot of incredible history, and our hope is to reflect the natural beauty of both the landscape and the people,” he said. “When we do murals especially, we [like to] celebrate the local flora and fauna, and hopefully this helps people get to know the place and love the place where they live.”

Beyond painting the nature of Isla Vista, Grace said the mural is also meant to stir conversations of environmental responsibility.

Speaking to this responsibility, Grace said he observed the contradictions of Isla Vista when working on the mural.

“Isla Vista is out of balance,” Grace said. “Ecologically speaking, the slough, —  what was once a paradise just a few hundred years ago — is a toxic waste dump, and you could see how it harms the natural community.”

“We hope that we will pull out some of these contradictions between this beauty and this responsibility [with the mural],” he continued. “But really, this place is paradise.”

A version of this article appeared on the p.  __ of the April 7 print edition of the Daily Nexus.