Natalie Mering, widely known as the artist Weyes Blood, released her critically acclaimed album “Titanic Rising” on April 5, 2019. The album exists as a vulnerable collection of young adult experiences, all of which click together like puzzle pieces. 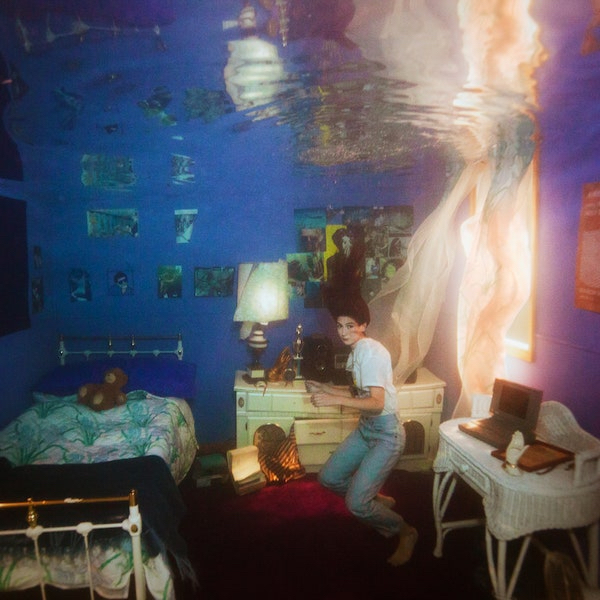 The album cover is a childhood bedroom submerged in water, with Mering floating in it. As you’re growing up, your bedroom is your safe space; it’s where you keep things hidden, where you dream about all of the things you want, where you are your unadulterated self. This bedroom is where you grow, both emotionally and physically. So much change happens in this space, but sometimes it’s hard to even notice that this change is happening. By having this bedroom submerged in water, it seems as if Weyes Blood wants to pause the growth process that happens in the bedroom; she wants to make everything stop, just for a moment. She floats around in the room and looks around at all she can see; she is quite literally soaking in everything around her.

The album begins with the track “A Lot’s Gonna Change,” in which Weyes Blood sings, “I’d go back to a time when I was just a girl, / When I had the whole world / Gently wrapped around me.” This entire album is a reflection of Mering’s childhood, a time when she didn’t know what the intentions of those around her were; she felt as though the world was just “gently wrapped” around her.

The second track, undoubtedly the strongest on the album, “Andromeda” focuses on Weyes Blood’s fascination with astronomy and mythology, and how she has found comfort in these areas of study because she sees them as escapes from the male-oriented world she lives in. She sings, “Looking up to the sky for something I may never find.”

There’s also this sense of wanting to be saved by a man in this track; I don’t think this is an internally sexist thing for her to believe. I think Weyes Blood just wants to be loved by a man, and wants him to work hard to get her. Mering says, “If you think you can save me / I dare you to try.” In an interview about this album with Believer Magazine, Weyes Blood said that, “It’s a lot to ask somebody, of a man especially, to be like, can you please draw me out of my hardened shell and make me soft again?”

The track “Everyday” speaks on dating in the modern world and how intense and tiring it is. This track is about the desire to be loved everyday, but also reveals just how difficult it is to find that love, especially for young adults today. She sings, “Someone sincerely looked at me / And said, ‘Is this the end of all monogamy?’ / And I said, ‘Not today / Then again, you might be right / Then again, sleep the night.’” This track is a critique of what love has become in the 21st century; Mering hopes that true, genuine love can actually manifest itself, and that everyone can experience it.

“Something to Believe” tells the all-too true feeling of struggling to find meaning in our lives. Mering sings, “Give me something I can see / Something bigger and louder than the voices in me / Something to believe.” Weyes Blood wants to find that reason to keep waking up in the morning. She says, “Please give me a sign soon / Really wanna find out the truth.” This track is somber and hopeless, and its melody leads perfectly into the following interlude “Titanic Rising.”

The self-titled interlude ties the album together with its crisp instrumentation and almost mythological undertone. Listening to this album often makes me feel like I myself am floating in all the places I’d spend time at during my childhood.

Weyes Blood discusses her love for movies in the track “Movies.” She wishes her life could be like the movies that she loves; movies have clear, specific plots so there aren’t any surprises, and Mering longs for that simplicity in her life. Weyes Blood wants to find the deeper meaning to her life like the characters do in the movies she watches, but she also realizes that that isn’t realistic. She sings, “​​The meaning of life doesn’t seem to shine like that screen.”

“Mirror Forever” is the seventh track on “Titanic Rising” and it focuses on relationships. Weyes Blood finds power in being alone (and actually being comfortable when alone) when she sings, “No one’s ever gonna give you a trophy / For all the pain and the things you’ve been through / No one knows but you.” She goes on to say, “Got a feeling our romance doesn’t stand a chance / Stand a chance to last / You threw me out of the garden of Eden / You lift me up just to let me fall hard / Can’t stand being your second best.” This relationship wasn’t sustainable, and it left Mering feeling happy to be alone for once. She doesn’t want to be a second choice, the “second best.” Ever.

Perhaps the only way to ensure that you won’t be a second choice is if you give yourself time to be alone. When you maintain solitude, you are directly putting yourself at the top.

“Wild Time,” the eighth track on this album, beautifully highlights love in a crumbling world. She sings, “I’m wonderin’ how we ever got here / With no fear we’d fall.” It’s hard for Weyes Blood to believe that love is achievable in such a broken world.

“Picture Me Better” is an ode to a friend of Mering’s who committed suicide while she was working on this album. She sings, “Can’t help to smile with those eyes that shine on me / If only you could see.” Weyes Blood goes on to sing, “If I could’ve seen you just once more, tell you how much you’re adored.” Mering regrets not telling her friend how much she meant to her. The song ends with these lyrics: “Waiting for something with meaning / To come through soon.”

This entire album can be summarized into a search for some semblance of meaning in one’s life, and this last set of lyrics on the album perfectly captures this. The last track on the album is “Nearer to Thee,” a melancholic instrumental that perfectly concludes this masterpiece of an album.

Such an amazing album! I still listen to it to this day!