The Daily Nexus
Events
Rapper Flo Milli and Producer Pi’erre Bourne Bring the Heat to The Warm Up
April 7, 2022 at 3:00 pm by Sunidhi Sridhar

After flooding Del Playa Drive in a drunken stupor in observance of Deltopia — Isla Vista’s most cherished annual holiday — on Saturday, April 2, hundreds of students headed to the Thunderdome to see 2021 XXL Freshman inductee Flo Milli and hip-hop producer Pi’erre Bourne take the stage at this year’s The Warm Up concert. 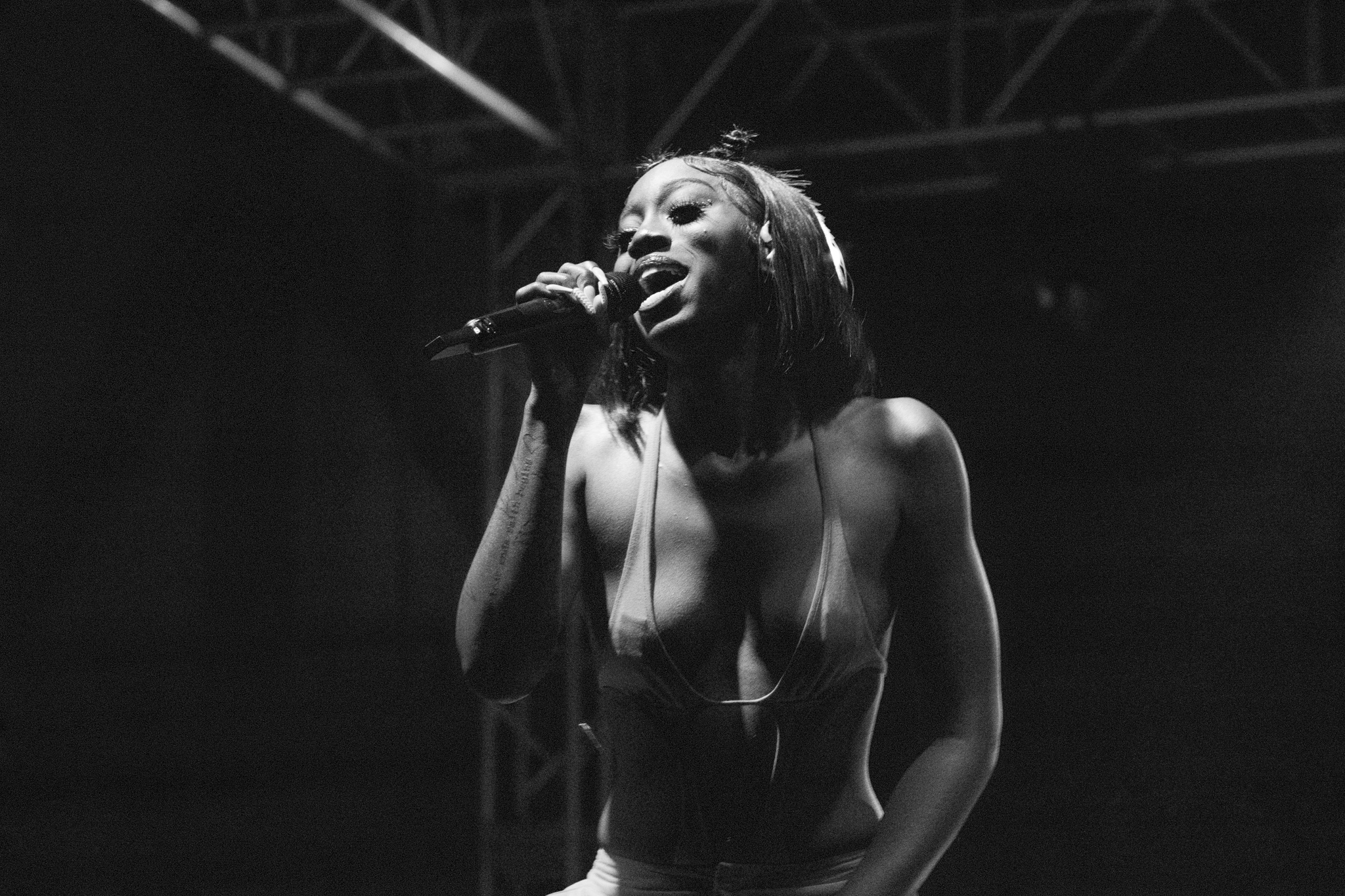 Tickets to the show, which is organized by the Associated Students (A.S.) Program Board on the first weekend of every spring quarter in an effort to contain any unrestrained and disorderly behavior post-Deltopia, were exclusive to UC Santa Barbara students. Doors opened at around 6:30 p.m. as the line to enter the venue wrapped around Lot 22, and some attendees immediately made their way to the front of the crowd while others, worn out from the day’s festivities, sat down on the tarp and hung out with their friends.

Just after 7 p.m., A.S. Program Board Special Events Coordinator Kim Kryshak welcomed the audience and thanked them for coming. “Shout out to all of our students who pay lock-in fees that go toward putting on great events like this,” she added.

A.S. Program Board Special Events Assistant Lauren Schaeffer proceeded to introduce DJ KZA, an up-and-coming, open-format DJ from San Diego. “Santa Barbara, how we feeling? Y’all ready for Flo Milli and Pi’erre?” he asked the crowd as he bounded onto the stage, who clapped and cheered in response. As concertgoers continued to stream into the Thunderdome and scan the room for their friends, DJ KZA dived right into his 40-minute-long set with an EDM-infused remix of Travis Scott’s “NO BYSTANDERS.” 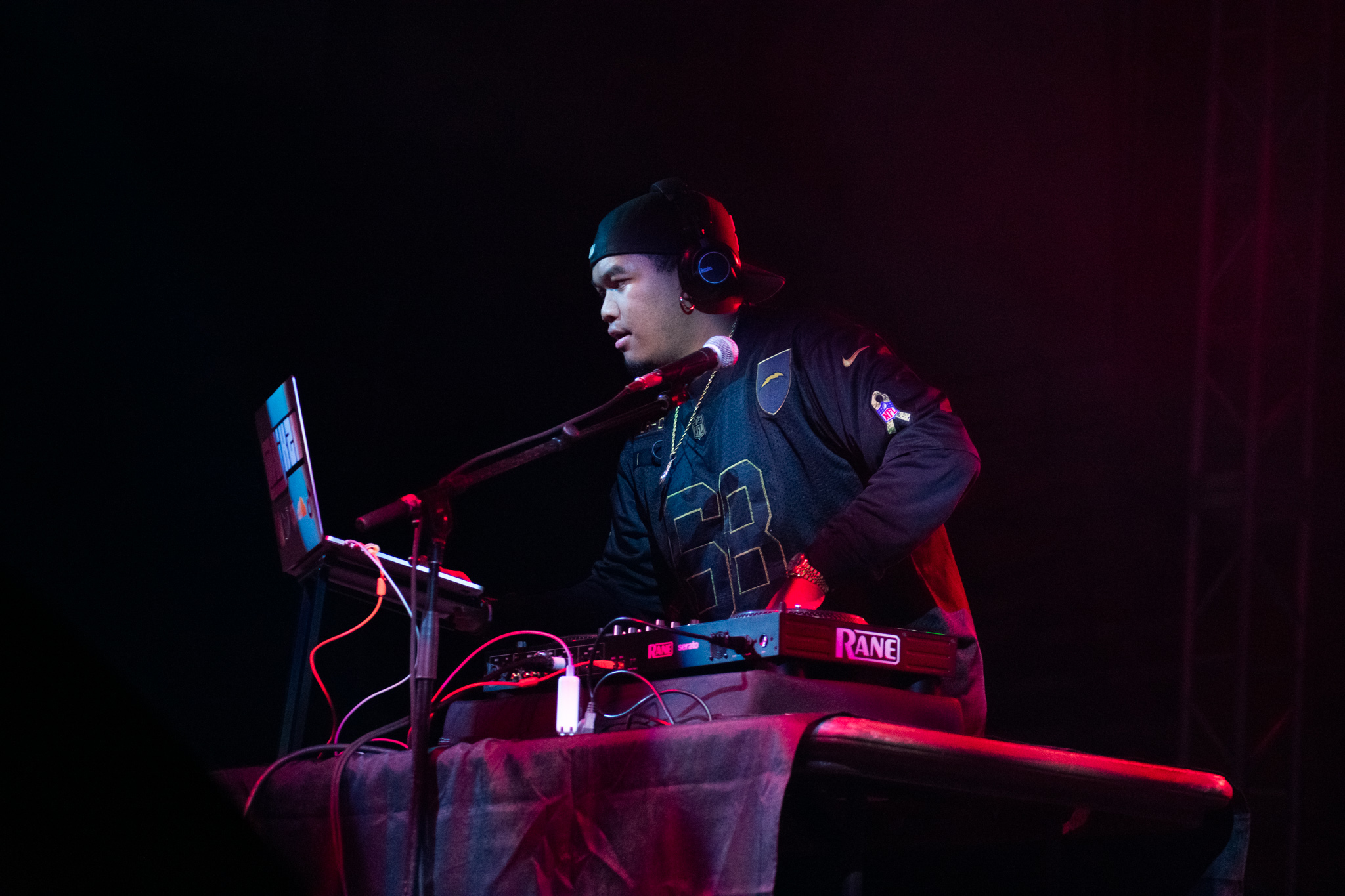 During a brief intermission after the opening set, many students chose to sit down at the back of the room with their friends, exhausted from being on their feet all day long. The floodlights abruptly dimmed on the audience, however, and the buzz of conversation and laughter was replaced with raucous screams as students scrambled to their feet and ran to the stage in anticipation of Bourne.

Screams of excitement and anticipation filled the air as his iconic producer’s tag — “Yo, Pi’erre, you wanna come out here?” — boomed down from the speakers. Feeding off of the crowd’s energy for his entire hour-long performance, Bourne cycled through almost his entire discography as amped-up fans thrashed around in the mosh pit. The setlist opened with the 808 drum-heavy “Yo Pi’erre!,” the producer’s 2017 single featuring frequent collaborator Playboi Carti, and was followed by “Hacked My Instagram,” “Honeyberry” and “Poof,” the latter being a standout track from his debut studio album, “The Life of Pi’erre 4.” 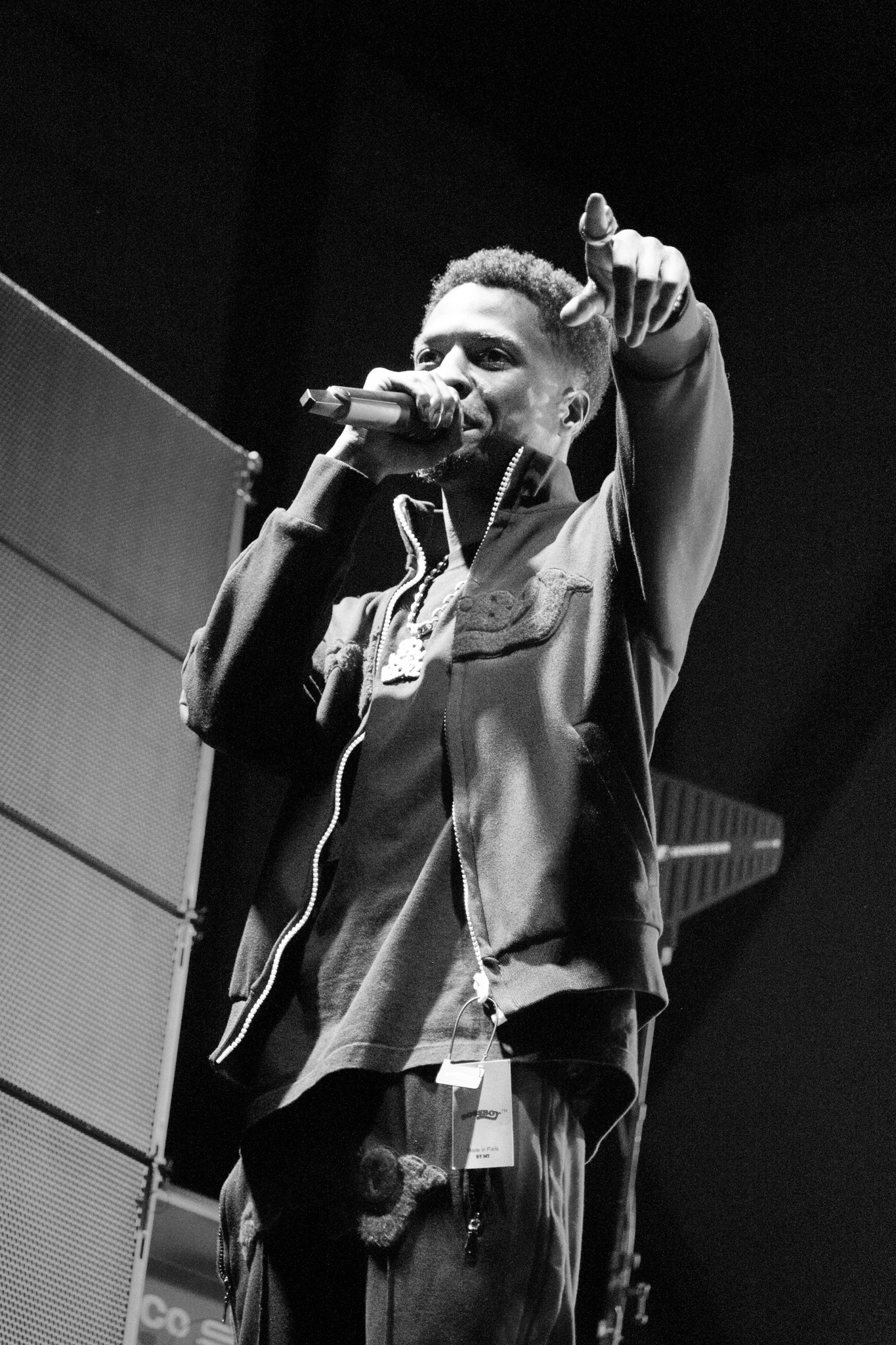 The rapper also performed several songs from “The Life of Pi’erre 5,” his second studio album that was released last June, including the Playboi Carti-assisted “Switching Lanes,” “HULU” and “Couch.” A man of few words, both in and out of the studio, he told the crowd, “I gotta go. Peace,” and abruptly left the stage.

If the roars of approval and enthusiasm were anything to go by, the majority of the audience was in attendance to see Milli, an Alabama-raised rapper who rose to fame after her song “Beef FloMix” became a viral sensation on TikTok in 2019.

The “PBC” hitmaker took the stage amid cheers of “Flo Milli” and immediately wanted to know: “Where my bad bitches at?”

She opened with “Mood Everyday (Intro),” the first track off of her 2020 mixtape, “Ho, why is you here?” A testament to Milli’s stage presence and versatility as a musician, the exhilarating energy was almost electric in the air as people danced along and her most devoted fans screamed each bar in sync.

“I’m gonna need y’all to make some noise,” she said, and the crowd, only too eager to oblige, almost drowned out the intro to “Like That Bitch.” The 22-year-old songstress followed with “Beef FloMix,” her most recognizable record to date, and her “Flora the Explorer” remix to the “Backpack” song from the children’s show “Dora the Explorer.” 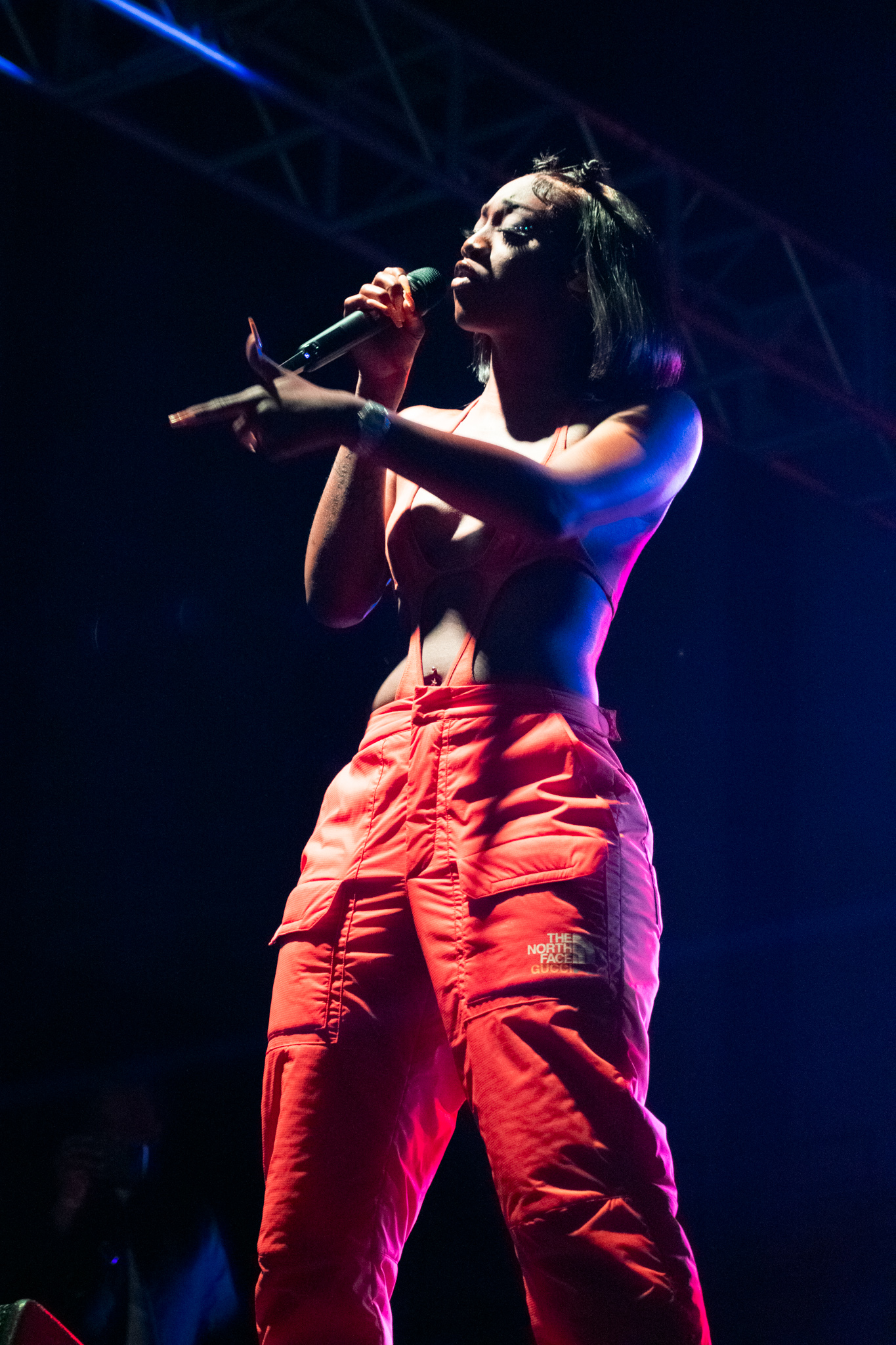 Toward the end of her set, Milli invited the audience to sing along as she did an a cappella rendition of the first few bars from the song “I Am”  by Baby Tate, on which she is featured. “I am healthy, I am wealthy / I am rich, I am that bitch / I am gonna go get that bag / And I am not gonna take your shit,” rang out from the crowd before the beat dropped. “I need y’all to sing this shit with me, come on y’all,” she told the audience.

The rising rap star closed out her performance with three tracks from her mixtape — “Weak,” “Not Friendly” and “In The Party” — before signing off for the night.

Katarina Bongardt, a fourth-year economics and communication double major, is a longtime fan of Milli and attended the concert with her housemates and boyfriend.

“It was the best five dollars I’ve ever spent. She was such a high-energy performer and so talented,” Bongardt said. “You could tell she was really excited to be there, and she even interacted with the crowd during ‘In The Party.’ Even though her set was a lot shorter than Pi’erre Bourne’s, it was totally worth the wait.” 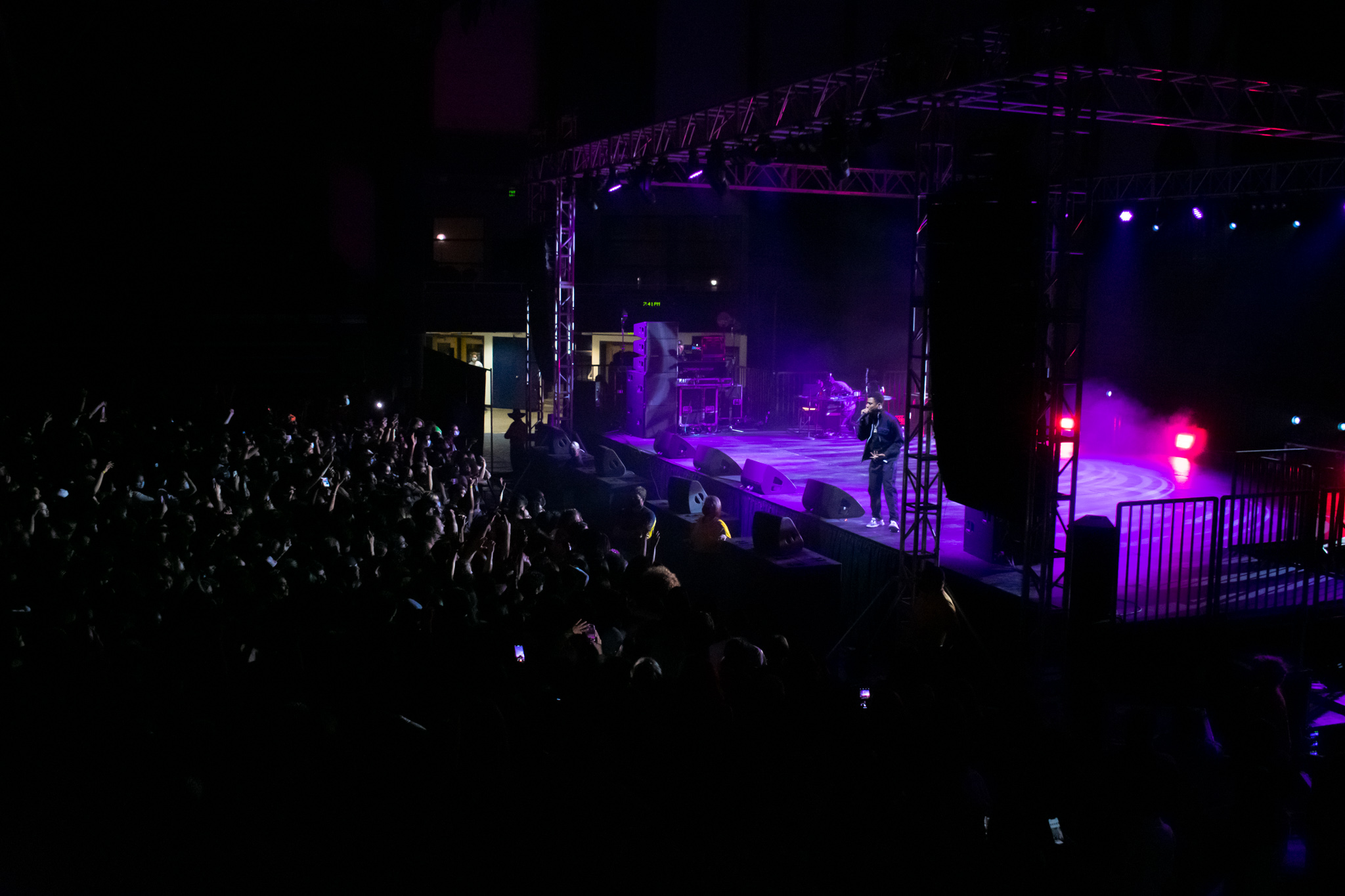 “I thought it was worth staying until the end. There were a few awkward gaps between sets and a good portion of Pi’erre songs I wasn’t familiar with, but all the waiting was worth it for Flo Milli,” said Alison Schwartz, a third-year economics and communication double major. “Her stage presence was excellent, and it was a great end to a wild Deltopia.”