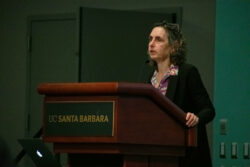 Elizabeth Kolbert speaks at the Interdisciplinary Humanities Center’s “Regeneration” Series about her new book, “Under a White Sky.” An award-winning science journalist, Kolbert works as a staff writer for The New Yorker. Photo by Ida Kazerani.

On Monday, April 4, UC Santa Barbara’s Interdisciplinary Humanities Center hosted a lecture — the latest in their annual Public Events Series —- by science writer and journalist Elizabeth Kolbert, who spoke to an engaged and energetic Corwin Pavilion audience about her newest book, “Under a White Sky: The Nature of the Future.”

This year, the program’s theme is “Regeneration,” and, according to the Interdisciplinary Humanities Center (IHC)’s website, the series aims to bring together both local and international voices from various humanities fields to discuss “institutional transformations, creative expressions, activist interventions and philosophical recalibrations needed to establish foundations of solidarity upon which new futures can be realized.”

If anyone is well versed in the current problems that humanity faces and is prepared to speak on the ways in which we can attempt to solve them, it is Kolbert. An accomplished staff writer for the The New Yorker, Kolbert has received many awards for her writing and for her work in journalism. Most notably, she was awarded the 2015 Pulitzer Prize for general nonfiction for her book “The Sixth Extinction: An Unnatural History,” which looks at the five major extinctions throughout our planet’s history, as well as the sixth extinction which Kolbert argues we are currently experiencing.

Her new book, “Under a White Sky,” discusses humans’ effects on the environment and explores whether we can hope to make an impact for the better and save our planet once and for all. It also looks at what technological tools we have at our disposal that may help us fight the climate crisis.

In Monday’s talk, Kolbert addressed several topics that she discusses in “Under a White Sky,” including problems such as atmospheric warming and the possibilities and implications of technologies like gene editing and geoengineering. Kolbert introduced herself as an environmental reporter and emphasized that she does not see herself as an advocate.

“I’m a journalist,” she said, “which is to say an observer. I don’t really see my role [in terms of] telling people what we should be doing or where we should be going, but to report what we are doing [and] where we are headed.”

She also mentioned that the stories she writes about have “largely been concerned with stories of decline and disaster,” topics that she said don’t directly relate to the series’ topic of regeneration except “insofar as the damage we’re doing to the planet makes regeneration critical to our future.”

She began by telling a story — a fable, she called it — about the cane toad, a species of toad native to Central and South America which was introduced to Australia in the 1930s to try and mitigate the effects of beetles on sugar cane plantations. However, the species has ended up proliferating, and due to its high levels of toxicity, has wiped out entire populations of native predators. Kolbert then talked about efforts that Australian scientists are making to use gene-editing technologies to alter the specific enzyme that makes the toads’ secretions deadly, hoping to gain control over the toads’ destruction of native animal populations.

The cane toad has become emblematic of the current problem of invasive species and served as a very pertinent introduction to the evening’s theme of “regeneration” and the struggles we are facing in trying to solve the myriad of problems we have created. It also reminds us that attempting to solve such problems by imposing even more levels of human control on the environment can often only serve to make the system worse.

Another example that Kolbert gave regarding the stubborn nature of humans to opt for more and more control, instead of scaling back or changing our lifestyle to better adapt to our environment, is the significant issue of flooding in New Orleans, Louisiana. When New Orleans was first established by the French in the early 18th century, quite soon after the first buildings were erected, the Mississippi River flooded and left parts of the new city submerged for many months. However, instead of moving to a different area away from the river, the settlers decided to put levees in place to help quell the floods. And the city continues to do this to this day, despite global warming and devastating flooding caused by storms such as Hurricane Katrina. In telling this story, Kolbert made the point that while these feats of engineering are impressive and cutting edge, they are not sustainable, long-term solutions.

Kolbert also made it clear that we should be very wary about using powerful techniques such as gene editing or geoengineering to “fix” our problems, such as those of invasive species or increased levels of atmospheric CO2, and that instead we should be focusing on scaling back our current harmful practices. At the same time, she admitted that we aren’t exactly succeeding in doing that. “While scaling back is not just a good idea, but probably now a necessary idea, the exact opposite seems to be happening,” she said regarding recent news headlines of record high carbon dioxide emissions and rainforest deforestation.

In response to these points, an audience member asked where that leaves us in terms of possible solutions to the climate crisis and what we as a society should be focusing on. Kolbert responded that “it leaves us right where we are … and that we should be focusing on doing a lot more with a lot less.” She went on to say that “we are in a pretty terrible bind right now, but that doesn’t mean that all is lost, or that all hope is lost, but it does mean that there is no easy answer here.”

While the situation appears bleak, Kolbert still hopes that if we can collectively decide to make immediate, drastic changes to the harmful practices at the root of all climate problems instead of exploiting technology we don’t necessarily have the capacity to fully understand, we can mitigate some of the worst effects of climate change. The challenge, however, is that while “[w]e turned out to be technologically extremely capable, we are socially not very capable.”