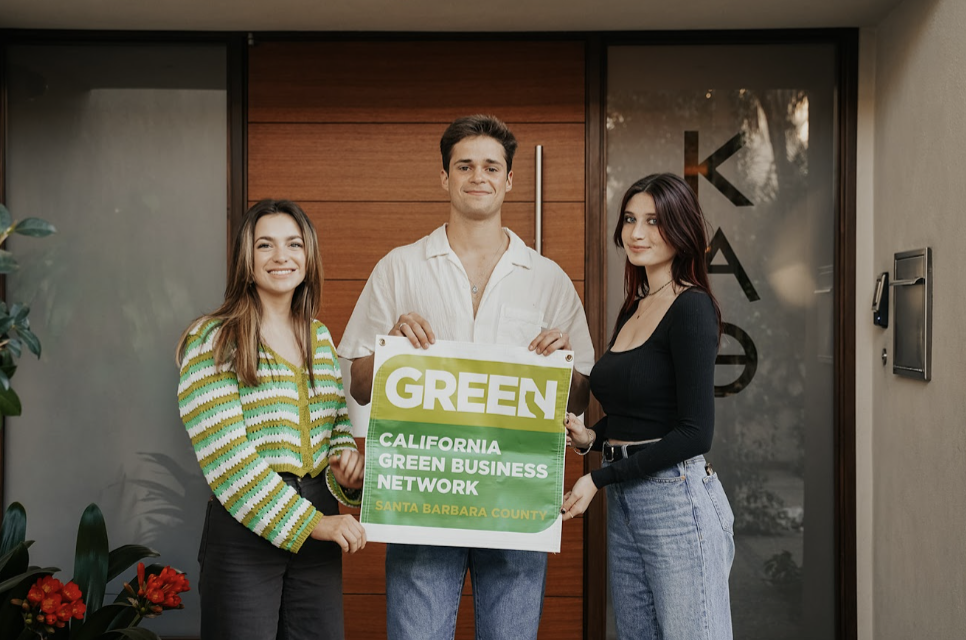 Merigot, Lynch and Pollack all expressed great pride and excitement at the green certification, citing it as an example of tangible sustainability. Courtesy of Kappa Alpha Theta

The Green Business Program of Santa Barbara County is part of a statewide Green Business program that provides “resources, assistance, and evaluations” for businesses aiming to significantly reduce their carbon footprint and practice sustainability, according to a March 29 press release from the program.

The checklist measures low-energy light fixtures, low-flow faucets and toilets, transportation, and reduced plastic and trash consumption, among other environmentally friendly measures, and is overseen by representatives from Santa Barbara County’s water, transportation and green business sectors, among others.

“The process does look slightly different because it’s not officially a business,” Merigot said. “So there’s a few items that don’t apply. But we worked in partnership with a lady that works for [the Green Business Program], and she would add some items that were more applicable to a sorority house.”

Second-year sociology major, Kappa Alpha Theta Sustainability Chair and Greeks Go Green member Hudson Pollack said that one challenge came from the checklist requirement to divest entirely from single-use materials like plastic cups and utensils in a chapter house where over 40 members reside and eat meals.

“Because of COVID, it was a health hazard to use plates that everyone was using because it’s a communal place. So for a while, that was like a really big dilemma,” she said. “And I feel like that’s very different, had it been a normal household or restaurant where there’s more efficient supplies and utilities for [cleaning].”

Pollack said that she worked alongside Greeks Go Green and Kappa Alpha Theta members to complete the individual tasks required of the checklist’s completion.

“I had to calculate the amount of volume waste that was produced, like trash and recycling per week, in regards with the size of the trash can … and then there’s a whole thing where I had to measure the flow of the actual water coming out of the showers to make sure it was like under a certain number,” she said. “There’s a lot of different components that you wouldn’t necessarily think that go into making an establishment green certified.”

Fourth-year environmental sciences major and Greeks Go Green President Kristin Lynch said that the program hopes to get more Greek chapter houses certified in the near future, although the environmentally friendly modifications necessary for certification can be more difficult to implement if a Greek organization rents rather than owns the chapter house.

Merigot agreed, and he said he believed Kappa Alpha Theta’s certification might inspire other Greek chapter houses to do the same. Currently, UCSB sorority Pi Beta Phi is next on track to be green certified, he said.

“There’s also the idea of sending an example in a sense, and saying, ‘One sorority house did it, and now they’re green certified,’ and this should make you — and by you, I mean, other houses — you should want to also do the same,” Merigot said. “It’s setting an example for other people to follow in our footsteps, and say, ‘Oh, it’s not that hard.’”

Merigot said the Greeks Go Green community, while originally focused on making Greek life more sustainable, is open to all UCSB students interested in the environment.

“Greeks Go Green is a club founded in 2018, and we started in order to try to make Greek life more sustainable. We have different committees that each focus on a different segment of sustainability,” Lynch said.

Merigot, Lynch and Pollack all expressed great pride and excitement at the green certification, citing it as an example of tangible sustainability.

“Everyone talks about environmental change, climate action — it’s a great thing to talk about,” Merigot said. “But to have proof of having done something significant that you can show other people is a great thing as well. And we’re all very proud to be part of it.”