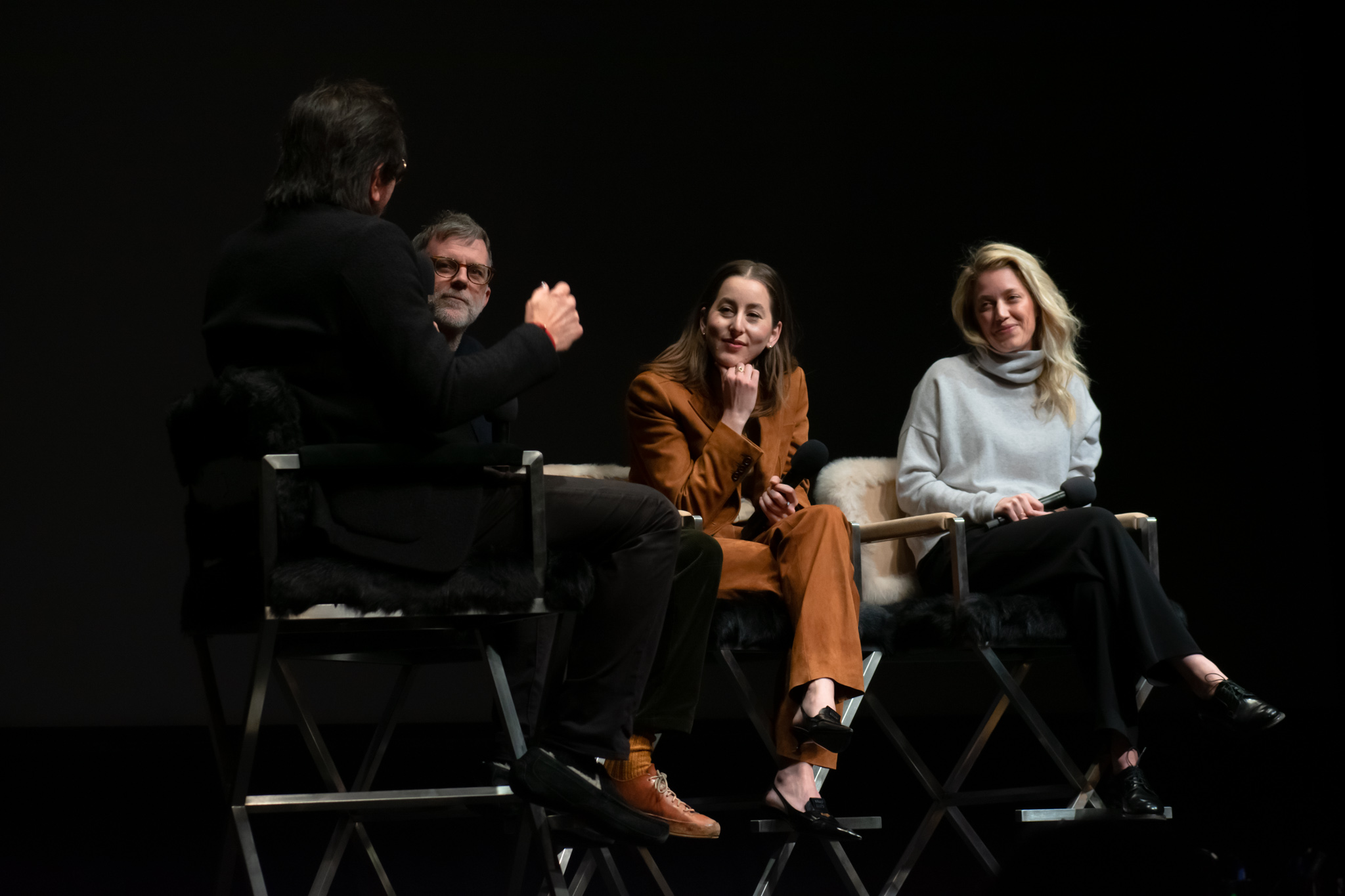 This event was one of the major film screenings at the 37th Santa Barbara International Film Festival (SBIFF)l. Before the screening, Durling came onto the stage and asked the crowd, “Are you as excited for Paul Thomas Anderson as I am?”, which was met with applause. Durling then thanked donors and sponsors, before noting that donations to the festival were being donated to relief for those affected by Russia-Ukraine War, and pointed out that $54,000 had been collected in relief aid through the festival so far. As the film began, there were advertisements for SBIFF, including UGG (one of the sponsors of the festival), and a thank-you note for the 400 volunteers, which was met with a round of applause.

For those of you who have not seen the film, “Licorice Pizza,” set in 1973, tells the story of 15-year-old Gary Valentine (played by Cooper Hoffman, son of the late Philip Seymour Hoffman — a frequent collaborator of Anderson) who falls in love with 25-year-old Alana Kane (played by Alana Haim). The age gap between the two characters has caused some controversy among moviegoers, who have noted the predatory foundation of the relationship.

The film opens on school picture day, in California’s San Fernando Valley, as Alana, a photographer’s assistant, walks up and down the line of students that are waiting to get their picture taken, offering a comb and mirror. Gary notices and is immediately smitten by Alana. He strikes up a flirtatious conversation with her and proposes they go on a date. Noting their age difference, she declines. However, later that same day, she offhandedly shows up to the Tail o’ the Cock, a frequent hang out of Gary’s. Gary — a resourceful teen — is a working actor and a crafty businessman who runs an advertising agency, among other ventures, alongside his mother, “Momma Anita” (played by Mary Elizabeth Ellis).

One of their clients is Jerry Frick (played by John Michael Higgins), the proprietor of Mikado, a Japanese restaurant in the Valley who, during two scenes, assumes an outlandish Japanese accent as he consults his wife Mioko, and later Kimiko. These scenes have prompted Asian American activists to call Anderson’s film racist. Controversies withstanding I think “Licorice Pizza” is a worthy addition to Anderson’s oeuvre, and an otherwise enjoyable film filled with memorable cameos, and bit parts, by luminaries like Tom Waits, George DiCaprio (father of Leonardo DiCaprio), and Sean Penn. In fact, one of the best performances of 2021, which was snubbed by the Academy, is Bradley Cooper’s portrayal of  Barbra Streisand’s ex-boyfriend and “A Star is Born” producer Jon Peters.

The film features a stunning soundtrack filled with ‘70s classics from David Bowie’s “Life on Mars?” to Paul McCartney’s “Let Me Roll It.” The soundtrack reunites Anderson with frequent collaborator Jonny Greenwood of Radiohead, who composed the title suite. The costumes by two-time Academy Awards winner Mark Bridges capture the spirit of early 1970s California, and the rough-and-tumble world of Hollywood. Although this was Anderson’s second feature film as a cinematographer, the first being 2017’s “Phantom Thread,” the camerawork and shot framing were exemplary. Several shot sequences stuck out in particular, such as the tracking shot during the Teenage-Age Fair that utilized lens flairs, harkening back to Anderson’s other film set in the San Fernando Valley, “Punch-Drunk Love” (2002).

Anderson is noted for his long-tracking shots, and “Licorice Pizza” delivered on that front. During the 1973 oil crisis, Gary and his friends run up to drivers eagerly waiting to fill up their gas tanks. The shot follows the group down several blocks until they reach the gas station where cars fill up. It’s worth noting that “Licorice Pizza” was dedicated to the late Robert Downey Sr., director of counterculture classics like “Putney Swope” (1969) and “Greaser’s Palace” (1972), a key influence on Anderson.

After the screening, Durling returned to the stage and brought out Anderson, Haim and Murphy. Before beginning the interview, Anderson pointed toward the beauty of The Arlington Theater, which, if you’ve never been to, its interior contains faux-Spanish villas and a ceiling filled with twinkling stars; “We don’t have many of these left. I get choked up.” Durling’s first question directed at Anderson was about the script structure, which he noted was looser than his other films. Responding to the question, Anderson noted, “An audience wants to be taken through something with purpose.” 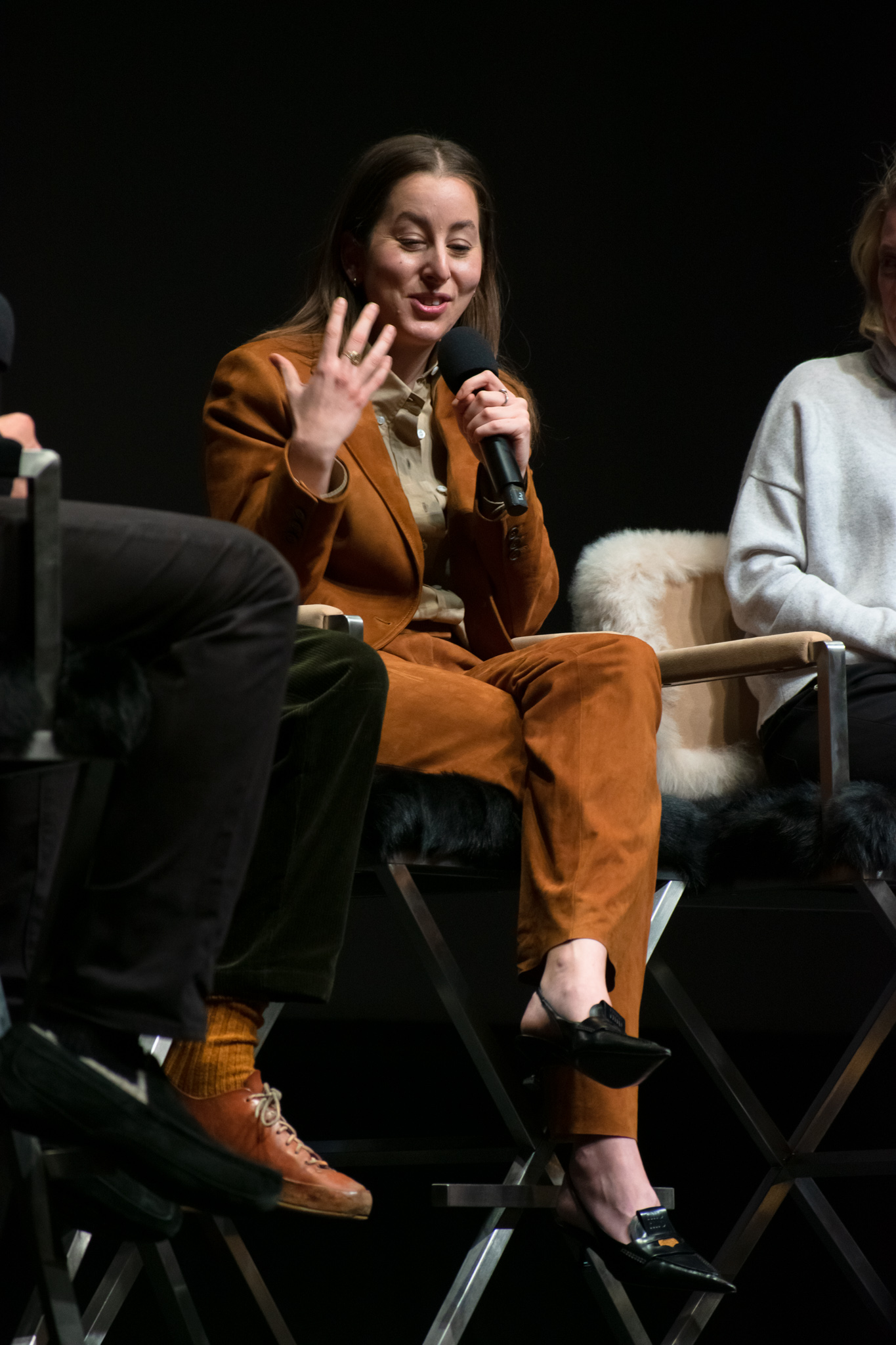 Next, Durling asked Haim what it was like being a first-time actress in one of Anderson’s films. “I never thought I’d be sitting here talking about this film. It’s crazy that I was in this movie,” Haim admitted. Echoing the sentiment of the previous question, Durling asked Murphy what it was like producing a film with two new actors, Haim and Hoffman. “It felt right,” Murphy said. Asked about the infamous circumcision line in the film, Haim responded that “funny enough, that was not scripted.” Haim elaborated that the line was improvised on set and that she “never told anybody what I [she] was going to say.” She noted that co-star Skyler Gisondo’s reaction to the line was genuine.

Durling then asked Murphy what the challenges of making a film during the peak of the COVID-19 pandemic were, with “Licorice Pizza” being one of the first films to begin shooting during the pandemic. Before the film went into production, Murphy admitted there were many people who were skeptical of this being made at the time. Still, Murphy noted that it was a series of learning and adapting to meet the unique challenges of the pandemic. However, she pointed out the familial nature of the shoot. Anderson’s partner, actress and comedian Maya Rudolph, his children and many of his friends and family members acted in the film, as did Haim’s sisters Danielle and Este, and their parents. Asked about the closeness of the production, Anderson stated, “There’s no logic. It’s this natural extension of how we all live.” There were some benefits to shooting during COVID-19, he admitted, and that was the immersive nature of film production during a time when most people were secluded indoors and most businesses were shuttered. Haim was asked about driving a truck for the infamous truck sequence during which her character maneuvers a large vehicle down the steep hills of the Valley, with Gary and friends. “It was really terrifying,” Haim acknowledged about driving the truck herself in the scene. “She really drove that 5-ton truck,” Anderson added.

There was a question about the cinematography of the film, which Anderson responded by acknowledging the team effort that went into the cinematography, his collaboration with Michael Bauman, chief lighting technician on “Inherent Vice” (2014) and “The Master” (2012) and a group of gaffers and technicians.

“It’s a five-headed monster when it comes to cinematography. It’s a very socialist environment.”

Durling asked Anderson about the influence of George Lucas’ “American Graffiti” (1973) on “Licorice Pizza.” During the question, someone in the front row of the audience loudly “Woahed,” which Anderson addressed by saying, “You and I love ‘American Graffiti.’” He admitted to taking inspiration from the opening scene of “American Graffiti,” where one of the characters crashes a Vespa into a wall; this moment was unscripted but Lucas left it in the finished film. Anderson used this scene to inspire the young actors to stay committed to the role, even during moments that were not scripted.

Finally, Durling asked Murphy how it felt to be nominated for an Oscar.