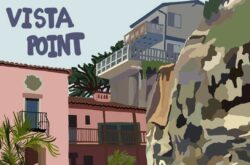 UC Santa Barbara’s Transfer Student Center is hosting a Social Game Night on March 3 at 4 p.m. Students are required to register on Shoreline prior to the event.

The Department of History of Art & Architecture Hosts “From the Margins to the Seder Table: A Dead but Eloquent Peacock in the Mocatta Haggadah” Lecture

The UCSB Department of History of Art & Architecture is hosting Julie Harris, a specialist in the art of medieval Iberia, for a lecture called, “From the Margins to the Seder Table: A Dead but Eloquent Peacock in the Mocatta Haggadah” on March 3 at 4 p.m. The lecture is part of the department’s 2021-22 Lecture Series: Underground Knowledge.

“The idea that illuminations in medieval Haggadot were designed to entertain and educate the women and children attending the Passover Seder entered the art historical literature almost from the beginning,” the Shoreline description stated. “This explanation, although entirely reasonable, has tended to limit our interpretation of imagery in these Haggadot, favoring a scenario in which it is keyed to a single level of literacy instead of being polyvalent, flexible, and sophisticated.”

Harris counters this idea by proposing that, by liberating Peacock “from its customary role as marginalia,” the new idea “permits it to enliven the Passover Seder by communicating to participants of varying levels of religious, Hebrew, and visual literacy.”

UCSB’s Health & Wellness moved its office to the first floor of the Student Resource Building and is celebrating its relocation with a soft opening on March 3 from 11 a.m. to 4 p.m.

The Global Studies Department is hosting Zaynab El Bernoussi — a professor of international politics  — for a lecture titled “Dignity, Democracy and Development: Toward a new Index” on March 3 at 12:30 p.m. over Zoom.

“Measurable themes in global South contexts include poverty, governance, human rights and security, but non-material demands such as dignity and recognition have also increased in the global South,” the Shoreline description stated.

“Dignity as a theme is often studied in bioethics and philosophy, and though it has increasingly caught attention in political studies … there is still need for more discussion of dignity as a powerful social and personal dimension, particularly in relation to the political economy of communities.”

The lecture is part of the Global Studies Department’s Colloquium Lecture series, which “strives to open and explore a wide range of interdisciplinary debates and their interaction and engagement with the glob[e], hosting new guest speakers each quarter from UCSB and beyond,” according to the Shoreline description.

UCSB’s Dance Company will be opening its dance season with a performance entitled “REBOUND” on March 3 and 4 at the UCSB Ballet Studio Theater. Artistic Director Delila Moseley invited “a diverse group of choreographers to create or re-stage works on the company,” according to the Shoreline description.

Magic Lantern Films is hosting a double feature of “A Night at the Opera” and “The Magic Flute” in March 4 at I.V. Theater.

“It is sure to be a fun night with beautiful music, and will truly feel like a blast to the past! Both movies are critically-acclaimed, top tier films, and are sure to be a big hit. Be sure to get there early to buy your tickets before seats run out. Be sure to bring your green badge or proof of vaccination and a face mask as well,” Magic Lantern wrote in a statement to the Nexus.

A UCSB improv group, Improvability, will be performing at 8 p.m. on March 4 at Embarcadero Hall. The group performs every Friday for the campus community.

“Experience the humor that has made them such a longstanding Isla Vista tradition! For just $3, watch as they perform hilarious scenes and stories right before your very eyes, while making absolutely everything up on the spot,” the Shoreline description stated.