The Daily Nexus
News
Senate Passes Bill Formalizing a Process To Address Internal Bullying
March 4, 2022 at 10:30 am by Asumi Shuda

In an effort to address the history of harassment and bullying within UC Santa Barbara’s Associated Students community, On-Campus Senator Jessy Gonzalez authored and introduced a bill to form a Conduct and Ethics Committee within the Office of the Student Advocate General on Feb. 23.

The bill was passed by the Senate on March 2. 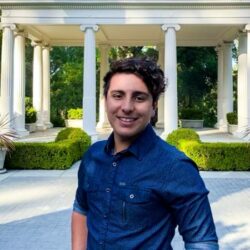 A previous version of the bill was slated for Fall Quarter 2021 but was tabled indefinitely. Courtesy of Associated Students

A previous version of the bill was slated for Fall Quarter 2021 but was tabled indefinitely and is now being reintroduced on the Senate floor — seconded by Off-Campus Senator Alex Liebetrau — to amend the Office of the Student Advocate (OSA) General’s Legal Code to create the new committee.

Student Advocate General (SAG) and student sponsor of the bill Geovany Lucero said the bill came from a place of fear and worry for students from Associated Students (A.S.) being targeted and harassed by other students within A.S.

“I still had a lot of fear of students from A.S. targeting myself or targeting other members of A.S. for their involvement,” they said. “We’ve heard, especially in recent years, very serious allegations against members elected or appointed [in A.S.], and I really was trying to make sure that there was some measure put in place as a precedent.”

Previously, A.S.. didn’t have a measure in place to address incidents that constitute bullying or harassment – including harmful actions or use of language that is racist, anti-Black, homophobic or antisemitic.

Now, the addition of the Conduct and Ethics Committee to the OSA office will create a committee of six nonpartisan members to “respond promptly to reports of abusive conduct/bullying, while giving such reports the serious attention they warrant to stop, prevent, correct and appropriately discipline behavior” that constitutes harassment or bullying, according to the bill legislation.

“I just want to emphasize the fact that this is one small step of a long journey to hold the association accountable, to acknowledge the mistakes that this association has made in the past,” Lucero said. “I’m not afraid to acknowledge the racism, the anti-Blackness, the homophobia, the antisemitism and the systems of oppression and hatred that are taking place in the association that have allowed students to maintain positions of power despite harm being done.”

Gonzalez said this critical shortcoming in A.S. procedure presented a need for the bill, which establishes an avenue through which such incidents can be formally addressed.

Gonzalez also said that the absence of a process for students to report instances of harassment and bullying caused some individuals to “internalize” what they’ve been through.

“The really messed up part about it was most people were internalizing a lot of these things, and I just felt like that shouldn’t be something that should be normal,” he said. “So they ignored it and let it pass by, so these things happened but it just goes unreported and doesn’t get the attention they deserve.”

In an effort to combat these instances of harassment and harm amongst A.S. students, Lucero said they used their nonpartisan platform to create accountability for such behavior.

“I wanted to implement a neutral, nonpartisan form of accountability to keep continuing our advocacy efforts as a part of the [Office of the Student Advocate] but also through the entire association,” they said. “This is something that I think is very instrumental, especially if we want to keep moving forward with our association.”

Lucero acknowledged that A.S. has historically had instances of harm done between students.

“What I wanted to make sure [with this policy] was to keep transparency among whatever conflicts are going on between A.S. members and making sure that that was handled and addressed to the appropriate entity,” Lucero continued.

In speaking to these instances of harm, Lucero focused on the anti-Blackness that has been present throughout A.S. history.

“I think our Internal Vice President Bee Schaefer has done an incredible job this year in addressing anti-Blackness within the association, and I do believe that that is one of the core forms of harassment and bullying that I have seen take place within Associated Students,” they said.

“There’s a lot of times where Black students [and] Black leaders often try to voice their concerns … and get attacked for it,” Lucero continued. “They get attacked because they’re not being taken seriously, and that accumulation of dismissiveness, or ignoring and targeting [Black student leaders], creates a lot of harm.”

Gonzalez spoke to his personal encounters with harm and violence within A.S., saying that he received hateful direct messages (DMs) on social media from A.S. affiliated students for his actions as a senator.

Overall, Lucero emphasized that this bill is one aspect of a broader effort to hold A.S. accountable for its past and present actions regarding bullying and harassment.