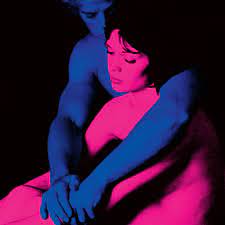 TV Girl, the San Diego-based band most popular for its vast array of synth-pop music, released their second studio album “Who Really Cares” on Feb. 25, 2016. Six years later, the listening experience is an exuberant one and the project is packed with energy from beginning to end; almost all of the tracks are under four minutes long and the lyrics seem to freely pass by as the techno melodies fade in and out. The album is entirely about sex — specifically its physical and emotional lasting effects.

The opening track “Taking What’s Not Yours” discusses the act of leaving behind personal items at your partner’s home to create a lasting impression, one your partner can’t physically ignore even if the relationship has ended. Lead singer Brad Petering sings, “All I know is she left a lot of / Stuff in my apartment / She’s never getting back / And as her smell on my pillow fades.” Waking up without the face of a sleepy lover next to you is a painful reminder of love that once was. Petering then goes on to sing, “[S]he’s wearing down my rings / Taking the compliments meant for me / And although I think I’ll miss them / At least there’s proof of my existence.” Is the most painful part about a relationship ending the tiny reminders of them that pop up in our daily lives?

The next track, “Song About Me,” reveals an argument between the singer and his ex — the argument at the core of the album. The relationship’s poor ending becomes extremely apparent near the middle of this track, as Petering sings, “And I remember her bent over / And knowing that it was the last time / You know the end is near / If she only lets you fuck at night.” Perhaps the only saving grace of the relationship was the sex, but even that wasn’t going well. The following track, “Cigarettes out the Window,” is easily one of the most instrumentally pleasing tracks off the album. At the end of this track, TV Girl features dialogue from the 1937 film “Dangerously Yours”: “You’ll find moonlit nights strangely empty because when you call / my name through them there’ll be no answer / Rather melodramatic, aren’t you?”

“Till You Tell Me to Leave” is the perfect precursor to the album’s fifth track “Not Allowed,” undoubtedly the most popular song off the whole album. In “Till You Tell Me to Leave,” Petering sings, “So I’m just gonna sit here and stare at your lips / I won’t read it in your face / I won’t take any hints.” The emotionally turbulent relationship that Petering was in has left him feeling misguided. He did everything that his girl told him to do, giving up all of his control and willpower. In “Not Allowed,” Petering builds on this with lines, such as, “You don’t know how long I could stare into your picture / And wish that it was me / I guess it’s different ’cause you love him” and “Do you like these little sonnets? / ’Cause I wrote them just for you / But how quickly they turn sour.” He regrets the relationship and can’t help but release his anger in this track.

The following track, “(Do The) Act Like You Never Met Me,” unveils the pain that Petering feels after the relationship. He wishes that there could have been hope, that his partner would have stayed in his life one way or another, even platonically. Yet, now she acts like she has never even met him. He sings, “Remember those times when you were laughing / Naked on my couch / Pretend it never happened / Politely smile as we turn around.” Then comes “Safeword,” a song with an overtly sexual title that reveals rather disturbing information about the former relationship. Petering sings many times throughout the track, “Remember your safeword,” perhaps something he wants her to remember even after their relationship has fully faded away.

The eighth track on the album, “For You,” is a declaration of one-sided love. Petering sings, “And I wasted all my favorite melodies (for you) / And watched best friends turn to enemies (for you).” He has given up all of himself for this girl who gives him nothing back. He leaves “lipstick stains upon [her] shoes” and feels like even being naked and vulnerable with her doesn’t make them any ounce closer.

The penultimate track, “Loving Machine,” is easily my favorite song off of “Who Really Cares.” I’ve always interpreted this song as one that’s about a girl who uses a vibrator to more or less fulfill her romantic and emotional inadequacies. Her past lover knows about her use of sex toys to fulfill her desires and feels a sense of frustration about this. Petering sings, “Will he ever smack her ass like she likes? / Will he ever make her laugh late at night? / No, but he’ll never leave.” Is it fair for the man to be envious of the pleasure that she derives from something that is not him? Or is that not fair in the slightest, possibly indicating that he feels emasculated by this sort of “replacement”?

The concluding track, “Heaven Is a Bedroom,” tells the all-too-familiar story of mistaking sex for intimacy or emotional connection — when in reality it is a mindless act for many. My favorite set of lyrics from this album comes from this track: “I confess to thinking sex was my salvation / But really they just start with the letter ‘S’ / You’ll forgive me for thinking heaven was her bedroom / It’s as close as I would ever get / As close as I would ever get.”