Student workers rallied on Friday afternoon to raise awareness about affordable housing — the defining issue of the union United Auto Workers 2865 — as the union renegotiates its contract with the University of California. 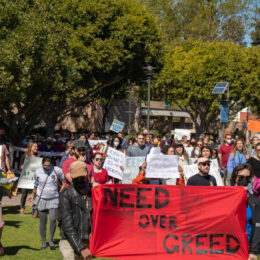 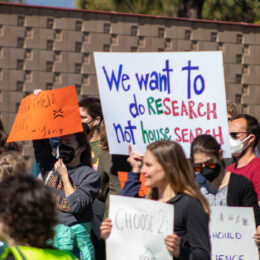 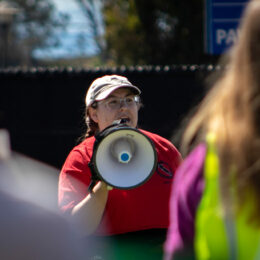 United Auto Workers 2865 (UAW 2865) represents over 19,000 student employees, teaching assistants (TAs), graduate students and various employees across the University of California system. As it entered contract negotiations with the UC, the union planned rallies across all UC campuses to raise awareness for their cause. The eighth of these rallies took place at UC Santa Barbara on Feb. 25, when dozens of students and TAs gathered with signs and chalk.

Starting at the UCSB Chemistry Lawn, rally goers marched through campus chanting, “What do we want? Housing! When do we want it? Now!” The crowd eventually arrived at the home of Chancellor Henry T. Yang, pausing to listen to guest speakers before chalking the road with phrases, including, “Where’s my money Daddy Yang” and “We pay your rent, pay for ours!” One supporter wrote “Bitch A$$ MF” on the fence that surrounds Yang’s home.

Fifth-year physics doctoral student Joseph Costello, who helped host the rally, spoke to the frustration that student workers feel in their search for housing.

“Let’s not forget that the university continues to admit more and more people every year and continues to pay fines to the city of Goleta for not building enough housing. And their best idea is to have students crash on professors’ couches or just violate human rights by building a little prison box,” he said, in reference to the proposed Munger Hall.

Fourth-year history doctoral student Emma John described to the crowd the shortcomings of the university and the goals of the union’s fight.

“I’m exhausted,” John said. “The UC has abdicated its responsibility to graduate students like you and me. We have to be proactive in our solidarity, in our contract negotiations, and make sure that we have secured safe and affordable housing, and make sure that housing has windows.”

“I want to start off by saying that I was homeless at the beginning of the school year, and it’s completely the fault of the university. I am currently in permanent housing, I pay an exorbitant amount of rent, I work two jobs for the University. All of my rent money –  100% of my paycheck – goes towards paying rent every month,” they said.

“I was lucky enough to have people who support me outside of this, but the university has done nothing to show any student here that they are willing to support us,” Bahamonde-Partlan said.

“Last quarter, I was homeless and living in my car. Landlords around here don’t want to rent to someone like me. They want to rent to someone who makes three times rent, and I didn’t even make twice that,” she said. “I went to UCSB housing, and I said, ‘This is my situation, what do I do?’ Their response to me was essentially, ‘Well have you tried just not being homeless?’”

“We live in fucking California, with the highest housing prices in these United States. Our friend over here [Chancellor Yang], this bitch ass fucking coward, just got a 28% raise. My rent is $1,150 a month, I am 43% rent-burdened,” she said. “We’ve been hearing stories from a lot of individuals who have suffered unimaginably because the place that they go to school and work does not give a shit about them.”

Union organizer Brian Dincau lauded the rally’s success — citing it as being for all UC employees and stating that most face some form of rent or housing insecurity.

“This is actually really positive,” Dincau said. “I think the turnout was honestly bigger than expected, and I’ve talked with a bunch of people throughout this whole thing just to find that almost every single person here has faced housing insecurity at some point, or has helped a friend that was facing housing insecurity.

Dincau declined to give details on the bargaining process as the union and university are still in the early stages of discussing a new contract. He stated that specific demands would be hashed out with their bargaining team and with the university over the next few months.

“We actually are trying to represent all UC employees today, just because most UC employees do face some form of rent or housing insecurity,” he said. “I don’t think the fight is just gonna end; I think they mean it when they say we will be back.”

The UC Regents are disgusting. Here is a quote from one of them last month regarding Chancellor’s raises, ““To me, this was an issue of pay equity,” Regent Jonathan Sures said in the Jan. 19 Governance committee. “We have an obligation to pay our people well and we should pay our chancellors well.”” The rich give to the rich and could care less if students or staff do not get paid a living wage, in order to find a place to live.

I feel like there is some, or perhaps a lot of, misdirected anger here. Is Yang really the best person to be fighting against? Why not get him to fight with us instead? Violent words are not the answer. There has to be a better way. But I will say, at least, this is a start. Hoping it gets better for everyone.