The Daily Nexus
Sign of the Times
Why Social Security Needs to be Saved
February 20, 2022 at 9:13 am by Vijay Homan 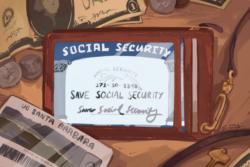 I want you to imagine a United States ravaged by poverty. The unemployment rate is above 25%, leaving two million people homeless. Jobs are harder to come by than ever, and regardless of the policy that the government passes, the economy keeps shrinking. People are losing their homes and farms, all while a relentless drought is plaguing the Great Plains states. The “American Dream,” which once meant freedom and prosperity for so many people, is now crumbling.

This was, of course, the Great Depression, which began with the stock market crashing on Black Tuesday in 1929 and saw the American and worldwide economies regress rapidly. After four long years of people crying for help during the Hoover administration (1929-1933), they finally got it in the form of a new president, Franklin Delano Roosevelt. He promised to enact new policies that would revitalize the economy, which were bundled up and called the New Deal. This encompassed monetary and banking reform, public works projects and social security. The latter was not a revolutionary concept by international standards, but it gave hope to the American people that better things would come yet.

The concept was fairly simple: Those who were currently working would pay a tax that would fund monthly payments to people at or over the standard retirement age, which at its inception was 65. Workers who had become disabled or blind were also eligible to collect social security checks. It was originally meant to help alleviate some of the financial pressure felt by retirees in the 1930s but has remained intact to this day.

As you might know already, social security is dying. By 2035, the program will have depleted its reserves. Without intervention, the system will default to reducing the amount that each recipient is paid. And yet, no one in political power is addressing the issue.

Nowadays, social security is a widely available program to citizens and non-citizens. For non-citizens, access to social security is contingent upon the fact that they work in the U.S. and pay into the social security program as a worker. Social security is one of the primary sources of income for people over age 65, especially for African Americans and Hispanics. According to a 1999 study done by the Social Security Administration, one in three minorities, ages 65 and over, rely on social security for their entire income, while only 16% of white people rely on it the same amount. At each rung of the socioeconomic ladder, minorities count on the payments more than white people. It’s clear that people (especially minorities) depend heavily on this program, and right now, our politicians are just watching it die.

Up until 2010, the program worked as initially intended. The fact that the country was growing at such a rapid rate made it so that there was extra money brought in by the workers, which was put into reserves. Although there were slight changes during the ‘70s and ‘80s that allowed for the long-term stability of the program, the reserves piled up. Yet, over time, population growth decreased. The first year that the program ran on a budget deficit and needed to use up some of the money from the reserves was 2010. Every year since, the reserves have been dwindling. As the gigantic boomer generation settles into retirement, the number of people cashing social security checks is greater than ever.

As their website states, social security is the “major source of income for most of the elderly.” About 65 million Americans cash a social security check each month, which costs about $1 trillion annually for the taxpayers. This is no small amount of money and it will only increase as the years go on. See, the thing is, while there is a minimum age requirement for one to start receiving social security checks, once they have begun receiving them, they continue to do so until their death. As modern medicine has emerged and helped people live longer lives, the viability of social security has wavered.

In the 85+ years since its inception, the social security program has only changed its standard retirement age by two years, from 65 to 67. It’s no wonder that the system is running out of money; it went from the average person dying before they could collect benefits to the average person collecting benefits for 12 years.

However, the solution is not as simple as raising the age at which eligible members can begin collecting their checks. People depend on this money for necessities like healthcare, and taking it away from them for a couple of years simply isn’t an option.

In the interim, the U.S. needs to do damage control. One way to prop up the program until a long-term policy can take effect would be to increase or remove the cap on income taxed by social security. As of 2021, the maximum amount of taxable income is $142,800, which means that any income earned over that amount is not subject to the 6.2% tax. Raising or removing this cap would be an easy way to tax the rich and have the money be redistributed to retirees who desperately need it.

There’s no doubt in my mind that social security will be fixed, because politicians don’t really have a choice. Yet, in my opinion, people aren’t talking about this issue enough. If the implosion of the system is at least 10 years away, we should make changes now so that they have time to work their course. The last thing the government needs is to be dealing with this issue at the last minute and risk putting the income of the elderly in jeopardy.

Vijay Homan believes that social security should be changed to tax the rich more, in order to give time for a long-term policy to allow the increase of the standard retirement age.