The Daily Nexus
News
UCSB Tennis Shows Their Quality on the Court
February 17, 2022 at 1:28 pm by Garret Harcourt

The month of February started off with a tough draw for the UC Santa Barbara women’s tennis team, as they fell to a tough UCLA team by a score of 4-0. 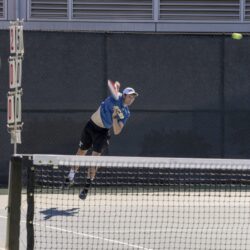 In the matches, UCLA won by large margins against all UCSB opponents, with the exception of UCSB’s freshman Filippa Bruu-Syversen. In her match, Bruu-Syversen won in straight sets by a score of 6-3 in the first set and 4-3 in the second set.

In the Gaucho women’s next match, they took a commanding 6-1 victory over the University of San Francisco. The first doubles match was won with a score of 6-2 by UCSB senior Shakhnoza Khatamova and graduate Elizaveta Volodko, and the other doubles victory came by a score of 7-5 with UCSB freshman Amelia Honer and junior Kira Reuter being the victorious pairing.

Many UCSB women’s players came out victorious in their singles matches, but none were more dominant than sophomore Camille Kiss, who won in straight sets, not dropping a game in each set and winning by 6-0 and 6-0.

As for the UCSB men’s tennis team, they started out in February with back-to-back victories.

Their first victory was against the University of Texas at San Antonio by a score of 6-1. The Gaucho duo of sophomore Phillip Jordan and sophomore Kai Brady managed to pull off a 6-0 victory, while UCSB freshman Gianluca Brunkow and sophomore Pablo Masjuan managed a narrow 7-6 victory with a 7-2 win in the tiebreak.

As for the singles, many of the Gauchos took victories, but the most impressive came from Brunkow who managed to win in straight sets, while only dropping 4 games within the 2 sets.

The Gauchos’ following match was against Pacific in which they had one of their most complete performances en route to a 7-0 victory. In this series, the Gauchos managed to win every single one of their matches with only 1 match losing 1 set to Pacific. In the doubles matches, the Gaucho partners managed to lose just 7 games across 3 matches in their sweep of Pacific.

In the following match versus San Diego State University, the Gauchos stayed hot by winning the match 4-2 behind equally strong doubles and singles performances. Brunkow and Brady stayed hot, winning their doubles matches and winning their singles matches in straight sets.

Their most recent match came against a talented University of San Diego team that pulled off the lopsided 6-1 match victory. There were only 2 wins on the Gauchos’ side, one from the duo of Brady and Jordan, then one from Brunkow in the singles match. Jordan lost one of his first singles matches to the talented August Holmgren, who is currently ranked No. 7 in the nation.

Altogether, each UCSB tennis squad will look to continue their recent wins as they head closer to their league matches and play more non-conference opponents.