The Daily Nexus
Sign of the Times
The Effects of Systemic Anti-Blackness in Healthcare
February 17, 2022 at 9:15 am by Toni Shindler-Ruberg and Emily Kocis 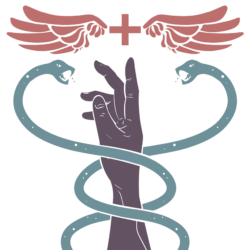 It’s no secret that the American health care system is, in the simplest terms, screwed up.

With private insurance costing an annual average of $5,000 per person, hospital visits that cost an average of $11,700 (or nearly $3,000 per night) and medication costs that soar four times higher than in equivalent countries, unequal access to and treatment in the United States health care system is further complicated by gender, racial stereotypes and discrimination.

As two young women, we’ve faced our share of unsympathetic doctors that want nothing more than to move on to their next patient and the all-too-familiar: “So, maybe this [excruciating pain] is just because you’re on your period … ” These dismissals are even more prevalent and common for Black patients and Black women of color.

However, as women who are not part of the Black community, we’ll never fully understand the experiences of Black medical professionals and patients, as their experiences within the health care system are further compounded by systemic racial discrimination. We are not trying to speak for the Black community but rather acknowledge and discuss the multitude of other factors that disproportionately affect Black patients — serious issues that need more discussion and examination at a far more nuanced level than what a single article can cover.

It took seven years for Arista Ware II to finally get diagnosed with systemic lupus erythematosus, an autoimmune disease that was causing her body to attack itself. Pregnant with her first child, Adrienne Hibbert found herself unable to find a single photo of a Black woman and child in her white obstetrician’s office. At large, Black women continuously face widespread exclusion and dismissal from the American medical system.

Norma Poll-Hunter from the Association of American Medical Colleges references “research that shows, across all races, patients are more likely to report satisfaction with their care when their doctors look like them. But only 5% of the country’s doctors are Black.”

On the research and development side of the medical industry, Black women are underrepresented in studies, and research on health conditions that disproportionately affect Black women are given very little federal funding.

Diversifying visual representation in medical literature and training extends beyond inclusivity. This diversification can save lives. The indirect and direct exclusion of diversity within health care, whether at an individual or systemic level, can kill.

What does this mean for the health of Black women in our country today?

While it might be easy to think of these factors at a conceptual level, the reality is that they manifest in a myriad of specific ways that directly and continuously impact the health — and lives — of Black women.

Research by a Harvard University professor of social epidemiology, Nancy Krieger, has found that early life exposure to Jim Crow laws has a direct correlation with an increased presence of breast cancer in Black women decades later. Today, Black women are less likely to be diagnosed with breast cancer but more likely to die from it at a rate 40% higher than that of white women.

Intergenerational trauma also has enormous effects on mental and physical well-being as generations of racist experiences manifest as chronic stress. Indeed, studies show that the inflammatory response triggered by toxic stress is the same inflammation causing chronic conditions like hypertension and dementia — all of which Black women are at a higher risk of having or dying from. The lived experience of violence, as well as videos depicting violence, toward Black people can directly cause stress, anxiety and post-traumatic symptoms in Black viewers. However, due to distrust of the health care system and general lack of access, Black women are half as likely to seek mental health treatment as white women are, often due to systemic disregard.

Stereotypes that paint Black women as stronger than white women, and therefore more resilient to comparable pain, directly impact the degree of seriousness to which they are given proper medical care. In the words of Dr. Kiarra King, an OB-GYN, “There have been studies that have revealed that medical students and doctors believe Black people have a higher pain tolerance than non-Black people, which has over time led to them thinking Black people presenting with pain were drug-seeking.”

This stereotype is deeply ingrained in medical practice — rooted in the early experimentation of James Marion Sims. Sims, widely regarded as the father of gynecology, grew much of his research from forced experimentation on enslaved Black women without pain medication. This flawed idea that Black people feel less pain is at the very root of the development of women’s health care and persists today.

It follows then, that Black people are 22% less likely to be prescribed pain medications compared to white people and Black women are three times more likely than white women to die from preventable birth-related complications, holding true across all socioeconomic statuses.

These disturbing statistics are the direct result of a medical practice and system in America that perpetuates deeply racist myths of the “thicker skins” of Black Americans.

Again, the issue of Black health and wellness, in regards to the health care industry, is far more complex than what can be covered in a single article. We are presenting these issues as our contribution to what needs to become a larger, universal conversation. Fortunately, conversations are being started, and Black pioneers and advocates continue to change the future of American health care.

Leaders like Patricia Bath, the first Black physician to complete an ophthalmology residency; Beverly Malone, current CEO of the National League of Nursing and the first Black general secretary of the Royal College of Nursing; and Kizzmekia Corbett, a scientist at the forefront of the COVID-19 vaccine development, continue legacies and inspire new generations of change. Illustrator Chidiebere Ibe was the visionary behind the viral illustration of a Black mother and her fetus that circulated social media in December 2021. The number of first-year Black medical students has increased 21% over the past year — a never-before-seen leap. Organizations like California Black Women’s Health Project and the UC Santa Barbara Black Women’s Health Collaborative provide representation, education and tools for empowerment and advocacy for the Black community. Health and wellness, while basic and necessary conditions for life, are not guaranteed or equally provided for all in America. Indeed, Black patients often have their complaints and symptoms frequently dismissed by medical professionals harboring overt or unconscious bias. This is a burden often borne the most by Black women, who face the unique intersection of gendered and racial discrimination in the American medical practice. While trust in the medical system may be understandably shaky, future generations of Black medical professionals invite a hopeful next step in diversifying medical practices and building a more equitable health care system.

Emily Kocis and Toni Shindler-Ruberg encourage you to check out organizations like the Association of Black Women Physicians for more information and to see the work groups are doing to diversify and improve the health care system.