Before they were a couple, Sabine McHugh and her boyfriend Raf Parekh got to know each other as dancing partners. 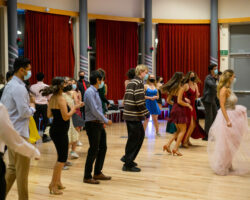 The two met while dancing bachata, which is a Latin American dance originating from the Dominican Republic that McHugh has practiced for four years. She became captain of the UC Santa Barbara SBKlub Performance Team — the branch of the club that practices and performs salsa and bachata competitively — in 2019. Parekh joined the club in 2020, the year he would also graduate from UCSB.

Two years later, the couple stood in front of 62 individuals at the SBKlub Valentine’s Day Prom to teach and celebrate what brought them together in the first place: dancing.

“Dancing bachata with the person you love is the best feeling in the world, and I am so grateful I got to spend prom teaching and dancing with him,” McHugh said.

As one of the main organizers of the Valentine’s Day Prom, McHugh came up with the theme of the event and taught the bachata lesson to those in attendance.

“The mission of our club is to provide a welcoming environment and to spread the joy of dance,” McHugh said. “Our prom event was a great way to make students feel welcomed and excited to learn how to dance.”

Antonio Lorenzana, a fourth-year economics and accounting major and the president of SBKlub — which is a student organization that teaches community members the dances salsa, bachata and kizomba said that the most special aspect of the event was its ability to give attendees back a prom experience they lost due to the pandemic.

“A lot of people, including some officers on the board, didn’t really get a prom experience,” Lorenzana said. “Them, as well as a lot of the first-years and even the second-years who are still trying to find themselves on campus — meeting new people and experiencing new things — got a second chance to have an experience that they didn’t get in high school.”

The organizers decorated the Multipurpose Room of the Student Resource Building with flowers and fairy lights, complete with an area for professional photos and another for snacks. Lorenzana said that many had their families ship their prom dresses from home to wear to the prom. Attendees also wore corsages and boutonnieres that were made and distributed by officers of the organizations.

“I remember walking around seeing guys wrapping their corsages around their date’s wrist, or someone presenting the boutonniere to someone and pinning it on,” Lorenzana said. “I thought that was really cute. I got a surprise boutonniere myself.”

As well as the introductory bachata lesson conducted by McHugh, the organizers also held a game of musical chairs to crown the prom king and queen. Guests each got a turn to dance with the victors, who donned their crowns on the dance floor.

McHugh said that the moment she shared with Parekh on the dance floor was reminiscent of the first time they met.

“[It] was such an amazing full-circle moment to see how far we have come together, as dancers and as people,” McHugh said. “When [Parekh] walked into the lesson [two years ago], I immediately went over to pretend to help with check-in so that I could have an excuse to meet him.”

The next day, Parekh attended tryouts – even though he had no experience with salsa – and made the team.

From that point on, the two would bike home from practice, grab food and hang out together. McHugh said that even though she asked him to do extra practice with her, and despite all the time they spent together, Parekh still didn’t know she had feelings for him.

“Finally, someone had to tell him, ‘Dude, you’re the worst guy on the team,’” McHugh said. “‘If she wants to practice with you, then she definitely likes you!’”

McHugh said that Parekh then began to build the confidence to ask her out. He planned to ask her as his date to the Valentine’s Day event hosted by SBKlub in 2020, but he ultimately didn’t follow through with it because he was nervous.

But on the night of the event, Parekh surprised McHugh with flowers, wine and a card — marking the first night that McHugh said she was sure he liked her.

“[We’ve been] together pretty much ever since that night,” McHugh said. “Two years later, we are still together and even more in love than when we first met.”

Lorenzana said that the successful organization of the event solidified the importance of the organization and what it stands for.

“We brought our own speakers, hung some streamers, nothing super crazy.” Lorenzana said. “You don’t have to hire a world-class DJ. You can still have a great experience for people just by giving a dance lesson.”