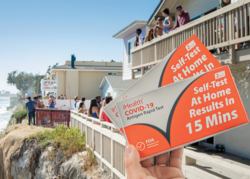 Isla Vista, California – In a scramble to get tested before the return of in-person classes, local trap houses are struggling to acquire tests due to the fact that walking five minutes to Loma Pelona is considered “too far.” With drop-off tests being out of the question, this has left no option but for trap house tenants to share the four free COVID-19 tests issued earlier by the government. The 15-member houses face a difficult decision on splitting the tests because their friends won’t sell their rapid tests to them.

When asked how sharing tests could possibly be done, local trap house tenant Ben Derhover said, “The situation ain’t P, that’s for sure. But what my homies and I have come up with is to do a fistfight bracket tournament-style where the winner gets one of the four tests and everyone is invited to watch. It’s gonna be like a COVID-19 test Fight Club.” Derhover then sneezed while wearing a mask that only covered his mouth and denied the legality of the proposed plan. Fellow housemate Dill Doe, who looked severely under the weather, stated that more likely than not, they will end up selling the tests to freshmen for two to three times the current market price in order to afford alcohol for Thirsty Thursday.

With anticipation coming to a peak, keep your eyes peeled and your mouths and noses covered these coming days as your local trap houses plan a treat that is far more contagiously exciting than the Chlamydia you are used to! Be ready to catch a glimpse of your favorite trap house tenants fighting for their right to get tested. Prepare yourself to see guys punching the air more than usual mixed with the occasional loud grunt (not to be confused for a dry cough). Otherwise, it will be safe to assume that Thursday will be a good day to go out.

Until then, tenants and students will continue to go to public places and prepare to go to school by clicking “No” for every question on their daily screening surveys because lying will always be easier than actually doing something.

Julia Makarov will be standing six feet away from everyone until further notice.