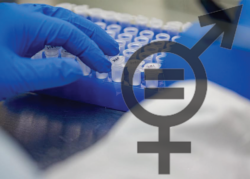 Last week, an email was sent out to the UCSB student body mandating booster shots and a COVID test administered between the dates Jan. 3 and Feb. 2. While most students accepted the logic of these rules thanks to yet another COVID variant, some of our school’s Republicans had a bone to pick with the gender-neutral COVID tests being used at the Loma Pelona testing center.

“This is outrageous. Yet another transgression from the social Left,” said fourth-year spokesperson for UCSB Republicans, Kancelle Mi. According to Mi, the group believes that students should be required to use anatomically correct COVID tests instead of participating in a “communist utopian fantasy” that “distorts scientific reality.” When asked to elaborate on how gender could affect a saliva test, Mi replied that “gender is the same as sex, and men and women are different, with different sex bodies. Sex-speaking,” Mi added, as an afterthought.

We reached out to the Biology Undergraduate Program here at UCSB for further insight into this loaded statement through email. Their reply was a simple plea asking us to “fuck off.”

Though our school’s vocal minority remains in discussion on which course of action to take in protest (a leaked source revealed that option “attempt coup” is rising in popularity in the Google survey, alongside “tweet angrily”), most got the test administered before the due date “like sheeple being led to slaughter,” according to a third-year Republican who giddily insisted we nickname him Let’s Go Brandon.

“The truth is that far more men and women will be victimized using a gender-neutral COVID test than the number of nonbinary people who will feel good about it,” continued Brandon. “And if you can’t handle facing a little discomfort for the common good, you shouldn’t be at college.”

Although we had other questions, Brandon grew angry after our on-site reporter asked him to pull his mask over his nose and refused to provide further comment.