The Daily Nexus
Water Polo
Women’s Water Polo on Fire To Start the Season
February 8, 2022 at 12:52 pm by Garret Harcourt

The UC Santa Barbara’s women’s water polo team has endured great success to start the season, beginning with an opening win and continuing onto a 7-2 start to their season. 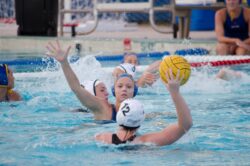 Their first game of the season came with a comfortable 19-7 win versus the University of Ottawa. In this match, the Gauchos got a 5-point game with 3 goals and 2 assists from RS junior attacker Sarah Owens and RS freshman attacker Nina Munson.

The following match was one of the two Gauchos’ losses to the San Jose State Spartans, in which they only managed 7 goals, with 3 coming from RS junior utility Caitlyn Snyder.

Once again, the Gauchos pulled off a one-point win against the Princeton Tigers, 15-14. Also, Lyter and Munson continued their hot stretch, each having 4 goals and 1 assist in this match.

Then, for the third straight game, the Gauchos managed a close victory, this time against the Brown Bears. This game was a close contest up until the end, ending in a double overtime victory goal from freshman utility Annie Kuester.

The next game was the Gauchos’ second loss of the young season. This was a battle of the University of California schools, with the matchup against UCLA. The Gauchos were beaten easily by a score of 21-8 but outshot the Bruins 35-31, so the final score did not reflect the overall play.

Against the Biola Eagles, the Gauchos managed an easy 13-7 victory while outshooting the Eagles by 12 shots.

The Gauchos followed up the victory by taking down the Eagles again, this time being the Concordia Eagles. In the 17-10 victory, UCSB capitalized on a 4-4 day with their penalty shots.

The No. 16 ranked team in the nation’s most recent game came against the Fresno Pacific Sunbirds, with a dominating victory. This was UCSB’s most complete performance winning 19-4 while finishing the game with a .559 shot percentage, shooting 4-7 from power plays and converting their only penalty shot.

The UCSB women’s team will look to continue their dominance at the Triton Invite beginning in the middle of February.