The Daily Nexus
Volleyball
After Disappointing Start to Season, UCSB Men’s Volleyball Wins 4 of 5
February 8, 2022 at 12:45 pm by Garret Harcourt

After a shaky start to their season, the UC Santa Barbara men’s volleyball team has seemed to turn the tables, winning 4 of their last 5 games. 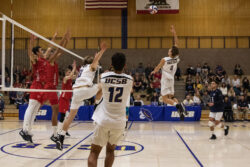 Their season started with back-to-back games against USC in which they dropped 3-2 then 3-1 the following day.

In the first match, UCSB won the first and third set easily, while losing the second and fourth sets by narrow margins — 3 and 2 points, respectively. However, in the last set, they were beaten soundly 15-8.

The following match with USC was more separated between the two. Although the Gauchos won the first set by 5 points, USC answered with a reverse sweep winning the game 3-1.

UCSB won the next match versus Saint Xavier in 3 sets while on the way to getting 38 kills as opposed to 25 kills.

The last loss of their recent stretch of games was at home to Princeton University. In this match, the Gauchos got off on the right foot, winning the first set. In the next set, they lost by 7 points, but the third set was a competitive battle going the way of Princeton 31-29. Then, they finished off the last set winning 25-13.

The Gauchos’ second consecutive win came with a sweep against Penn State, winning the first set by 12 points and the following 2 sets by a score of 25-21 in each set.

Overall, junior opposite Haotian Xia leads the Gauchos with 101.5 points and 81 kills through the first couple of games.

The Gauchos will look to continue their impressive win streak in a rematch versus Pepperdine on Feb. 4.