The Daily Nexus
Tennis
First Wins for Each Gaucho Tennis Team as They Open the Season
February 1, 2022 at 5:46 pm by Garret Harcourt

The month of January, which was supposed to be the opening matches of the season for the Gauchos’ men’s tennis team turned into a delayed opening as their first 2 matches of January got canceled. 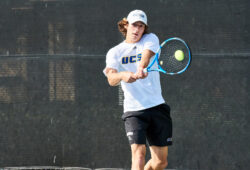 After a pause to the start of the season, the men’s team started off the season with a 5-2 win against the University of San Francisco.

On the other hand, the women’s team didn’t have to delay any games and took an opening 6-1 loss against Berkeley but responded a day later with a 4-0 sweep against Saint Mary’s (CA).

Against San Francisco, the men’s team opened with a dominant doubles match victory 6-1 from the duo of redshirt sophomore Philip Jordan and sophomore Kai Brady.

UC Santa Barbara continued with 2 close victories in the latter 2  doubles matches with a 1-point win from senior Stefano Tsorotiotis and senior Victor Krustev, then a 2-point win from freshman Gianluca Brunkow and sophomore Pablo Masjuan.

Brunkow also had a comfortable opening set winning 6-1 and then finished the sweep with a 7-5 set victory.

In the other 3 singles matches, they each ended in a tiebreak of the third set with the Gauchos winning just one of the tiebreakers from Krustev.

On the women’s side of the court, following their opening loss that they put in the past, they dominated the Saint Mary’s women.

Senior Shakhnoza Khatamova opened the singles with a 3-set victory, and Kiss followed the second match loss by winning in another 3-set victory.

Then, the 4-0 victory by UCSB was settled with an unfinished match victory in straight sets by freshman Priscila Janikian.

Overall, the tennis teams did well in their previous matches and will look to continue their hot streak this weekend.