On January 14, the UC Santa Barbara women’s track and field team opened the indoor season with an impressive start, clocking multiple personal records and a school record in the 200-meter sprint. 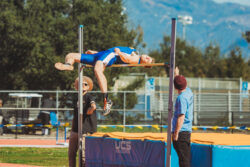 Due to balmy west coast weather, California does not have any indoor track facilities, so the Gauchos traveled across state lines to the Cougar Classic hosted by Washington State University. The UCSB indoor season overall consists of three travel meets along with indoor nationals.

While indoor track and field events look similar to their outdoor formats for jumps and most throws, there are a few critical changes. The hammer throw transforms into the weight throw, the 100-meter open and hurdles shorten to 60 meters, and the 400-meter track becomes only 200 meters. The harsh curve of a 200-meter track is banked to help athletes handle the force of the turn at great speeds. Visually, the warped, condensed oval appears daunting, yet the enclosed nature of indoor facilities allows cheers to echo and adrenaline to peak, making indoor track and field a unique experience.

The UCSB women had a strong showing with standouts in every event. Senior Gabby Sanchez threw a personal best in weight throw — 15.96 meters — placing her in second overall. Freshman Jessica Boyd placed third in the open 60 meters with an impressive time of 7.75 seconds, missing the school record by just 0.04 seconds.

However, the most monumental feat came from junior Mariana Lanz, whose 24.78-second 200-meter time earned her second place and a new UCSB indoor 200-meter record. Lanz’s race took 0.12 seconds off the previous record of 24.90 seconds, once held by Hailey Ray.

“The indoor 200 is my favorite event,” Lanz said. “I always feel so fast when I get to run down the bank.”

Lanz also had a strong season opener in the triple jump with a mark of 11.82 meters, scoring her second place. She later closed the night as part of the 4×400 relay, with a remarkable split time of 55.68 seconds.

Coaching at UCSB since 2019, Assistant Coach Josiah Norville has been an integral part of Lanz’s development. “I’m proud of her that she got to see her work to fruition,” Norville said of Lanz. “She’s had some setbacks over the last couple of years so it’s good to see her work pay off now.”

On Jan. 28, the UCSB women will head to the University of Washington to compete once again against dozens of competitive schools. With more school records in reach, anticipate another exciting meet for the Gauchos.