After a shaky start to the season with a 2-3 record, the Gauchos have managed to string together a 5-game win streak. During the streak, UC Santa Barbara has dominated their opponents, winning the games by no less than 8 points and beating Bethesda University by a score of 117-28. 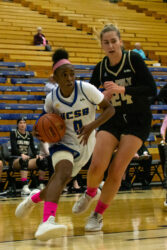 Their most recent win came against their rival Cal Poly San Luis Obispo in a blowout, winning by a margin of 21 points. Although the Gauchos are on this 5-game winning streak, it was put to a halt due to COVID-19 complications that have taken place in college and professional sports, like with the National Hockey League putting a stop to their season as of last month.

Luckily, the Gauchos’ season was not canceled, but they were unable to play their opening game of the Big West Conference against UC San Diego. Also because of cancellations, they were not able to play UC Irvine for another Big West matchup on New Year’s Day. Although they have had their last two games canceled, the Gauchos have been putting up great numbers on the court this season.

Senior guards and forwards Megan Anderson and Taylor Mole have had a hot hand on the court this season with Anderson shooting 50.8 from three on 59 attempts and Mole shooting 54.5 from the 3-point range. The top scorer on the team is junior center and forward Ila Lane, who is shooting an impressive 59.0 from the field and leading the team in scoring by having 115 points in total.

On the defensive side, she has been a force as well, leading the team with 1.4 blocks per game and being the only one on the team averaging a block. Senior point guard Danae Miller is putting up solid stats with 3.4 assists per game while averaging the second-highest time with 28.1 minutes a game.

The other point guard on the squad is junior Johnni Gonzalez who is averaging 3.4 assists per game while adding 1.4 steals per game on the defensive end. As a team, the Gauchos are putting up impressive numbers despite not having the best shooting stats.

The Gauchos as a squad are also averaging 9.2 steals per game and 3.6 blocks per game.

The UCSB women’s basketball team will look to keep this winning streak up and stay undefeated in Big West conference play against Cal State Bakersfield.