The Daily Nexus
Swim and Dive
UCSB Swimming Looks for a Strong Finish to the Season
January 17, 2022 at 6:08 pm by Garret Harcourt 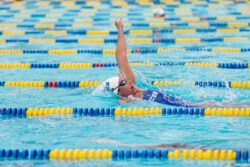 The following week, the male Gauchos took on a tough opponent with the University of Southern California and came up with a 172-85 loss at the meet. The women also took a loss at UC Los Angeles with a score of 167-92.

That meet began a rough stretch for the Gauchos as they ended up losing the following two meets.

The Gauchos were away at the following conference meet against UC San Diego where the men took a 152-110 loss and the women took a 153-103 loss.

In the next meet, the male Gauchos took first place in the Dixie State Invite with 1056 total points. In the 200-yard backstroke, freshman Kyle Brill dominated with a first-place finish. Another freshman standout, Taber daCosta, finished second in the 1650-yard freestyle. Senior Kian Brouwer, junior Dominic Falcon and sophomore Corban McIntosh each finished top three in their respective events.

Unfortunately, at the following meet, the Gauchos lost the meet they hosted against the University of Nevada, Las Vegas rebels by a score of 150-107 for the men and 171-86 for the women.

Senior Molly McCance, junior Gillian Flath, freshman Tyryn Empremsilapa, Lawrence and Nibarger each had a second-place finish, with Nibarger also having a dual third-place finish in the 100-yard freestyle.

The women’s and men’s relay teams had identical finishes at third place in each of their 200-yard medley relays.

The Gauchos will look to rebound at their senior day on Saturday, Jan. 15, against Cal Baptist before they close their regular season on Jan. 22 at Pacific University.