The Isla Vista Food Cooperative — a community-owned grocery store just down the corner of Seville Road and Embarcadero del Mar — celebrated its 50th anniversary on Jan. 7 amid recent financial recovery following nearly two years of reduced business during the pandemic. 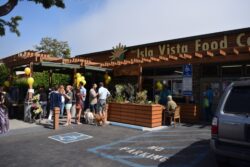 Lisa Oglesby, UCSB alumna and current president of the co-op’s board of directors, first became involved with the Isla Vista Food Co-op as a patron in the ’90s. She then stepped up to become an owner before eventually serving on the co-op’s board, where she has held a position for the last 18 years. For her, the co-op’s draw is in its product selection, operational structure, ethical mission and love of the community.

“The co-op has the products that I want,” Oglesby said. “But also, potentially more important ​​is the business model of the cooperative as an economic alternative to the way most businesses are run. And I find that to be incredibly important to be able to stand as an example of how you can do things differently.”

Under a cooperative business model, any individual can buy into ownership of the store, the money from which is reinvested into store operations, paying employees and community partnerships.

“In a typical business, it is run by the bottom line, while the co-op is run by [this idea of] ‘more than.’ The co-op has an aspirational aspect to it,” Oglesby said. “It’s like a constant cycle of working towards being the best version of a grocery store, or an employer or a community resource that you can be.”

The co-op lists its visionary goals – environmental stewardship, economic resilience, community advocacy and healthy food for all, among others – that it aims to balance with the demands of running a viable business.

“It’s a challenging time to make sure you’re being a resource for grocery [foods], make sure you’re keeping your workers safe, make sure that you’re maintaining your fiduciary responsibility to keep the co-op thriving into the future,” Oglesby said. “There’s a lot of balancing of competing priorities. But through all those things, we try and stick to our mission.”

During the pandemic, this balancing act became a more difficult task. Co-op General Manager Hernan Cornejo described how COVID-19-related school closures affected the store’s finances “substantially” with the diminished presence of UC Santa Barbara students, who are responsible for 70% to 80% of store sales.

The co-op weathered the pandemic, Oglesby said, but not without struggle, relying on government COVID-19 relief and “rainy day” funds —  savings from profitable quarters — in the face of a 24% drop in regular sales.

“Over the years, there’s been some highs and lows, and the co-op has weathered a lot of other stuff, crises within the community, the Thomas fire more recently. There was a time about 20 years ago where our co-op caught fire. It was closed for a number of months inside the building. We’ve had a lot of challenges that we’ve come back from,” Oglesby said.

Cornejo, who has experience working with multinational corporate grocers, was brought on the team in August to help economize operations after a friend told him that the co-op was experiencing financial difficulties.

“Co-ops are a very important part of communities, and unfortunately, many of them fail. The reason they fail is usually either the lack of knowledge from the people in terms of management or because they cannot balance, sufficiently, the activism portion with the business portion,” Cornejo said. “So it’s always a challenge, and I thought it would be a very nice thing to do to return what the community has offered me since I arrived into this country, to give back by making this co-op feasible for the next 50 years.”

Oglesby also thanked the Isla Vista community for its ongoing support. This January, when UC Santa Barbara chose to begin the winter quarter remotely, the store felt the impact on its bottom line. According to Cornejo, in-store customers dropped from 600 a day to less than 100 over winter break and through winter quarter’s online start.

Allison Baymiller, UCSB alumna and the co-op’s marketing manager, posted to social media to convey to the community the co-op’s dire financial situation and to encourage people to shop in the co-op.

“We did that sort of call-to-action reminder to let people know, and people really came out to support. Longtime owners came out and bought groceries, people shared it on social media,” Oglesby said. “It’s so wonderful to see how much people love and care about the co-op. I appreciate it so much, and we had a turnaround that really helped make December more than just a loss on the books.”

On Jan. 7, the co-op gave away 100 Crushcakes cupcakes to the first 100 customers to celebrate the day of its founding.

According to Cornejo, the co-op first began as an effort to create a buying group unattached to big grocers. The group, named the Whole Wheat Buying Club, met at a parking lot near the Isla Vista Community Center to distribute bulk purchases of food.

“They would bring a pick-up truck, load it with big bags of beans and rice, and they would start transferring small amounts to each one of the members. That’s how it started,” Cornejo said.

Later, the original group partnered with students from UC Santa Barbara to create the Isla Vista Food Co-op and formally opened the store on Jan. 7, 1974.

Baymiller said the co-op originally planned to hold a community celebration at the end of January to celebrate its 50th anniversary, but they pushed it to April following the university’s announcement to begin Winter Quarter 2022 with remote instruction. The event will include a small concert featuring local musicians and food.

“A big never-ending thank you to the students and other folks who have constantly supported us. That is always on our minds,” Baymiller said.

As the store looks into the future, Cornejo wants to improve the co-op’s visibility among the broader community and make it an affordable option for low-income residents in Isla Vista.

“The main reason this co-op was founded 50 years ago was to give the people in Isla Vista more affordable access to food. One of the things that the co-op lost for a long time  was the ability to provide affordable food, in part because we were limited [by our overhead costs and product selection],” he said.

Oglesby echoed the need for the co-op to evolve into a “community grocer” to expand its reach and ensure its longevity.

“Now we’re sort of pivoting towards, ‘What do we need to do to be a great store, to be a great place that people want to take part in, or to be an organization that people want to take part in’ and also secure that the co-op doesn’t just turn 50 but turns 60, 70 and so forth? I won’t be here when the co-op turns 100, but I hope it does,” Oglesby said.

I was the founding president of the IV Fud Coop. This January 7, 1972 date is wrong. Fud started organizing in the Fall of 1973 and the store opened at the end of January 1974.

Hi Larry, there is a mistake in the article as you well pointed. Jan 1972 we celebrate the origins of IVFC with the Whole Wheat Buying Club. Sept 1973 the IVFC is incorporated and Jan 1974 the store is open. The article incorrectly dates the store opening in 1972.

When the Coop sent out the SOS, I and others gladly contributed to help keep the doors open. Why? Because, even though it’s been many years, IV is still a magical place for many of us.