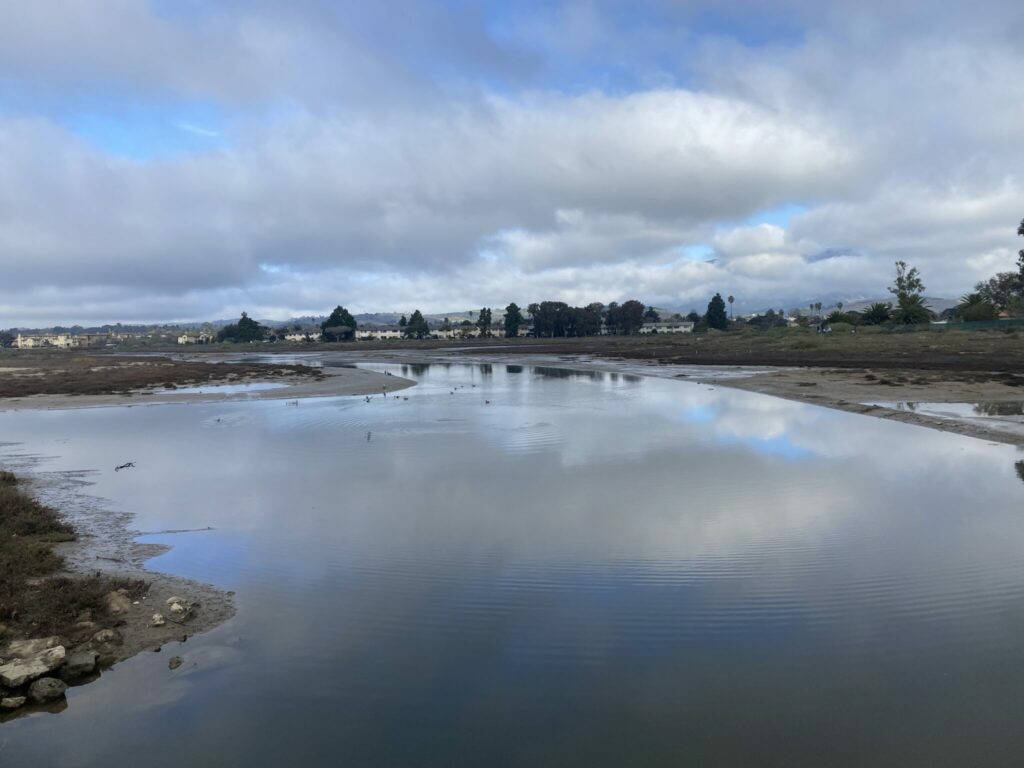 What was once a waterlogged golf course now welcomes the return of the upper reaches of Devereux Slough. Sean Crommelin / Daily Nexus

As a freshman living in Santa Catalina Residence Hall, I would occasionally run in the open spaces immediately to the west: an interconnected patchwork of wetlands, estuaries, grasslands and eucalyptus groves making up Sperling Preserve on Ellwood Mesa, Coal Oil Point Reserve and — adjoining the two parcels — the North Campus Open Space.

I hadn’t the foggiest idea then that that parcel providing this continuity had, less than a decade before, been a golf course.

When I told this to Andy Lanes, the Cheadle Center for Biodiversity & Ecological Restoration (CCBER) education and outreach coordinator, he grew visibly excited.

“[I’ve been] talking about shifting baselines with kids and their relationship with nature. How you might be born into this world and this environment that you’re living in is what you know, whether it’s a little bit polluted or contaminated,” Lanes said.

“Now we’re doing restoration. Some of these sites might someday be the opposite. There might be somebody that comes by and goes never having known it as a golf course.”

The name of this golf course was Ocean Meadows Golf Club, and its construction decades ago was marked by the inundation of a network of natural wetlands with 500,000 cubic yards of soil, forever changing them.

From 1965 to 2013, the course welcomed golfers who could tolerate its tendency to become muddy and waterlogged. Even prior to the establishment of the golf course, the land north of Devereux Slough was altered to accommodate the ever-changing and multitudinous needs of its human inhabitants.

“We have some early aerial photos of the areas starting in 1921. We can see what those systems were like. But even by that time, they were largely degraded from all the change from agriculture to other developments in the area,” Lanes said.

In a landmark conservation deal with the Trust for Public Land in 2013, Ocean Meadows Golf Club was sold by its owner, Mark Green, for $7 million, with a further $10 million raised to facilitate the golf course’s transformation into a “functional and educational wetland,” with CCBER’s help.

For the past seven years, CCBER — led by Lisa Stratton, the director of ecosystem management — has spent those millions of dollars working to bring the historic tidal estuary back to the present.

“The general idea was, would it be possible to take this golf course and integrate it back into this historic wetland? And so, we’ve been doing that,” Lanes said.

First, they brought in heavy equipment to grade the former golf course and create a landscape of wetlands and uplands. A total of 350,000 cubic yards of soil were excavated to accomplish this. In addition, the network of concrete paths which navigated the golf course was broken up and left in piles throughout the preserve to serve as an innovative habitat for wildlife.

Then came revegetation efforts by CCBER, which has carried out thousands of hours of work to suppress invasive species and promote the reestablishment of native plants.

“We have new strategies to do larger areas out there like drill seeding the seeds of native grasses to plant much higher numbers of grasses than we otherwise would be,” Lanes said.

“When we can’t do that, however, we’re planting everything individually. Individual plants in 2-inch pots, hundreds of thousands. It’s a huge project, a lot of work, and they’re all grown organically and initiated from seed that we collected locally — not just focusing on California natives but also specifically local genetics.”

What has resulted from this work is a landscape transformation. Now, the North Campus Open Space (NCOS), readily accessible from Sierra Madre Villages, encompasses an undulating wetland landscape with tributary drainages that extend north of Devereux Slough and penetrate northwestward and northeastward.

Surrounding these wetlands is a series of trails and bridges, 2.25 miles in total length and connecting to the California Coastal Trail, which provides walkers with ample opportunities to see the slough from a variety of vantage points.

How water moves on the land has also transformed. What was once a waterlogged golf course now welcomes the return of the upper reaches of Devereux Slough, which itself welcomes wildlife large, like the great blue heron, as well as small, like the elusive and ephemeral tidewater goby, which sneaks into the slough when it connects to the ocean following heavy rainstorms.

“So the golf course wasn’t a bad habitat [for birds]. However, we know that we’ve lost a lot of wetlands in California, particularly Southern California, and rebuilding a wetland may change the number of birds or change the types of birds that we see in the wetland,” Lanes said.

“I’ve seen a huge change in the wildlife, particularly waterfowl and shorebirds and even the endangered snowy plovers.”

The broken-up concrete slabs strewn about the open space are even known to host burrowing owls, according to Lanes.

As the wetlands and mudflats have extended the range of the tidal estuary, the architects of the NCOS have worked to make the landscape more resilient to climate change by incorporating potential complications from sea-level rise into their management plans.

Since then, the project has taken on many new helpers. Anywhere from 10 to 40 undergraduate students per quarter work on the project part time, carrying out ongoing landscaping and restoration work to reestablish native plants in the open space preserve.

What Lanes finds especially rewarding about the restoration process are the educational opportunities that it has provided for students — not just undergraduates, but also young children throughout the South Coast and beyond.

“It’s an ideal place. We have this unprecedented wetland restoration project within a mile of [the] UCSB campus but also right next door to elementary schools, to preschools, and then the whole surrounding community over there. So all of these people are using it. There’s even an outdoor classroom being constructed currently,” Lanes said.

To provide services to those in the community, the open space has also enlisted the help of naturalists in the general public who have become certified to serve as nature guides. These guides provide tours on the third Saturday of every month as well as more specialized tours during other times. A tour on the 15th this week, for instance, will be held in both English and Spanish.

For those hoping to contribute to restoration efforts, the second Saturday of every month provides an opportunity to volunteer in the open space.

“The school year before [2020], we had over 1,200 students come to visit to work on the project. So, I think it’s hugely successful and not just for the wetland being restored but also the community itself,” Lanes said.

“For me, a local, seeing it all happen is crazy. It’s so much different. I used to play golf there with my dad when I was a kid … it’s amazing seeing it now as a wetland and being like, ‘Oh, this is where the ninth hole was or where I made that shot that one day.’ Now I’m working there with kids. It’s such a trip.”

Sean Crommelin
Sean Crommelin is the Science and Tech Editor for the Daily Nexus. He can be reached at science@dailynexus.com
2 Comments
Inline Feedbacks
View all comments

Great article Sean! It’s wonderful to see people turning back the clock and returning open space to what it had been for hundreds of years. I’m sure the Chumash would be pleased! I recall that golf course when I lived in Isla Vista from 1980 to 84. I remember it drying out and looking patchy brown during the summers.

Great article Sean! It’s wonderful to see people turning back the clock and returning open space to what it had been for hundreds of years. I’m sure the Chumash would be pleased! I recall the golf course when I lived in Isla Vista from 1980 to 84. I remember it drying out and turning patchy brown during the summers.