The Daily Nexus
Opinion
Argument in the Office: Top or Bottom? — Battle of the Bunks
December 31, 2021 at 10:00 am by Zuri Wilson and Sabine Carreon

You Wanna Be on Top … Trust Me

Personally, I think that being a top is the best. I would know, given that I am a top myself. As someone who’s on top, I enjoy being in control, going up and down and sleeping without the fear of the bed on top of me caving in. Without a doubt, I assure you, the top bunk on a bunk bed is the best place to be.

For one, the top bunk is very reminiscent of my childhood. I remember my excitement when I first got a loft bed in elementary school, allowing me to sleep above everything and everyone in my room. To me, sleeping on the top felt like I was the top dog. I was the leader, the queen of the room.

Even today, a similar feeling is evoked from the top bunk. People on the top bunks are essentially the queens and kings of the room. As the rulers of the room, we are literally and figuratively above everyone else. When you are on top, you feel in power, in charge. You have more flexibility and freedom. You are more in control of what and who is on your bed. In a way, I kind of feel bad for all the bottoms out there. Not only do they have to deal with the threat of being crushed, but those on the bottom bunk have to deal with the constant threat of unsolicited visitors utilizing their bed as a communal space; their bed basically doubles as a couch. I don’t know about you, but I like having a bit more of a say in exactly who I have on my bed.

Another benefit of being on the top bunk is that we have the luxury of our own space. In an environment like college where you are subjected to constant socialization, it is nice to have a little isolation at times. There are several benefits to this. For one, since the top bunk is separated from the rest of the room, if your roommate has to wake up early for an 8 a.m. lecture, you are less likely to be disturbed by their rustling than if you were on the bottom bunk. Moreover, no one can see what you’re reading … or watching … or even doing from the top. You have complete and utter privacy.

Some people even argue that the view is better when you are on top. I couldn’t agree more. On the bottom bunk, what are you forced to see? The bed directly above you. It can feel suffocating at times; at the top, on the other hand, you get a pristine vantage point of the main body of the room as a whole. Think about it this way: The top bunk is like a beautiful castle with solitude and gorgeous views. On the other hand, the bottom bunk is the dark, cramped hut on the side.

Are you convinced yet? Do you see all the many ways that in the debate between top and bottom bunk, the top bunk is always on top? If you still believe bottoms are superior, I guess I understand. I mean, I will admit, being a top can get tiring at times. So much work and effort is involved … you know, because you have to climb up the ladder. If you have the top bunk, you know that in the beginning you can get excited, especially after seeing the view from up top. Yet, after all that work spent going up and down, it is easy to slow down and get tired — that ladder is tiring! Despite this, take comfort in knowing that tons of people respect tops and the hard work they put in. And, sex on the bottom bunk is honestly so boring. Don’t you want a little adventure in your sex life? Yet another reason why the top bunk is so great!

Don’t just take my word for it. In a survey conducted by Correlated, out of 411 people, 52% stated they prefer the top bunk. This topic may be polarizing and opinions may be fairly evenly split. However, there are still more people who believe that the benefits of being on top outweigh the downsides.

Famous model Tyra Banks herself even expressed support for the top bunk. In the theme song of her hit show “America’s Next Top Model,” she sings, “You wanna be on top.” Okay, so she may have been referring to people wanting to be on the top of the modeling industry, but the sentiment is the same still. In the debate of top bunk versus bottom bunk, you want to be on the top.

Zuri Wilson thinks that the top bunk is the superior bunk bed choice. It can be difficult and tiring at times to be a top, but when all is said and done, it is well worth it. 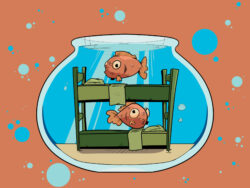 The Real Top Dog is a Bottom

If you’re reading this and you sleep on a top bunk, this is about to get personal. Sorry, but is there really still anyone who’s a top these days? Bottoms and bottom bunks are superior, and you can’t convince me otherwise. You’d be wrong if you thought top bunks have all the power. On some insignificant, superficial level, maybe they seem like they have it all, looking down from their lofty throne at you as they sit with their head hitting the ceiling. But who chooses when the lights go off? Who chooses if and when to hand them the computer they left on their desk? Who can roll out of bed in the morning without even having to open their eyes? Who can come home from a rager and crash without a second thought? Who has better sex? Bottom bunkers. Don’t try to question it. This issue extends beyond practical matters. Where you choose to sleep reflects who you are.

The fact of the matter is that bottom bunkers are better people. When you leave your potato chips and phone charger down below, it’s the bottoms who hand you all your shit. And not because we have to, but because we choose to. Don’t misinterpret this as a top bunk power play. We have all the power, and here we are, deciding not to abuse it. If we really wanted to, we could make you climb down from your slumber pedestal and take responsibility for your actions, but we don’t. Why? Because we’re generous and forgiving.

Don’t forget how easy it would be for us to turn on you. I know if my roommate screwed me over, I could make her life a living hell in a heartbeat. The point being, I always could, not that I ever would. I think being literally closer to the ground makes you a more grounded person overall. There’s no stress thinking about how I’ll ever make it to my bed without falling, no foot cramps and close calls trying to scramble up those wooden bars in those dirty ass socks. Believe me when I say I know y’all’s feet are nasty.

Naturally, my life is just better. And when Rex Orange County said that “Loving is easy,” he must have been writing that from the bottom bunk in his college dorm. And he was so right. Sex is so much easier, okay. And believe me, when a top bunker invites someone over for the night, it sure as hell won’t be the owner of the top bunk wanting to actually be on top because they know that most of what they’d be banging is their head against the ceiling.

And what does sleeping in the top bunk say about someone? You put on a show about how much harder it is to get out of bed, how much harder it is to move around, but secretly you’re glad because (shhh!) you never wanted to get up in the first place. The inconvenience of the ladder is really just a convenient excuse. Bottoms do all the figurative heavy lifting. All tops have to do is lift themselves. The only thing keeping top bunkers feeling good about themselves is the physical appearance of being above it all. Lazy asses with a superiority complex. This description is almost reminiscent of a certain, Cheeto-stained president I can’t remember the name of.

But look, if you were one of those kids who always dreamed of claiming that top bunk position, by all means, go for it. Just make sure you know that bottoms will always be the real tops.

Sabine Carreon fiercely believes in the power of being a bottom (bunker). If you think sleeping on the top bunk gives you a leg up… think again.