The Daily Nexus
Features & Essays
In Conversation With Isla Vista Band The Framers
December 26, 2021 at 11:27 am by Razeen Ahmed and Jacqueline Sedley

The first time Franky Sansone ever crowd-surfed was in January of 2020. Isla Vista indie-rock band The Framers was holding a show in a Del Playa backyard overlooking the ocean, and guitarist Sansone took the plunge into a sea of 200 or 300 college students while his bandmate Oliver Chavez dove into a guitar solo of Jimmy Eat World’s “The Middle.” 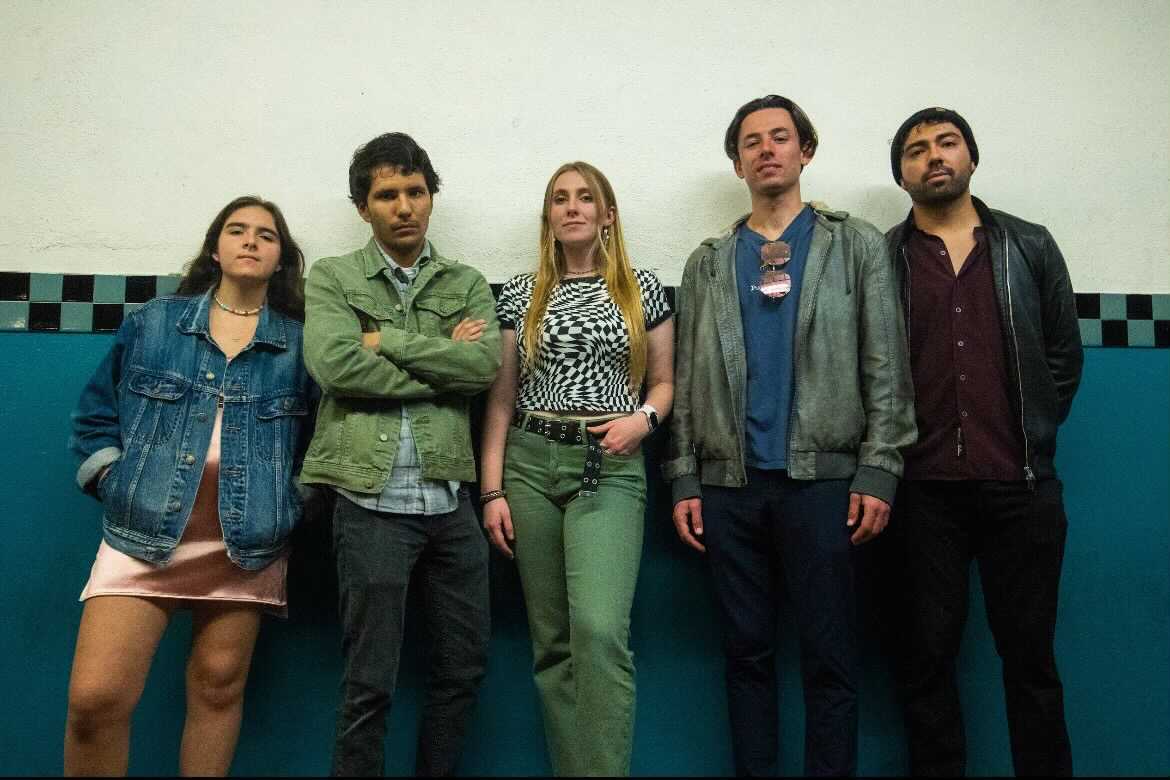 Courtesy of The Framers

“No one said anything about bringing me back to the front,” Sansone said about his iconic rock show experience. “But I came back, right as we went into the final chorus, like right on the perfect beat. And there was just something romantic about that … It just felt very surreal at that moment. And I’ve crowd surfed a couple more times after that. And it’s definitely fun, don’t get me wrong … but it wasn’t the same as that first time.”

Sansone founded The Framers — consisting of himself on rhythm guitar, Julia Trites as lead singer, Allison Corwin on bass, Max Davis on drums and Chavez on lead guitar — back in 2019. The group has been filling the I.V. backyards of rowdy moshers ever since.

While the band name may seem like an ode to the U.S. Constitution at first glance, Sansone confirms that he did not create a Founding Fathers tribute band. Rather, the band’s name pulls influence from Sansone’s childhood. Sansone played baseball growing up, and his position was catcher. “The act of receiving a pitch was called framing. It’s actually kind of a roast when they say ‘Frankie Framer’ was always my nickname,” Sansone said. Yet, the cheeky nickname eventually led to the rock band name The Framers.

The Framers’ signature indie-rock sound can be heard through Sansone’s infatuations with The Strokes, Arctic Monkeys and the Guitar Hero III soundtrack, which show up in The Framer’s cover selections and personal discography.

While Sansone tends to “rally the troops” and set achievable goals for the band as the founding member, he made it clear that everything they do is collaborative.

“It’s not ever ‘Frankie wrote this song,’ ‘Oliver wrote this song,’ Julia wrote this’ … It’s ‘The Framers wrote it.’ And I think that’s the one thing that comes from just my sports background …  you do have your MVP, but the MVP can’t do anything if the rest of the team is crappy,”  Sansone said.

“I feel like our biggest pro is that we’re all pretty cohesive. Oliver and I are really good. Yin Yang. Allison knows when to go off in the bass. Max knows when to put a little extra finesse with the drums, and Julia is just dope. So it’s just a good, cohesive team right now,” Sansone said.

The band was “starting to peak a little bit” at the start of 2020, according to Sansone. By that point, The Framers had played three shows on DP and one at Sam’s To Go, allowing the group to gain a following.

However, when the pandemic hit, “our biggest fear was we were all going to disband. Three of us were graduating. And we thought, that was it. … [Davis] was gonna move to San Francisco and I was going to graduate and probably move back home to the Bay and [Trites] was probably going to move away … And that was a very scary time,” Sansone explained.

Yet, a week after June 15, the day Governor Gavin Newsom fully reopened California, The Framers held their first in-person show in over a year. Currently, all the bandmates are vaccinated and roughly 98% of UCSB students are vaccinated, which Sansone said makes the band feel reassured about continuing to hold concerts in I.V.

The Framers are back in action, ready to go wherever they are taken. “[We don’t] have a very calculated agenda … we want to keep playing [shows]. And I think the more we do that, the bigger audience we get,” Davis said.

As their musical careers continue, the band members stay committed to growing as artists. “I tell myself this … on the drums. I want to be like, “Today is the best I’ve ever been,’ you know? I want to be able to say, like, ‘I was better than I was yesterday,’ until you’re gone. And, like, that’s all that really matters,” Davis said.

The Framers have become an integral part of the Isla Vista band scene, and their I.V. claim to fame comes with overwhelming positives — and a few inconvenient negatives, according to Davis. 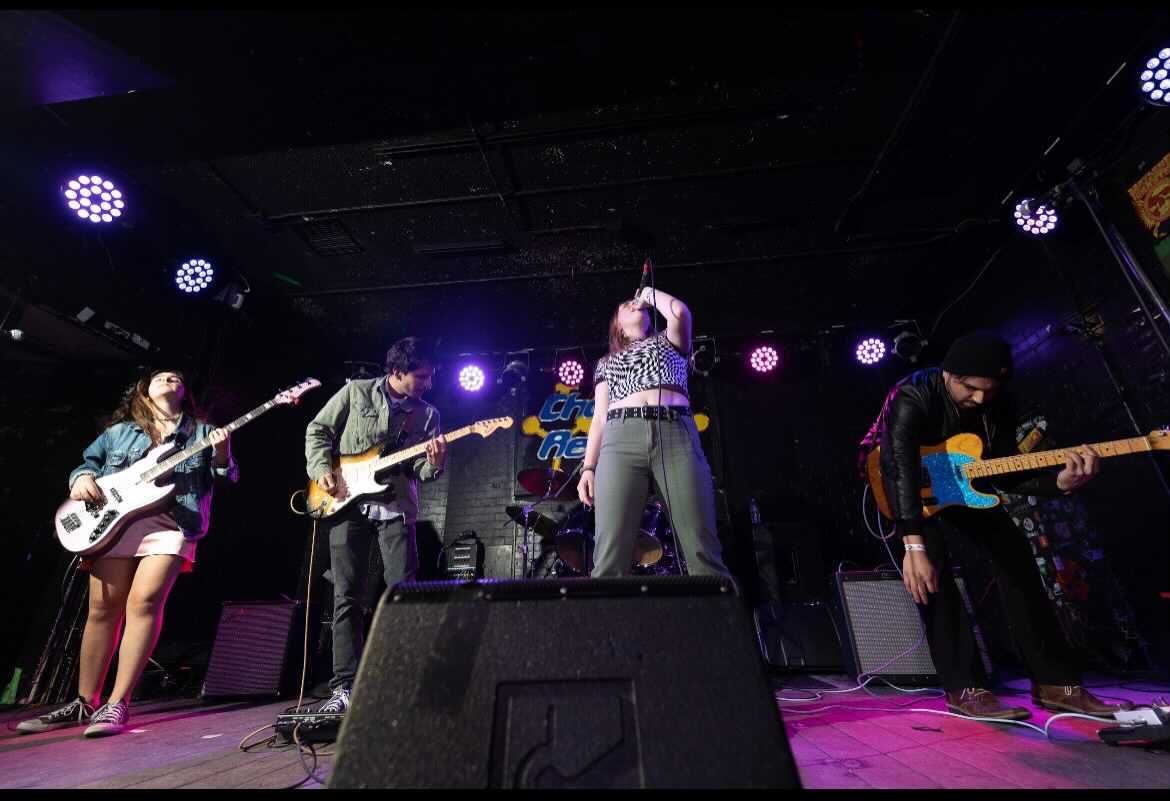 Courtesy of The Framers

“I.V.’s fun. Everyone’s, like, down to party and just, like, get drunk and have a good time. So that’s definitely a pro,” Davis said. “A con? It can get a little messy sometimes. Like at our last gig, I think we got some beer and champagne spilled on our gear and drums. Yeah, that’s a little much. [But] I don’t really care. It’s fun,” Davis said.

At a recent The Framers show, a girl rushed the stage and got her hair stuck in the headstock of Sansone’s guitar, and he had to make a game-time decision in favor of the show going on. “I was like, I gotta rip this out, otherwise I can’t play my guitar, and I said, ‘Three, two, one!’ I think she didn’t feel it. So, yeah, it was crazy,” Sansone said.

Their band shows also entail cherishable moments. For a long time, Sansone had wanted to perform in front of his father, but it was not until recently that he had the opportunity. “It was cool to buy him some drinks at Sandbar for his birthday, and he watched our whole two-hour set and he knew every song, which is funny because a lot of the songs honestly come from him … And I think that was probably just the most special moment,” Sansone shared.

Sansone reflected on his father’s influence, “I just think about all the moments we had just growing up, because he drove me to baseball practice every day, he helped support me, go through junior college, and then UCSB, and now I’m independent. So if there’s anything I can do to make up for the first 20 years of my life, I’m going to do it for him,” Sansone said.

While the band members perform rock shows at night, many identify as “a musician with a day job,” as Davis described himself. Davis is an accountant by day, and Sansone works in sales; however, at night, the story is completely different, as raving crowds of people push and shove to get closer to them and to their music that connects so many people in I.V.

Looking forward, the band is currently working on new music and is excited to branch out of Santa Barbara to play in cities they “can’t even pronounce.” “It’s going to be cool to see where we go from here,” Sansone said.

300 people on a balcony. When it colapses don’t sue the owner