The Daily Nexus
Film & TV
In Review: Dasha Nekrasova’s Debut Feature “The Scary of Sixty-First” Is Undeniably Intriguing Yet Ultimately Disorienting
December 25, 2021 at 11:49 am by Makenna Stark 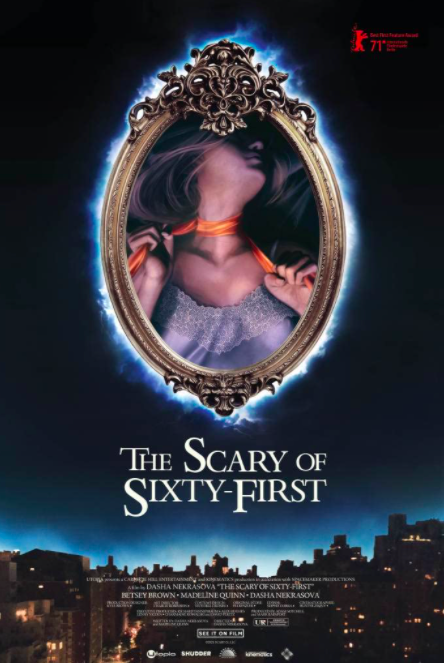 Following the revolting life and contentious death of billionaire sex offender Jeffrey Epstein, there was an outburst of online theories regarding the true evils of the elite class. Dasha Nekrasova’s debut feature, “The Scary of Sixty-First,” is a psychological thriller that explores the disempowerment that can result from uncovering atrocities as horrific as those committed by Epstein. While aesthetically intriguing and full of ardent intentions, “The Scary of Sixty-First” falls short in terms of coherence.

The film centers around two young women who become trapped in the obscurities of the late Epstein’s life. The story opens with Noelle (played by Madeline Quinn) and her slight annoyance of a friend named Addie (played by Betsey Brown) as they apartment hunt in New York City. When they come upon an Upper East Side duplex that is uncharacteristically inexpensive, they can’t pass it up. After all, who would two 20-somethings be to pass up the opportunity to live in luxury at an insignificant price? The girls made the obvious choice to move in, ignoring the dubious locks on certain doors and mirrors on certain ceilings.

Shortly after the girls take up residence in their new apartment, things take a sinister turn. Noelle meets a mysterious unnamed girl, played by Nekrasova herself, who informs her that their posh new abode was previously inhabited by the recently deceased, or rather murdered, Jeffrey Epstein.

In the interest of avoiding spoilers, it is fair enough to say that the finale of the film solidifies its incoherence. This is not to say that the film is not intellectually stimulating or entertaining; it is simply to say that it lacks a certain articulacy. Perhaps this is intentional, pointing to the muddled anxiety that still plagues society in regard to the corruption of the elite class. However, within the confines of the film, one may be left wondering, “What’s the point?” when the credits begin to roll.

It would be unfair not to mention the striking aesthetics of “The Scary of Sixty-First.” Shot on 16-mm film with clear influences from 1970s psychological thrillers, Italian giallo films and Stanley Kubrick’s “Eyes Wide Shut,” “The Scary of Sixty-First” is, to say the least, visually alluring. There is also something to be said for the stellar score of the film, done by Eli Keszler. The sounds of the film create a classic sense of horror through psychologically invigorating music.

Ultimately, the film seems to be a window into the illusive mind of the actress, writer and niche micro-celebrity that is Nekrasova: a woman whose critical observations of society captivate a certain audience while vigorously repulsing another. Nekrasova herself has long been interested in revealing the deeper secrets of Epstein’s atrocities and the elite circles he occupied.

In a recent interview with Vice, Nekrasova was asked if she identifies as a conspiracy theorist. She replied, “As my character says in the film, ‘I’m not a conspiracy theorist, the only conspiracy is the one between the elites who depend on a permanent underclass for them to exploit,’” which sums up the tone of the project.

When watching the film, it almost feels like an extended nightmare derived from Nekrasova’s consciousness. At a Dec. 4 screening of the film in Los Angeles, the small crowd chuckled at certain lines that explicitly mirror the sentiments that Nekrasova shares on her cultural commentary podcast “Red Scare.” It seemed as though they weren’t expecting such transparency of Nekrasova’s personal convictions in her art, or perhaps they were and chuckled merely out of smugness.

Essentially, “The Scary of Sixty-First” is at best an ultra-niche exploration of the effects of Epstein’s villainy and at worst an incomprehensible night terror of Nekrasova, a woman who earnestly held “Epstein Truther” meet-ups in the days following his death, hoping to uncover the full extent of his criminality.

While the film as a whole lacks coherence, there are qualities of Nekrasova’s debut feature that make it a unique reflection on society’s attempts to grapple with its perceived powerlessness in relation to the elite class. There is something to be said for an unabashed artist: Nekrasova proved herself to be confident and dedicated to her convictions in the creation of this film. “The Scary of Sixty-First” is playing now in select art house cinemas and is set to be widely released on Dec. 24.