The Gauchos battled throughout the season only to come up a bit short, losing to the top-seeded Big West team, UC Irvine, 0-1. 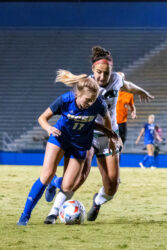 Leading up to the contest, the Gauchos were in a tough stretch of games as they started October with a draw, then a three-game win streak. From that point on, they lost to their rival Cal Poly, then to UCI, and bounced back in a shaky win over Long Beach State leading into the Big West Tournament. By the end of the month, the Gauchos were placed as the four seed.

Due to the shaky month of October, the Gauchos were placed as the four seed against the top seed, UCI, who they had previously just lost to.

The semifinal match between the Anteaters and the Gauchos had some stat lines you don’t see too often.

The only goal of the match came from a penalty kick goal by junior midfielder Scarlett Camberos of UCI, with the goalie of UC Santa Barbara picking up the yellow for the foul in the box.

The Gauchos outshot the Anteaters in the second half, forcing 2 saves from Irvine sophomore goalkeeper Glo Hinojosa.

In the end, the Gauchos could not convert their chances in the second half, leading to the loss and a late yellow card which forced a red card to the Gauchos’ junior goalkeeper, Evann Smith.

Looking at the end of the season’s statistics for the Gauchos, one standout performer was senior defender Emma Vanderhyden who led the Gauchos with 3 goals, 4 assists and 10 points.

Two freshman standouts were defenders Shaye Douglas and Alyssa O’Brien, with Douglas picking up 7 points with 3 assists and O’Brien having 6 points with 2 goals and assists apiece.

Overall, the UCSB women had 10 players with a shot on goal percentage at or above .500 percent, so it was a matter of finishing chances for the Gauchos.

Although the Gauchos’ goalies managed 7 shutouts, the defense was a bit of an issue throughout the season, forcing over 4 saves a game from the goalie.