The Daily Nexus
Sign of the Times
Political Hobbyism: America’s Favorite Pastime
November 29, 2021 at 10:53 am by Brian Byrne 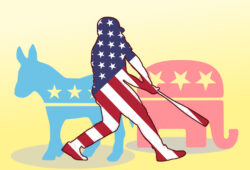 In late September I joined a crowd of excited fans as we funneled into Nationals Park to witness the annual congressional baseball game. Lawmakers pitted against each other, Democrats versus Republicans, in a grudge match for press coverage and bragging rights. Oh, and to raise money for charity, of course.

The spectacle did not fail to astonish. These far-from-professional players in far-from-peak athletic condition botched plays and strained their hamstrings in the same stadium where the Washington Nationals would play the Boston Red Sox one week later. The whole thing was streamed live on C-SPAN, complete with replays and commentary that cycled between sports coverage and political analysis. The camera would cut from a congressman with no good reason to ever step foot on a professional sports field over to Nancy Pelosi in the stands, animatedly talking on the phone in the midst of some apparent political deal.

The bleachers were filled with congressional staffers, interns and self-professed political geeks cracking jokes and cheering in the spirit of the sporting event. Runners stole bases at will, prompting ironic chants of “stop the steal” that reverberated through the crowd. Any hit to the outfield had a likely chance of being an inside-the-park homerun due to the subpar fielding skills of Congress.

President Joe Biden trotted out in a surprise appearance at the top of the second inning. He planted himself in the dugout, shoulder to shoulder with his Democrat team, until he walked over to the Republican side and was promptly booed by rival fans in fitting sports team fashion.

Sitting there in the stands, I was repeatedly struck by the sheer absurdity of the display. Here I was, cheering at the top of my lungs for a 60-year-old congressman to steal home as fast as his varicose calves could carry him, while other, equally unfit non-athletes tripped over each other “Bad News Bears” style in a pitiful effort to throw him out. I must admit, it was incredibly entertaining.

The sense of amusement, however, was accompanied by an unmistakable tinge of guilt. I couldn’t help but feel that the game was somehow counterproductive, that the pageantry was distracting from something more important. Then I remembered a book I read a while back, and my cognitive dissonance suddenly had a clear source. I was a “Political Hobbyist.”

The term political hobbyism was coined by political scientist Eitan Hersh in his book “Politics is for Power.” Hersh defines the phenomenon as the act of keeping up with politics as a form of entertainment rather than as a vehicle for meaningful change. To the hobbyist, following the news is a purely intellectual exercise removed from tangible consequences.

Hobbyism is often inadvertent. Many political hobbyists feel passionately about a particular issue and truly wish to bring about real change. They scour mountains of articles, engage in spirited — sometimes heated — discussions, and post social media updates when something notable happens. Hobbyists often feel satisfied by staying engaged and contributing to the conversation. However, this does more to ease their conscience than it does to produce actual results.

There is a disconnect between the behavior of the hobbyist and the ultimate objective of politics. The goal of politics is not thought-provoking philosophical arguments about theoretical issues; the goal is to pass legislation that will better the lives of American citizens. If your words never materialize into concrete action, you’re engaging in hobbyism.

Political hobbyism stands in direct contrast to political activism, the true means of change. The activist rallies people around a common goal and organizes them into voting blocs, thus amplifying their voice in the electoral process. In this manner, a community can lobby for the action they hope to see from their government. The activist actively amasses power, while the hobbyist passively talks about it.

Hobbyists, Hersh argues, contribute to a distorted political landscape that values empty gestures over substantial action. When large swaths of American citizens skim the news for headlines about the latest drama on the Hill, politicians recognize they will be rewarded for flashy displays of political theater. Provocative soundbites are the currency of the modern news cycle, which incentivizes posturing, grandstanding and virtue signalling, and thus detracts from Washington’s essential function: legislating.

At face value, the congressional baseball game is nothing more than a fun way to raise money for charity. The competition is relatively good-natured, and winning or losing is ultimately irrelevant to the bigger picture. At the same time, however, the game is an extravagant display of political hobbyism. It divides Congress into two literal teams along partisan lines and encourages fans to root for them not on the basis of policy, but for hitting balls with bats.

The Congressional baseball game removes politics so far from policy that it may be one of the purest forms of political entertainment. The game resembles all of the least functional aspects of our democracy: divisiveness, partisanship and performance. It offers all of the fanfare without any of the substance. The game was entertaining, but maybe politics shouldn’t be entertaining. Maybe it should be less sensationalized and more pragmatic. Less talk, and more walk.

Brian Byrne is a recovering political hobbyist trying to convert ideas into action.