The Daily Nexus
Opinion
Argument in the Office: The Del vs. The Bell
November 29, 2021 at 11:04 am by Aaron Wells and Makenna Stark

The Indispensable Fast-Food Chain That is Taco Bell

The everlasting debate over Taco Bell and Del Taco is one that must continue no longer. There is no doubt that the Taco Bell menu is a cultural phenomenon. Del Taco pales in comparison to the originality and quality of signature Taco Bell items like the Crunchwrap Supreme and Doritos Locos Tacos.

The greatness of the Taco Bell menu is fully encapsulated in the Baja Blast: a uniquely satisfying flavor of Mountain Dew, available as both a soda and a slushie, only at Taco Bell. Anyone who has been lucky enough to experience the Baja Blast can attest to its distinctive wonder.

Notably, the Taco Bell menu sticks to their brand. Anyone who has had the experience of realizing Del Taco sells cheeseburgers understands the pure confusion that follows. Such confusion is nonexistent with Taco Bell. Even when they do experiment with new items, Taco Bell ties it into the brand seamlessly, as they did with the Breakfast Crunchwrap.

In addition to their unparalleled signature items, Taco Bell’s menu offers a slew of vegetarian options and modifications. Substituting with spicy potatoes or beans allows you to have the flavorful Taco Bell experience of virtually any menu item sans meat.

As a former vegetarian, I can attest to the fact that eating fast food quickly becomes a rather bland experience filled with french fries and bean and cheese burritos. Fortunately, this is not the case with Taco Bell. With vegetarian substitutions available at no extra cost, vegetarians no longer have to suffer through starch-filled, flavorless and slightly depressing fast-food meals.

When it comes to the cost comparison, you get the quality you deserve with Taco Bell given the price. Although you may be spending a few more cents in comparison to Del Taco, the satisfaction you gain from the flavor outweighs the extra 40 cents you spend on your crunchy taco.

Not to mention the money you save on gas by staying local to Santa Barbara in comparison to making the colossal trek to the nearest Del Taco in Ventura. The convenience of the Taco Bell locations on Fairview Avenue and Hollister Avenue — both open until midnight —  is something Del Taco simply does not challenge.

Fast-food doesn’t have to be dull. Why have a meal that just gets the job done when you could have a Crunchwrap Supreme? Whether you are going to the drive-thru late at night with friends or stopping in for a midday Baja Blast, Taco Bell will always be there to satisfy your cravings.

Makenna Stark is now longing for her classic Taco Bell meal of a Crunchwrap Supreme (beans instead of beef, no sour cream) and a Baja Blast Freeze. 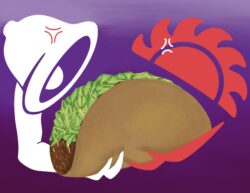 The debate between Del Taco and Taco Bell can easily be answered with the following: You’re going to a fast-food restaurant and you want something simple and cheap. Del Taco provides that and more when compared to Taco Bell, which is mediocre and a bit pricey for what you get.

You’re not going to these fast-food restaurants for an authentic Mexican food experience, you’re going there for a quick and easy meal. Del Taco, with its cheaper prices and wider variety in menu items, is the solution. They feature tacos that are less than a dollar, combo meals that are simple and get the job done, and a variety with hamburgers, french fries and burritos. Del Taco simply has more for less.

Del Taco’s tacos are great for their price — simple and satisfying while satiating that craving for a guilty and cheap meal. Their red hot sauce bean and cheese burritos hit the spot for something filling. To end the meal, customers have the option to get something sweet, such as one of their vanilla milkshakes.

Taco Bell underwent major changes in their menu recently, ripping out classic meals from their restaurants, such as the Mexican Pizza. All that’s left is a tiny menu with little variety, which while I will agree is good for quality control, leaves the restaurant lacking in terms of bringing about opportunities to try something new.

On the other hand, Del Taco still has a wide variety of different options, including milkshakes, churros and donut bites. Taco Bell desserts are limited to Cinnamon Twists, Cinnabon Delights and frozen fruity drinks. In my opinion, the cinnamon desserts are disgusting and overpriced. Each Cinnabon Delight being roughly a dollar each? Not worth it.

Del Taco’s burritos and tacos are simple and great for meals with friends for hangouts. Fiesta Packs hold two more tacos and burritos in them for $2 cheaper when compared to Taco Bell Party Packs! If you’ve got a party of six, you’re going to spend a lot more for Taco Bell than Del Taco.

I’ll raise a white flag on the argument of location. Sadly, there isn’t a single Del Taco in all of Santa Barbara county — a terrible sin. If Del Taco was nearby Isla Vista, I’m sure students would flock to it in lieu of Taco Bell.

Del Taco provides your fast-food cravings at a cheaper price. The great variety and simple meals will be more than enough to satisfy your cravings for quick food; be it desserts, burgers or tacos.

Aaron Wells thinks about how this article is all free ad-space for these rivaling companies, but still craves a few Del Taco burritos with their red sauce and a milkshake.