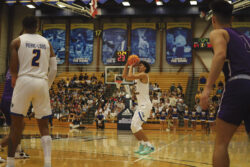 Nothing went the Gauchos’ way in the first half. Sloppy play resulting in turnovers and bad shot selection found them in a hole early. What worked against San Francisco State in the season opener for the Gauchos resulted in little success against the Cougars. Defensive stops didn’t come any easier to the Gauchos as the Cougars had an answer on both ends of the floor, leading 41-25 at the half.

The final score was largely misleading because the Cougars found ways to bolster their lead up to 20 multiple times in the second half. Any sort of traction the Gauchos would gain, the Cougars found ways to counter it and pile on to their lead. Rebounding and second chance opportunities got in the way for any sort of comeback to happen for the Gauchos as boxing out their opponent became more difficult as the game went on.

However, comeback efforts began in the final five minutes of the game where they were down 16. The offense used different sets and actions to exploit parts of the court they couldn’t in earlier parts of the game. The energy picked up when Amadou Sow went on a run of his own to cut the lead down to 12 on two layup attempts. Besides Sow’s offensive dynamics, the rest of the Gauchos offense couldn’t be found to facilitate a real comeback due to Washington States ability to block shot attempts from inside the paint.

Sow had a game-high of 25 points while shooting eight of 16 from the field and added 11 rebounds. Ajare Sanni tallied 12 points on four of 17 shooting. The Gauchos shot 23 of 59 from the floor (39 percent) and shot two of 13 from 3-point range.

The Gauchos look to bounce back on Saturday for a matinee affair with the Chicago State Cougars back at the Thunderdome. They look to replicate the same success they had in the season opener against San Francisco State with elite levels of shooting and crashing the boards to get their chances at second opportunities.

Expectations: The Gauchos bounce back after their abysmal performance against Washington State and win big against Chicago State. They should look to correct their offensive miscues and look to settle for better shots instead of forcing shots when they lose their dribbles.