Have you ever heard the phrase, “the enemy of my enemy is my friend”? In early October, researchers Isabel J. Jones, Susanne H. Sokolow and Giulio A. De Leo from the Marine Science Institute at UC Santa Barbara explored the benefits of using natural enemies as a sustainable method to control human infections, detailing their findings in a paper published in the journal “People and Nature. Future exploration in the field may allow for the efficient production of vaccines, eradication of certain diseases and discovery of natural enemies that would fight the disease on your behalf.

In fact, your health benefits from natural “enemies” all the time. Communities of helpful microbes on your skin, on your mucosa and in your gut suppress the proliferation of harmful bacteria through resource competition and the production of antimicrobial compounds. Resulting from a new wave of clinical trials, some natural, enemy-based therapeutics have been commercialized, such as the use of probiotics for Salmonella, Clostridium and other upper respiratory infections. Bacteriophages have also received attention as a promising alternative to antibiotics for multidrug-resistant infections. 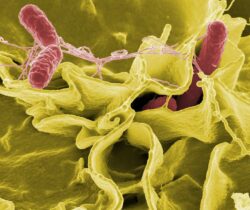 Probiotics have recently been researched as a therapeutic natural enemy solution for salmonella.

As pointed out by De Leo, a Stanford biology professor and theoretical ecologist, “the revolutionary progress of biotechnology has led us to think that there will be a vaccine or a cure for any disease.” While this has proven certainly true in the case of COVID-19, other parasitic diseases such as malaria and schistosomiasis still lack cost-effective vaccines. Chemotherapy treatment is also limited and could, through repeated usage, lead to selection for drug resistance.

“Targeting parasites, pathogens and their wildlife hosts when they are in the environment is a complementary strategy that has so far received limited attention,” De Leo said. “Ideally, use of natural enemy solutions should be integrated in the livelihoods of the human population at risk so that it can provide multiple benefits, from the control of infectious diseases of public health or veterinary importance, to improve nutrition and fight against poverty.”

In addition to serving as a complement to conventional medicine, natural enemy solutions offer co-benefits for conservation and food security.

Protecting some natural enemies could align goals for conservation and improving human health. In North America and Europe, diverse predator communities such as foxes and wolves are associated with lower tick infections of Lyme disease. Protection of the red fox enhances rodent predation and, as a result, tick infection probability decreases. Restoration of wolves indirectly reduces rodent populations by decreasing the fox and coyote populations and even reproductive hosts for ticks, such as deer. 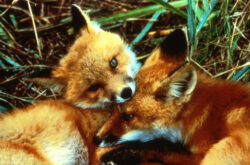 Another example of a natural enemy solution is observed in how protection of the red fox population subsequently increases the predation of rodents, which reduces the probability of tick infections.

If there is so much potential in the research of natural enemies, why hasn’t there been an outburst of research in the field? The lack of investment is clarified by De Leo in his statement that “natural enemy solutions cannot be easily patented, and this might explain why there has been a lack of interest — and associated private research funds — in this direction.”

Though this may have been the case in the past, there is hope for future endeavors. “The development of cost-effective techniques to engineer mosquitoes or snails that are immune to infection, such as CRISPR-based gene drives, is certainly gathering more traction from public and privately funded research,” De Leo said.

He currently advocates for a collaborative approach to the experiments, seeking a joint effort between multiple agencies and donors.

“I personally advocate [for] a collaborative approach between a range of agencies and donors capable of recognizing the integrated nature of the complex relationship between human health, poverty and environmental control and willing to support a specific ‘leg,’ so to speak, of this multi-effort approach,” he said.

The possibilities of medicinal discoveries are endless, and there is much to hope for and look forward to. It is only a matter of time until we see natural enemies alongside common medical treatments. “Looking ahead,” as discussed in the research article, “some natural enemy solutions could complement conventional (chemical drug or insecticide-based) strategies to curb disease transmission by targeting environmental sources of infection.”

A version of this article appeared on p.13 of the November 18, 2021 print edition of the Daily Nexus.