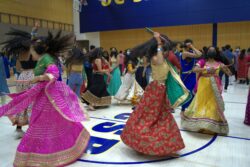 The celebration of the Hindu festival of lights, hosted at Robertson Gym, offered an immersive cultural experience for UCSB students and faculty.

The evening began with the traditional puja — a worship ritual conducted with prayers to Hindu deities — led by Indus Vice President Jishnu Swamy. The puja was followed by dinner, catered from local Indian restaurant Masala Spice.

The event also featured Dandiya dancing, a performance where inner and outer circles move in opposite directions, as participants dance with brightly colored bamboo sticks that are struck together to create rhythm. The night ended with Bollywood music played by the event’s DJ.

Both Indus Co-Presidents Hana Molla, third-year biopsychology major, and Zohaib Suhail, fourth-year chemistry major, said they appreciated the inclusivity of the event, as many non-South Asian students participated in the celebration.

“A lot of South Asians brought their friends,” Suhail said. “They participated in the Dandiya and wore cultural clothes and everything.”

“Even those who did not have traditional clothes wore cropped tops and long skirts,” Deshmukh said.

A variety of South Asian traditions and dance forms merged at the event, said second-year sociology major Reena Khanna, although she noted that she would enjoy having a brief Dandiya lesson offered to all attendees for future events.

“Everyone does Dandiya differently, so it was kind of hard to be in sync with everyone, but overall it was a really fun time,” Khanna said. “They were able to give everyone Dandiya sticks, so that was also good.”

“I had a bunch of friends that aren’t super connected with the Desi community come out, and they had a great time, too, and they’re definitely more interested in attending other events that Indus puts on,” Sinha said.

Khanna compared the school-sponsored event to her family’s own celebration of Diwali. At home, Khanna said her family typically conducts a puja on the actual day of Diwali and spends the following days celebrating with friends.

“To me, [the UCSB event] didn’t feel like Diwali at all, but it was nice to at least do something for it,” Khanna said.

Deshmukh agreed that the celebration differed greatly from the one conducted at her own home but said having so many people present made the event feel more like Diwali.

“At home, we had a really big puja every day and we did a lot of sweets and fireworks … but getting together with other Indian people here really made it feel like Diwali,” Deshmukh said.

Molla described the unique challenges that came along with planning one of the club’s first large in-person events of the year.

“[It was a] strange time to plan such a big event. After being used to being online, I was comparing it a lot throughout the event to what it was like two years ago,” Molla said.

Suhail added that the large turnout of this year’s event and the willingness of attendees to mingle contributed to its success.

“Last time, people were in their little cliques doing [Dandiya] with each other,” Suhail said. “This time there were only like two or three groups and not a lot of people knew each other, so they were just doing it with each other.”

Both Molla and Suhail said that they do not celebrate Diwali at home, so they followed notes from previous years’ events and the guidance of Swamy in planning an authentic puja ceremony.

“Our VP Jishnu was able to actually tell us how puja works, like how the structure of the puja is, when should puja be done or like when people should switch off,” Suhail said.

Sinha said she also celebrated Diwali primarily for its cultural value back home. In organizing the event, she had to dig deeper into her roots to discover the “true meaning of Diwali.”

“I think I’ve been exposed to more of the religious aspect [through the UCSB event]. In high school, we would have Garba and other dance events like that, but it was all just social. But especially being part of the organizing, I got to investigate more of what it [Diwali] meant ancestrally to me which was really cool,” Sinha said.