The Daily Nexus
News
University of California Lecturers Set To Strike This Week After Historic Vote Passes
November 16, 2021 at 6:53 pm by Mark Alfred

Lecturers across all nine University of California campuses will go on strike from Nov. 17-18 following a union vote to authorize a strike, which was approved by an overwhelming 91% of union members on Nov. 13. 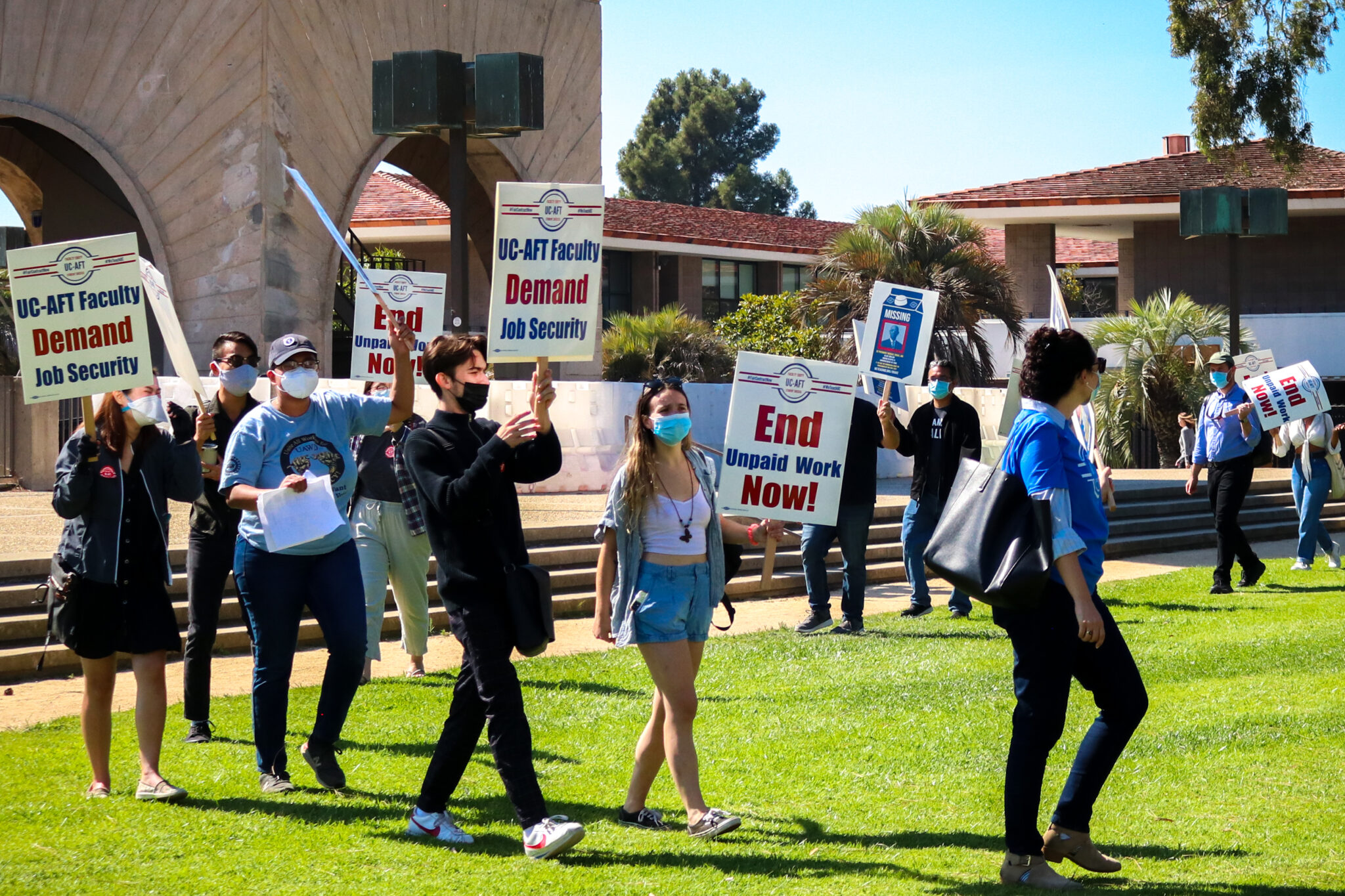 For the duration of the strike, lecturers may legally withhold “all labor” associated with their teaching responsibilities without fear of retribution from UC management. Mark Alfred/Daily Nexus

The University Council-American Federation of Teachers (UC-AFT), a union that represents UC lecturers and librarians, organized the strike — the first since 2002 — in response to two unfair labor practices alleged against the University of California.

Specifically, UC-AFT will strike over the UC’s refusal to bargain over an updated parental leave policy and failure to participate in statutory impasse procedures in good faith. The union argued that the university’s updated parental leave policy would exclude thousands of lecturers from benefits and that the university refused to negotiate this policy.

In addition, the union took issue with the university’s refusal to negotiate an Oct. 11 contract offer until a $500 signing bonus — a time-sensitive element of the contract — had expired, an action that the union argued is illegal.

“President Drake’s representatives unilaterally imposed a deadline for UC-AFT to accept or reject the offer, take-it-or-leave-it, and refused to meet with UC-AFT in an opening bargaining session until the offer had ‘expired,’” the union said in a statement to its members that was obtained by the Nexus. “President Drake’s representatives misrepresented the terms of their proposal in bargaining and in public communications and misrepresented their own conduct in this process.”

“UC-AFT’s Executive Board served notice to UC management that lecturers will strike on Nov. 17 and 18 against unfair labor practices committed by the @UofCalifornia,” the union tweeted on Saturday at 9:21 p.m.

For the duration of the strike, lecturers may legally withhold “all labor” associated with their teaching responsibilities without fear of retribution from UC management. This includes holding office hours, responding to emails, updating course websites, providing remote or in-person instruction and participating in meetings or service work, according to the union.

“Only by withdrawing our labor completely can we send a clear message to the administration that our work is critical to our students’ success,” the union said in the statement.

At UC Santa Barbara, lecturers — joined by students and various senate faculty — will be on the picket line under Storke Tower from 10 a.m. to 5 p.m. for two days, protesting the treatment they have received from UC management. The picket will feature a march through campus, rallies with various speakers and events like yoga and dancing in the later hours, according to a pamphlet advertising the event.

The union said that the benefits of the strike will outweigh any negative effects that may be caused by the disruption to student learning.

“For most lecturers, going on strike for two days will affect their classes as if they were briefly sick or traveling to a conference,” the union said in its statement. “We believe this short-term disruption will bring long-term benefits for ourselves and for our students so we can continue to offer them the high-quality education they deserve.”

The union said that the strike was a last resort they took to ensure that their needs and concerns are met and addressed.

“At this point, given the impunity with which UCOP [University of California Office of the President] breaks state labor law and their cavalier approach to their legal obligations, a strike is the only way to ensure that they hear our concerns and treat lecturers with the dignity and respect we deserve,” the union said.