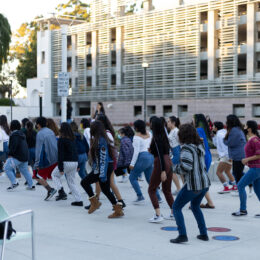 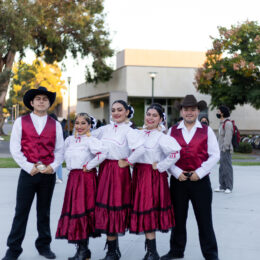 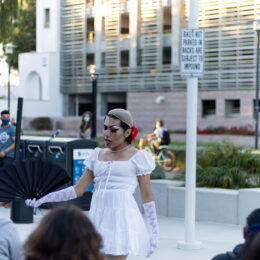 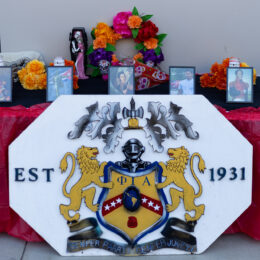 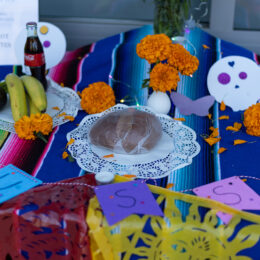 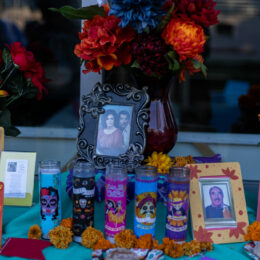 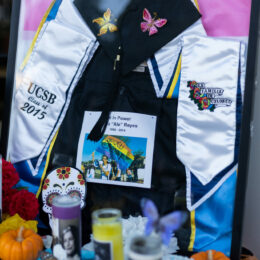 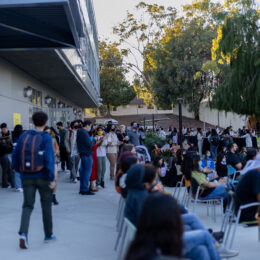 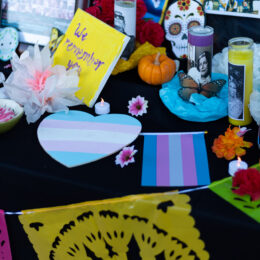 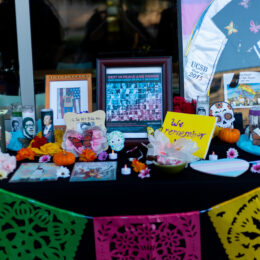 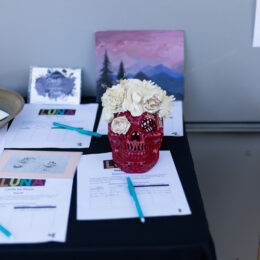 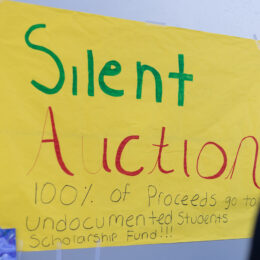 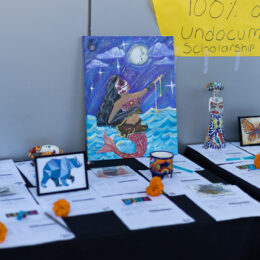 A coalition of organizations collaborated on the event, including the Educational Opportunity Program (EOP), Latinx UCSB Networking Association (L.U.N.A.), the UCSB Department of Chicana/o Studies and Undocumented Student Services.

Student organizations Marginalized Groups United for Justice, Education, and Representation (M.U.J.E.R.), the Phi Iota Alpha fraternity and La Escuelita also worked on the event and were each provided with a table to set up an altar.

The annual holiday, which originated in Mexico and is observed across Latin and Central America, pays reverence to the dead through hosting festivities and arranging elaborate altars with flowers, photographs, food offerings and decoration.

The event began with a ceremonial blessing led by Teotl Goitia from the Resistencia Mexicayotl Chalchiuhtlicue, an Aztec dance group based in Ventura, California. Students joined in a large circle and faced the four cardinal directions of north, south, east and west to honor their deceased elders, children, men and women, respectively.

“They gave us knowledge, and they gave us love. Let’s not let that die with us,” Goitia said.

Afterwards, students offered the names of passed on loved ones to the crowd, which was met with an affirming “presente” in recognition of their life and as a way to “bring them here [and] feel their spirit,” according to Goitia.

Xiomara Lopez, Educational Opportunity Program counselor and coordinator for the Chicanx/Latinx Cultural Resource Center, described the importance of continuing these cultural traditions and providing community and representation for Latinx students on campus.

“My favorite thing is seeing the students come out and have their culture be represented and for them to feel visible on campus. The event is beautiful, but I think more so the feeling that students get of, ‘I’m eating food that I recognize’ or ‘I’m participating in the event, calling out the name of my loved one in the blessing,’” Lopez said.

“My mom would actually make an altar when I was growing up, so the altar would take days on days to make. My mom would sew each flower individually and make designs out of it,” Agama said. “It’s a really good way to remember who your ancestors were because my mom has a candle for every single dead relative that she had candles out for when she was a young girl.”

He also emphasized how “empowering” it felt to share this cultural experience with fellow students, especially as his hometown of Orange County felt “not diverse at all.” Agama added that spontaneously dancing alongside his fellow attendees at the event with “so many different people from different cultures” was an incredibly “unique,” collective experience.

“It feels really nice to see not only a group of people that do celebrate something I do, but an actual institution like the SRB [Student Resource Building] — something formally hegemonic — recognize like a little portion of your existence.”

Lizbet Alvarez, third-year Chicana/o studies and Spanish double major and member of M.U.J.E.R., expressed her gratitude for the event.

“I am really happy because I have never seen anything like this on campus before … It was like a little piece of home here,” Alvarez said.

This marks the eighth celebration of Día de Los Muertos at UC Santa Barbara, which began in 2014 when a group of Latinx faculty members founded L.U.N.A. and started the tradition.

Viviana Marsano, UCSB’s director of civic and community engagement, Isla Vista liaison, and senior advisor to campus organizations, said the community response has been “phenomenal.” She emphasized the value that the event has in providing education to the broader community and in allowing for an inclusive exchange of cultures.

“One year, we had the Muslim Student Association [attend], and they did their version of their altars. So, it’s a great way to get everybody involved and learning about each other’s culture,” Marsano said.

“I hope that [administrators] can see the value of this event, so that other departments, student affairs could possibly think about contributing,” Lopez said.