The Daily Nexus
Events
Violinist Vijay Gupta and Essayist Pico Iyer Take the Stage at Campbell Hall
November 3, 2021 at 10:08 am by Eleuthera Wang 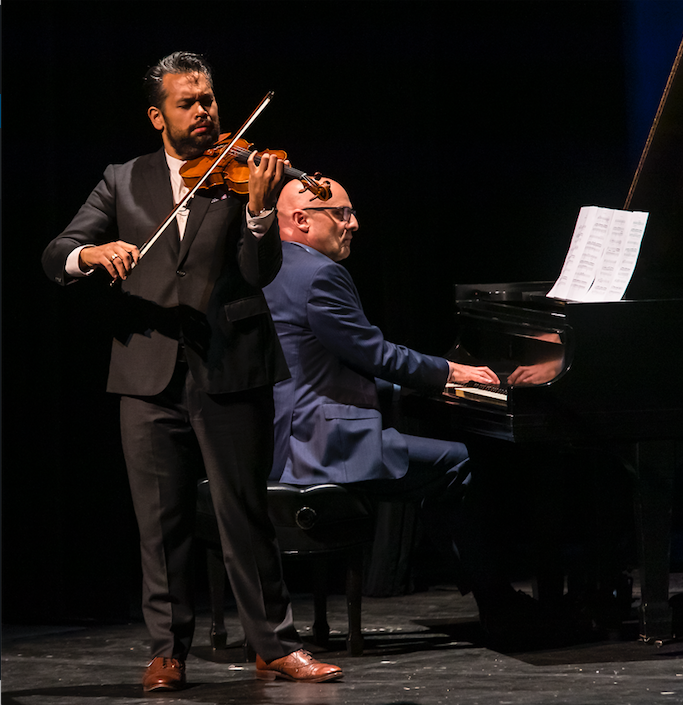 Iyer has been a full-time writer since 1982, after a decorated educational journey from Eton College to Oxford and Harvard University. He has written a number of books, ranging from religion to globalism and the Cuban Revolution, as well as a wealth of articles for magazines like The New York Times, the Financial Times and The New York Review of Books. Though Iyer primarily lives in suburban Japan, he is hosting a trio of talks with various accomplished artists here at UCSB aptly named “Speaking with Pico.”

Gupta joined Iyer to discuss his background in music, philosophy, social work and biology. Gupta has performed in the LA and Israel Philharmonics, collaborated with other top performing artists and recorded numerous albums of both contemporary and classical music. In 2018, he received the MacArthur “Genius Grant” for his work founding Street Symphony, a community of musicians bringing classical music into the heart of the homeless population in Los Angeles.

Gupta and his piano accompanist opened the event with a soul-stirring performance of the piece “After a Dream” by Gabriel Fauré. The soft tones of the piano and Gupta’s virtuoso brought the song to life in front of the quiet audience, which numbered about 50 to 100 people.

During his conversation with Iyer, Gupta mentioned that once he started succeeding in the classical music industry, he felt like he was realizing his father’s unfulfilled dream of being a musician. He also talked about the struggles he had with his family, as they held a firm belief of “you have a choice, you’re going to be a doctor.” However, his family’s desire for him to go into medicine did not discourage him, as he thrived studying two degrees at the same time — a master’s in music from Yale University and a bachelor’s from Marist College. Gupta was also encouraged by scientists working in the same neurology lab as him to pursue music as a career.

During his thought-provoking conversation, Gupta frequently intermixed snippets of solo violin pieces. He played the third movement of Tchaikovsky’s Opus 35 — which he noted as being “what nostalgia sounds like” — to demonstrate how he needed to grow up to fully understand the meaning of the piece, which was a message his violin teacher impressed on him when he wanted to learn the piece at a young age. He also played the andante from Bach’s Sonata No. 2, which Bach wrote for the unaccompanied violin, noting the distinct four voices that the violin plays in the piece.

Iyer’s thoroughly researched open questions to Gupta, opening the door for much philosophical thinking and advice. Gupta, though only in his early 30s, has lived through many enriching experiences and shared with the audience many of the beliefs that have led him through life. From childhood, he has been interested in the myths and stories of Hinduism, so much so that during violin practice he would prop open books of Hindu stories between books of études and scales.

Gupta also discussed his philosophy of making justice a “sadhana,” or a daily spiritual practice. This is what spurred him to use his musical career as a force for good. His work creating the Skid Row Arts Alliance and Street Symphony was born out of his desire to create a conversation and a reconciliation with the audience that those who benefited from the organizations played for.

He closed the event with a violin cover of Leonard Cohen’s “Hallelujah,” a piece of personal significance to him. He invited the audience to sing at certain points, causing Campbell Hall to unexpectedly fill with voices singing the familiar tune.

Gupta’s most recent project was an eclectic album, “When the Violin,” formed by a narrative of changing collective pain into hope and healing. In the spring, Iyer will host talks with writers Erik Larson and Elizabeth Strout as a part of his Arts and Lectures series.