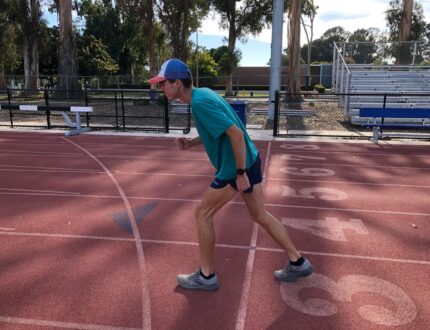 The previous record for the 8K course had stood since 2014, set by David Perry of the University of Portland in the West Coast Conference Championships. Randazzo shaved one second off Perry’s seven-year record to run the fastest time ever achieved for the course in a time of 23:24.2.

“All of us were a little surprised just how fast it was,” said Zachary Parker, a standout second-year competing in his first season of cross country with the Gauchos. “We all expected him to run something like that. We knew he was super fit the last couple weeks. We expected it, but it was still really, really, fast.”

The race, hosted by Santa Clara University, boasted strong competition with Randazzo’s leading performance landing the Gaucho men in third place as a team. Portland State took home first place, while the Gauchos’ rivals, the Cal Poly Mustangs, edged them out for second with a narrow 5-point lead.

The result represents an all-time best over 8K for Randazzo and brings him to his second win of the season; he previously took home the individual title at the UC Davis Stump Invitational earlier this fall.

Randazzo’s win displays a progression from his 2019 performance at the Bronco Invitational, where he placed second to Utah Valley’s Kevin Lynch.

“It kind of took me by surprise,” Randazzo said on learning he had set the course record. “That wasn’t even on my radar going into it. But I think it’s pretty cool definitely because it’s a course that we go to a lot as a team, so we get to see a lot of compared times and how we stack up. A lot of people run the course, so it’s pretty cool that I can say I have the fastest time.”

The fifth-year Gaucho is competing in his final season of collegiate cross country, and his stellar performance has his coach looking towards his future. Shayla Houlihan, previously a coach for Under Armour’s elite professional running group Dark Sky Distance, and now in her first season coaching the Gauchos, explained what Randazzo’s course record entails for him moving forward.

“It means a lot. It’s huge. Especially since that course record was a long-standing record,” said Houlihan. “There were a lot of really good men in that race when it was previously broken. So seeing now that that’s the trajectory he’s on, mixing it up possibly with men that are running professionally now on professional teams with contracts, I’m thinking big picture for him.”

Randazzo’s performance earned him his seventh Big West Cross Country Athlete of the Week Award, the conference announced Tuesday. Randazzo and the rest of the Gauchos will be looking to take home the upcoming Big West Conference Championship title on Friday, Oct. 29, at UC Davis.