Beginning with the first game of the week, the UC Santa Barbara men’s soccer team took on the UC San Diego Tritons on their home turf on Wednesday, Oct. 13. 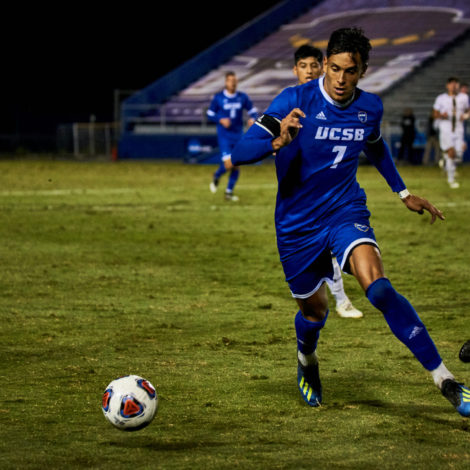 The Gauchos took an early lead against the Tritons in the fifth minute and never looked back. Senior forward Ameyawu Muntari crossed in a corner, which then took a couple of deflections before falling to junior center back Henry Davies who banged in the goal from close range.

By the numbers, the Gauchos narrowly controlled the game. The Gauchos had 16 shots as opposed to the Tritons’ 11 and had 1 more shot on target than UC San Diego’s 4.

Although the Gauchos had 8 fouls in the contest, they managed to avoid drawing any yellow cards. Another notable achievement was that this was the Gauchos’ second straight clean sheet and their third shutout in league play.

The next league game took place against rival Cal Poly San Luis Obispo. This game was a slugfest as both the Gauchos and Mustangs didn’t manage to score throughout two overtimes.

The game was very choppy as no one was able to gain control in the first half of the game until the Gauchos finally started to control the game in the second half.

The Gauchos controlled the game in the second half, but Cal Poly presented more of a threat as the procession did not lead to chances but only opened the Mustangs’ counterattack.

For the second game in a row, junior forward Thaabit Baartman had the most shots in the game for the Gauchos with 5 shots, and unlike in the previous game, he managed to get 2 shots on target.

The game, by the numbers, was similar on each side with the same number of shots and the Gauchos having 1 more shot on target with 3.

One area the Gauchos look to improve in for the next game would be the execution with set pieces, as they managed to get 10 corner kicks in the contest with no goal coming from them.

One positive from the game was that the Gauchos’ defense was able to keep its third consecutive clean sheet and fourth shutout in league play.

The Gauchos sit at the top of the Big West Conference with 14 points, 3 points clear of second-place Cal Poly.

The Gauchos will look to extend their unbeaten run in the league to eight games and stay atop the Big West standings.